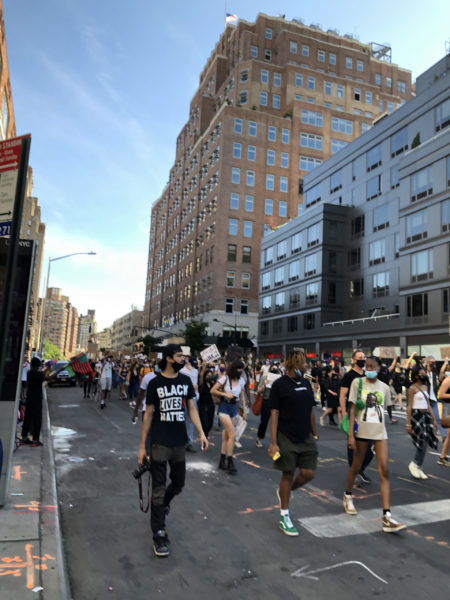 Those sounds in Manhattan at the moment are low flying helicopters and surprise-fireworks, a jazz band and the marching of young feet.

Let me explain. My recollections of my time in Lebanon in my last dispatch applying to NYC were oddly prescient given the unpredictability of the scene here.

One change is the addition of fireworks: not in the traditional out-over-the-Hudson River sense but more an out-your-window sense. Allegedly they’re part of the protests but these aren’t kiddy firecrackers – they’re of the heavy megaton professional sort and they’re let off just about nightly above residential streets here in Chelsea and between apartment buildings around the city. This was also reported on in the Times.

Don’t get me wrong – I enjoy an ear splitting airburst at 2 a.m. a hundred or so feet from my window as much as the next guy but for pets fireworks are Armageddon so I found myself hunkered down in a cupboard with a trembling, whining and slightly leaky little dog in sheer terror lately. “Detonate Against Racism” is not a slogan that will get the pet vote.

They’re watching the marches, one of which I saw approaching up 8th Ave and had time to get downstairs to with my trusty, furry sidekick – recovered from his fireworks trauma by then – and was able to interview an attendee. I also heard them coming because – and I am serious here – they were accompanied by a talented New Orleans jazz band. With a sousaphone, even, which I always like. My interviewee, a white teeny bopper Gen Z (20, N.Y.U., sociology) gave me a lecture about inequality and poverty which evidently she knew a lot about since the poor lass couldn’t even afford a bra. Dreadful. We couldn’t talk long because a march is a march and she had to go before the boys got away but I remember it well because as a writer I have a pornographic memory.

BLM is equally suspicious. As political writer and philosopher Eric Hoffer describes: What starts out as a mass movement ends up as a racket, a cult, or a corporation.

My evidence for BLM being in the racket stage is their stated Israel-Palestine policy which apparently has something to do with white cops shooting black Americans but I can’t work out how. Their Israel-Palestine “Solution” is unnervingly close to “Final” when it comes to Israeli Jews.

The “racket” part is evinced in a similar context by a fraud as blatant and enduring as homeopathy who popped up (again!) lately: the Reverend Al Sharpton who has his aged, phony face all over anything in front of a camera.

Al is front and center of all this, of course. The Reverend (always a prefix that screams: GRIFTER!) Al is locally regarded in New York as a con-man of such expertise he’s at an Olympic level of grift only surpassed by our native son and great orange con-god himself.

It occurred to me that if the young marchers actually cared about racism they’d tackle it at the institutional level: by helping people vote, encouraging and lobbying for postal voting, or going door to door establishing repeat in-person voter contacts (which work, by the data metrics of these things) thus ensuring the non-racist party had a chance at power.

Or, given their age and voting statistics – just lining up to vote themselves.

Or ….they’d demonstrate or work against the most racist (and insane) aspect of our legal system: the War on Drugs.

I know a little about that because after my life on Wall Street I changed career direction to defend people of darker skin color than myself in the courtrooms of NYC where I was a low level – a very low level – defense attorney. It is crazy-making and horrible to represent young, minority men staring down the barrel of prison – prison – for “crimes” I regard as a decent Friday evening’s chemical entertainment. The entire edifice of the W.o.D. – and the cash bond system – are inherently racist for a number of reasons I’ll delay for another article or a large book.

In the bigger picture they could work towards shifting school funding from the local level – where poor neighborhoods get crappy schools – to a system whereby schools are funded equally by the state which is how it is done in most civilized countries. Much of our generational inequality can be traced back to that huge discrepancy.

They’re marching in the right direction but barking up the wrong tree, if you’ll pardon my metaphors, when it comes to “racist police shootings”.

Every shooting in America is a tragedy of course but by the data there is evidence to suggest that racist police shootings are a moral panic not backed up by the numbers. It appears that when controlling for police encounters black people aren’t shot more by cops than white people although they are assaulted and “drawn on” much more frequently. The problems are “upstream”, more central than just this issue. I refer to a discussion by liberal Harvard professor and polymath Steven Pinker and Sam Harris’ podcast on this topic.

Nevertheless, the entire effort is no doubt a step in the right direction. Hopefully the marchers will be successful in their task of stomping and marching away racism, as well as cancelling in-group/out-group thinking in the human brain. And altering the serotonin that has regulated such thinking since before we were primates.

Plus, that pretty young marcher I met will finally be able to buy a bra. 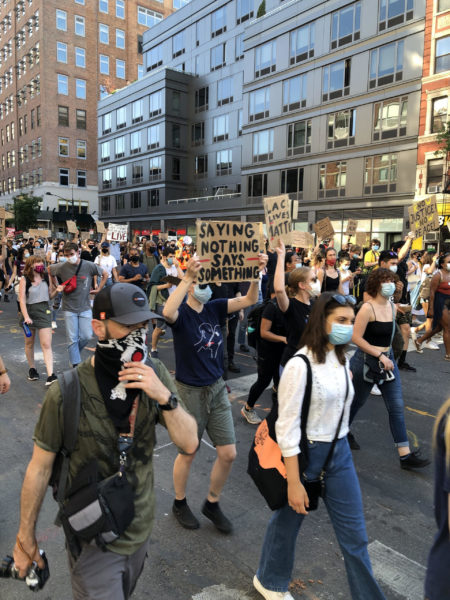 David Anderson is an Australian-American attorney in Chelsea, New York City. Prior to writing he worked on Wall Street before an unspectacular few years as a criminal defense attorney in Queens and Manhattan.