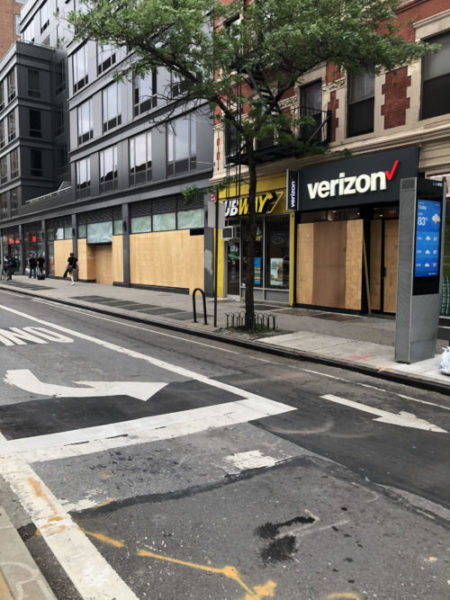 “A heart in New York,
A love in her eye,
An open door and a friend for the night.”

There’s an intimacy between strangers under the surface these days, especially among the “pro-social” cohort of our citizenry. The rest is the usual rotting-in-the-heat New York garbage and more aggressive rats starved of the pizza they adore.

There’s the demonstrators, some percentage of whom have little interest in the inherent injustice of our society. In the last few years there have been equally as monstrous police deaths as George Floyd such as Freddy Grey and even our own Eric Garner of Staten Island. All these outrages caused demonstrations but not at the scale we’ve seen.

The differences now are manifold: there are a lot of recently unemployed, frustrated people and the protesters trend towards younger folks, their marches are on almost daily. Pleasingly most are masked and, since social distancing is difficult, at least walking in the same direction outdoors.

Young people cooped up in their apartments, or worse their parents’ homes now have a reason – a damned good reason – to get out of the house for a legitimate and worthwhile moral cause, covid19 be damned.

The rioting and looting is another matter and was surprising. Herein masks are relevant and, as always, human psychology plays a part. Masks provide anonymity lowering both accountability and the bar for misbehavior. It is for that exact reason there are (still on the books theoretically) stringent laws against wearing masks in NYC anytime except Halloween. These laws have been enforced for some decades now, aimed at demonstrators for the very reasons stated above. Contributing to the madness is the fact that masked offenders are hard to be legally identified either in court. by camera or (presumably) by AI face identification technology.

I saw the rioting from my balcony. At amazing speed after a demo around Union Square/14th St. under cover of darkness maybe two dozen young men smashed into a Verizon phone company store, looted it and ran. (See photo). They ran northwards up Eighth Avenue, considered other stores briefly but left them untouched before dispersing.

Consider the thought process there: presumably somebody shouted: “What are we gonna do after the march?” (Or instead of it) and then some bright spark replied: “Oh, howza’bout we break into a cell-phone store and steal the most trace-able, identifiable and expensive technology you can buy retail?”

“Well why not?” answers another dumbass.

All this – also surprisingly – without a cop in sight. I spoke to some NYPD guys earlier on my dog walk who were hunkered down defending their precinct one block away. Which is totally understandable when you think about it. Consider yourself as a cop observing a large angry mob at speed looking to steal electronics from some billionaire’s cellphone store ….verses ….your life. Do the math.

The mob that night on Eighth didn’t seem to hurt any humans, thankfully, but did a lot of damage to the marcher’s cause by allowing the Murdoch media to conflate protesters with criminals. And Tucker Carlson did just that broadcasting nearly an hour of riot related social atrocities – contextualizing them as the norm. I presume barking mad Pirro and God-of-the-Stupids Hamity did also but I’d all done puking at this dishonesty and manipulation by then and retired to bed.

This all lead to the disheartening and unnecessary boarding up of many storefronts’ windows – now sealing in about a quarter of our local stores. For Mom and Pop businesses like my Yemeni friend’s deli in my building it is precautionary: $500 worth of boarding up verses the risk of thousands in broken plate glass. For larger, insured players like CVS, two banks and the inter-galactic Google Headquarters (across the road, see photo) all it does is unsettle the locals and — pursuant to the “broken windows theory” of law compliance encourages greater societal collapse. But when have well connected, lobbied-up billion dollar mega-corporations ever cared about society at ground level?

I’ve spent time in some hairy locales in my life, the most recent being Lebanon about a dozen years ago where they were hospitable enough to put on a small war between Hezballah and Israel conducted very much “over my head”. There it was a uniting phenomenon in part because the “enemies” were (unpopular with non-Shi’a) Hezballah and the Israelis (unpopular with everybody) but in NYC now there’s a different dynamic. A plague and civil unrest differ psychologically and happily our city doesn’t have that “going down the tubes” dynamic Beirut had.

Other changes in Gotham: the city took away all the trash cans so they couldn’t be used as projectiles – which was very irritating but now they’re back and there were a LOT of helicopters hovering over Manhattan in the afternoons. There are also more bicycles around – presumably people are afraid of the subway which is working as well as normal even but with (90%) fewer passengers and the interiors are hilariously squeaky clean! Also more birds are about, more birdsong and much fresher air, which we love. There’s a general trust in our Governor Cuomo and Mayor “Big Bird” de Blazio isn’t screwing too much up.

Of course at the federal level incompetence and corruption have been elevated to high performance art by our psychopathic president, his crime family and their gang of thieves. So in deep blue New York we’re looking forward to throwing the bums out in November. Which is what all the marchers should be more focused on or to quote our last decent president: “Don’t boo, VOTE!”. March, sure, but VOTE!

The administration is, however, very competent at de-funding, screwing with and otherwise strangling the US Postal Service – and watch this space – print this out – with the objective of damaging postal voting in November. You heard it here first so somebody tell me what evil little sycophant in Trumpworld thought up that idea and I’ll get the horsewhip.

Further, as a friend of the “faith community” the administration is making sure clergy have their snouts at front of trough for pandemic relief. Consider that: the fairy tale believers being paid (by, well, YOU) to distribute their nonsense instead of the money (again, yours) rescuing out of work Americans, all while singing, chanting, “witnessing” and otherwise infecting the rest of us with covid. Well praise Jay-sus!

There will be lots of unforeseen and unintended consequences of “all this”. One often overlooked is the sinking compliance of childhood vaccinations against other, more run-of-the-mill less “covidy” diseases like measles, RSV, whooping cough and the ‘flu. So in addition to Covid 2.0 – The Second Wave later this year we can also dread those diseases roaring back and they’re way more transmissible.

Another thing you’ll see – I think – is a massive banking crisis in the Collateralized Loan Obligations area soon-ish. Never heard of them? Well you will. They’re an obscure debt instrument that hundreds of companies are utterly leveraged into to the toll of trillions: this thanks to “light touch business regulation” of the securities industry by the “business friendly” Trump humps.

Again, another looming disaster will be caused by “banks-gone-wild” (nobody’s favorite porn)…and them having no “skin in the game” (N. Taleb). I’m no expert, just a well-informed tourist who worked on Wall Street for over a decade as a stockbroker, analyst, VC-ist, securities trader and occasional consultant and lawyer.

The take aways here are: get your (grand) kids vaccinated as normal.

David Anderson is an Australian-American lawyer in NYC with an education in (Middle East) politics and psychology and a career background in finance and law. He was recently amusingly featured on Professor Jerry Coyne’s blog “Why Evolution is True” which can be viewed here.