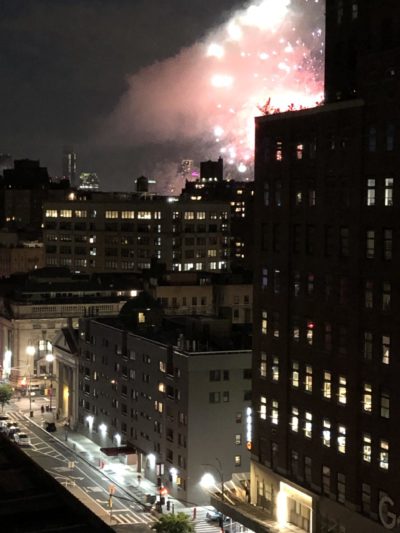 “Pity the nation that acclaims the bully as hero,
and that deems the glittering conqueror bountiful.”
Pity the Nation, Lebanese poet Kahlil Gibran

NEW YORK CITY — If I’m asleep between 2-6am – which is rare because I like that quiet time to work – I’m jolted awake by the fireworks most nights followed by a doggie panic around my apartment. These are free-lance fireworks between the buildings: loud, bright and with enough ballistic heft to shock and they’re supposedly part of the protest movement we’ve been seeing a lot of lately.

As I wrote earlier: for pets fireworks are Armageddon but it is also crazy-making for us humans here since the air-bursts are outside our windows. These are not professional displays way out over the Hudson which were cancelled this year, these are close, at all hours and set up by kids who want to do emotional stuff.

It reminds me of Beirut actually. I was there for a while a dozen years ago saying a final goodbye to my friend and mentor Professor Andrew Vincent when there was a small war on. Years before he helped me get my scholarship to Georgetown University in Washington D.C. after which I happily remained in America – all this 25 years ago. Later I was the best man at his wedding in New York which I organized and we visited each other over the years frequently. It is valuable to have a wise mentor when you are a young man unsure of your future path in the world.

He had an interesting life: he grew up in Australia and also lived in Lebanon during the civil war, only leaving in 1983 when they started kidnapping and killing Westerners, Australians like him, at a vicious clip. That war (1975-1980) was all bearded young men with machine guns and exploding Mercedes.

I met him at Melbourne University in Australia in 1990 where he was my Middle East politics professor. Decades later back in Beirut, since he had no children or siblings he was thankful I took the time to travel to the Beirut he’d returned to during his final, sad, lung-cancerous days in 2008. That was haunting as we’d always smoked together – in fact it was over cigarettes after class we became friends but his last words to me were “David, don’t smoke anymore, please.”

The 2008 the war between Hezbollah and Israel which visited at the same time I did was of a lesser volume and viciousness than the main Lebanese Civil War decades earlier which ripped that little country apart. In 2008 there were machine guns, assassinations, random bombings (Mercedes, again, the best car bombs by far) and frequent strafing by Israeli jets. Lots of that. And the jets would target weird stuff like round-abouts and overpasses, the water company office and other infrastructure but not, thankfully, the American University of Beirut where I was staying at Professor Vincent’s apartment. The key to my safety was probably the “American” part of the university’s name: it is one of the most venerable universities in the Arab world.

I loved Lebanon despite the personal tragedy of my visit and the inconveniences of the war which, like here now evinced a citizenry deranged by unpredictable circumstances.

Nevertheless the slow moving disaster that has been the last 45 years of the Lebanese Republic should serve as a warning to multi-ethnic countries who can’t “get it together” – like ours now – treat people equally and an even more dire warning against magical thinking of religion.

Lebanon is a small, beautiful country and because it is run mainly by religious law it is as fascinating as a science experiment for an atheist like myself to observe. If you base your civilizational architecture on Iron Age fairy tales and tribalism you too can break your country, ruin your economy for decades and kill hundreds of thousands of your citizens. And thaaaat’s “faith”.

In fact – by just about every metric the more religiously observant a country is the worse its outcomes and metrics; everything from maternal death rates, murders, income, self-reported happiness, corruption and oppression: piousness to religious ideals spells disaster. The *most* pious countries are genuine failed states; think Pakistan, Afghanistan and Somalia. Within the US our reddest, most Chriiistian states lag in every indicator of human flourishing.

Here in Manhattan – even at their worst – the fireworks aren’t as bad of course, unless you are a pet. And despite the pearl clutchers who portend the end of our civilization we’ll get through this like all the other crap we endure periodically in NYC. The fireworks and the civil disruption, the looting (I wrote about) and the virus are just bumps in the road because our (theoretically secular) country is rich and resilient. My experiences in Lebanon aren’t PTSD worthy – more just weird – but that jolting awake by nearby explosions reminds me of it.

BUGGER! THERE GOES ANOTHER ONE! Bangs – these ones with visuals – red and green starbursts like the Lebanese flag strangely, above 9th Avenue tonight and every night and LOUD!

Now let me stub out this cigarette and tend to my trembling dog…..