Posted on May 14, 2022
You are here: Home / Featured / What “Pro-Palestine” Student Groups Get Wrong 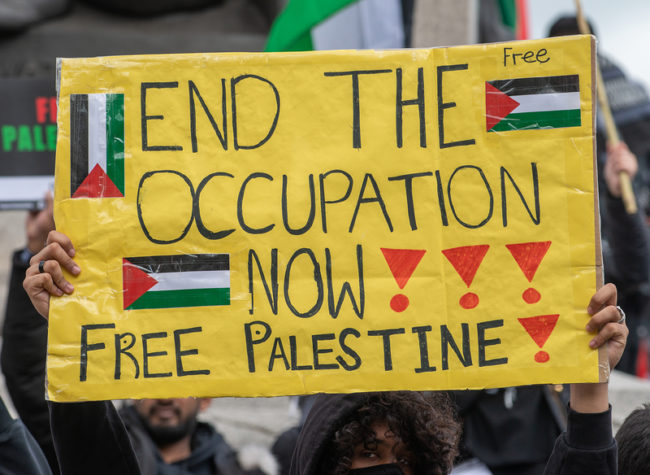 Go to any liberal college in America and it won’t take you long to find the “Solidarity with Palestine”, “Decolonize” whatever, or more honestly “Let’s beat up Israel with our ignorance” groups. And they are so earnest and angry in their “victim” valorization.

Virtue signaling showing “allyship” with the oppressed gets them the girl or the boy and establishes their empathetic bona fides and moral purity. Who knows, maybe some of them actually care about Palestine? If so you’d think they’d learn more about it.

Part of this valorization of the Palestinians started in the 1970s where the Western press fell in love with charismatic terrorists like sexy (double hijacker) Lela Khaled and gangsta boss Yassir Arafat when hijacking was heroic, had elan and was pretty safe before 9/11’s religious apocalyptic madness. Religion poisons everything, even hijacking.

Back then – as now – this fit into a “colonialist” narrative of European Jews oppressing Arabs – an easy, eye pleasing but intellectually lazy fit. This despite the fact 50% of Israelis are Mizrahi/Sephardic (Middle Eastern) Jews and the arriving European Jews were refugees.

This bias of most of the Western media and all of TV continues today: in a current example, for over a month there’s been special trouble in Israel the cause of which is now unmentioned: “JERUSALEM – A gunman on a motorcycle opened fire in a crowded city in central Israel late Tuesday, methodically gunning down victims as he killed at least five people in the second mass shooting rampage this week.” The only part of the story still around now is the Israeli reaction to this, as always typecast as “Israeli aggression”.

The wider context here is that the 20% of Israelis who are Arab, and many of those living in the Occupied* Territories can practice their professions, religions, become educated at government expense, ditto medical care, hold a national passport, run for office and many can even serve in the police and military.

They can be openly gay or trans (within Israel) and women initiate more divorces than men do. They can strike, demonstrate and write crazy stuff online no problem. Try pulling any of that in Tehran, Baghdad or Riyadh. Try it in “Occupied” but Palestinian run Hebron or Gaza!

The reason? The Arab countries came together decades ago and decided if they made life easier for Palestinians it would hurt the Palestinian cause (and damage fake Arab solidarity, the need for a common enemy and a grievance against the West).

Within Israel in the West Bank and Gaza – self ruled prototypes of a Palestinian state (and recognized as such by 138 countries, the “Palestinian Authority”) there are no “slutwalks”, “take back the night” marches, and definitely, absolutely, no pride parades: they’d be stoned death marches, and not the fun, campus stoned. Most of the suffering of Palestinians comes from their own wildly corrupt administration of thieves and their Arab “brothers”.

Sure there are checkpoints for Palestinians wanting to, wishing to, dreaming of and allowed to work in Israel proper but these checkpoints — and the “Apartheid”** wall – are all a consequence of almost unceasing terrorism directed at Israeli civilians. Hamas and Islamic Jihad, the now permanent dictatorial rulers of the West Bank and Gaza call for the complete destruction of the Israeli state in their founding charters.

Judenfrei genocide is their most fervent, avowed wish and they pay generous monetary benefits to the families of suicide bombers. Not a lot of “diversity” or “equity” there and they’re all out of “inclusion”.

Israelis don’t do that, nor use children as human shields: they just want to buy a pizza or catch a damn bus without being exploded by religious maniacs. Israel has ceded strategic lands (South Lebanon), in one case larger than Israel itself (Sinai) just for peace. We don’t see that offer of coexistence from the P.A.

Again, Islam helps makes everything worse. Many peoples on earth are either oppressed or feel so. But where are the Tibetan suicide bombers? Why didn’t black South Africans use children as human shields? Are there any martyrdom suicide cults outside the Islamosphere?

Palestinian “allies” love to yell about Palestinians being dispossessed of their land when many were simply bought out, yet have — to a person it seems – never heard of the 800,000+ Jews in Arab lands forcibly expelled from their homelands after 1948 who, if they escaped alive from places like Iran, Iraq, Egypt, Algeria, Yemen, Morocco, Lebanon, Syria, Libya etc. left with only a suitcase and garbage refugee passports. Where’s their land? Where are their reparations?

Basing everything on easy to see skin color is a special kind of intellectual retardation practiced by the left (and right), most recently exhibited in our own country by BLM and its mathematically, statistically challenged worldview. And, like BLM’s, such a worldview is devoid of thought, facts and is completely racist.

But keep marching and allyship-ing, you Campus Social Justices youse. To be you must be so morally pure and infused with light and wisdom. Don’t worry about facts or history, it isn’t like you’re at university to learn.

*”Occupied” because of Arab initiated wars which Israel ultimately won.
**Accusations of “Apartheid” is prima facie proof of deep ignorance, by the accuser, of both the Middle East and Apartheid.

David Anderson is an attorney and writer living in New York City.