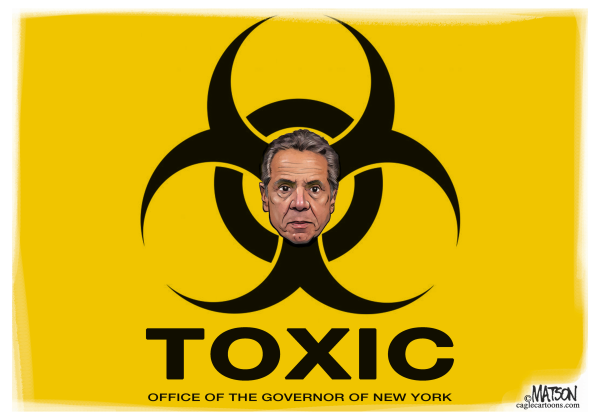 As many analysts predict that New York Governor Andrew Cuomo’s days in office are numbered, and his political career over, the beleaguered Cuomo got some more bad news: President Joe Biden called on him to resign.The reason: a New York Attorney General’s report that found Cuomo had harrassed 11 women.

Hours after the release of a 165-page report that detailed numerous allegations against Cuomo, President Biden said he believed the Democratic governor should resign, echoing a chorus of similar calls by other party officials. Assembly Speaker Carl E. Heastie (D) also said Cuomo could no longer remain in office, adding that state lawmakers will move forward “expeditiously” with an ongoing impeachment investigation.

Investigators laid out a devastating portrait of Cuomo’s behavior and extensive examples of unwanted physical touching, including an incident last November in which Cuomo allegedly embraced an executive assistant and reached under her blouse to grab her breast. Witnesses also described an environment in the governor’s office that was abusive and vindictive, with one of the women who came forward targeted for retaliation through the release of her personnel file, investigators said.

Cuomo’s televised response to the report in which he said he will not step down apparently fell flat among the pundits and on social media. He also dabbled in some “whataboutism,” Mediaite notes:

New York Governor Andrew Cuomo has a lengthy response to the findings of the New York Attorney General’s Office that includes photos of himself and other prominent politicians hugging and kissing people.

The investigation concluded that Cuomo sexually harassed 11 women. In his on-camera statement Tuesday, the governor said, “I never touched anyone inappropriately or made inappropriate sexual advances.”

One part of Cuomo’s defense included him claiming that images of him interacting with women have been “weaponized” against him. He proceeded to show pictures of himself being close with a variety of individuals over the years, giving some of them kisses on the cheek and the forehead.

The written defense [PDF] from Cuomo’s attorney addresses how he interacts with his staff, and makes comparisons to other prominent politicians.

“He is informal with his staff and banters with all employees, again, regardless of gender, in an effort to bring collegiality and levity to their high- pressure and demanding positions. He is interested in their lives. His close staff members have become his family, which is not uncommon when working in politics,” it says, citing reports about staffers to former President Barack Obama and Senate Majority Leader Chuck Schumer.

This too includes photos of himself hugging and kissing many people, but goes a little further to say, “Democratic and Republican politicians, male and female alike, use handshakes, hugs, and kisses to connect with others.”

As evidence of this, Cuomo’s defense includes photos of the following people hugging and/or kissing people:

If anything, this will turn many in both parties more against him since these other politicians haven’t been accused of sexual hassment once, let alone multiple times. Will he try to stay in office? He can. Is he likely to win re-election if he runs? Highly unlikely.

If you're against prosecution for Donald Trump and for Andrew Cuomo, then you're a hypocrite. Both are entitled rich boys who have abused the common people for their entire careers.

Cuomo must resign. The Democratic Party can carry many burdens but this is not one of them. Resignation is not an act of punishment, it is a duty of responsibility and obligation. The whole of Trumps National Conservative movement that is at war against democracy is looking at

The President. The Senate Majority Leader. The Speaker of the House. Both Democratic Senators from New York. And more prominent Democratic leaders have called on Cuomo to resign.

Compare that to how Republicans have treated over 25 allegations against Trump for the last 5 years.

Pelosi calls on Cuomo to resign in statement: "Recognizing his love of New York and the respect for the office he holds, I call upon the Governor to resign."

Allow me to address the elephant in the room: Two of Trump’s friends are vying to become Governor of New York so they can pardon Donald and his spawn.

Let’s go after Andrew Cuomo, but get Donald Trump first.

NEWS: The Democratic governors of Connecticut, New Jersey, Rhode Island and Pennsylvania said New York Gov. Andrew Cuomo (D) should step down in the wake of a report on sexual harassment.https://t.co/WOlHCVNePR pic.twitter.com/TvhvP88opo

The staggering thing about today's report on Andrew Cuomo isn't the number of high-level officials now calling for his resignation but how Cuomo got through almost 3 full terms as governor without his abusive behavior being revealed and condemned.

President Biden has the balls to call for Cuomo’s resignation

Tune into Cnn tonight to hear Chris Cuomo not discuss any of this. https://t.co/A7M676mNbo