TURKEY, SYRIA AND OUR IGNORANT PRESIDENT 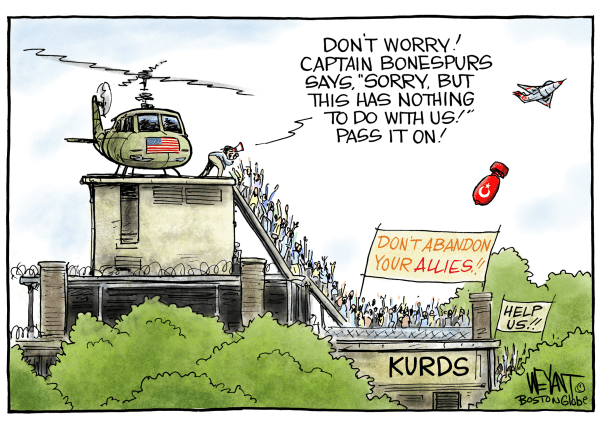 When historians look back, they’ll identify It as the day that the post-World War II order officially collapsed.

It happened not by coup, or by the disappearance of our collective will as a nation, but rather by the perturbed ramblings of a chief executive who has proven he is ignorant of history, unconcerned about the nation’s long-term security, and utterly disinterested in the finer points of policy and international diplomacy.

It was brought to vivid life in a jaw-dropping session at the White House on Wednesday that saw Democratic congressional leaders walk out amid a torrent of schoolyard insults from a sitting president. Trump reportedly referred to Speaker of the House Nancy Pelosi as “a third grade politician,” and taunted both her and Senate Minority Leader Chuck Schumer with “see you at the polls,” as they left.

The performance capped a day that was extraordinary, even by the surreal standards of Donald Trump’s Washington.

It was punctuated by an Oval Office session in which Trump tied himself into rhetorical knots trying to distance himself from the increasingly bloody conflict between Turkey and the Kurds in Syria that he, in large part, had allowed to happen.

Speaking to reporters, Trump denied that he’d given Turkey the “green light” to invade and said the Kurds, who were instrumental in the American victory over the Islamic State, “were no angels.”

On Thursday, Vice President Mike Pence announced a 5-day cease fire that will allow for a Kurdish withdrawal. But as Axios reports, “The agreement gives Turkey what it wants – the removal of sanctions and support for a ‘safe zone’ free of YPG forces that they view as an extension of the Kurdish Workers’ Party, which has carried out an insurgency inside Turkey for decades.”

The House has already expressed its disapproval for the White House’s policy, voting overwhelmingly on Wednesday to condemn the withdrawal.

Trump also netted a rebuke from Wyoming Rep. Liz Cheney, the daughter of former Vice President Dick Cheney and chair of the House Republican Conference, who took issue with Trump’s instance the United States didn’t need to worry about terrorists who were “7,000 miles away.”

Cheney reportedly reminded Trump that the terrorists who brought down the Twin Towers, and crashed planes into the Pentagon and a Pennsylvania field in 2001, also came from 7,000 miles away.

It’s already well-known that Trump is essentially a fourth-grade tyrant squeezed into the body of a septuagenarian. But the exchange with Cheney was a necessary – if incredibly – disturbing insight into Trump’s narrowly juvenile view of global politics.

Listening to Trump, it was hard not to think of similar “America Firsters” from 75 years past who somehow thought oceans could still protect America from the dangers of the wider world.

Then the bombs fell on Pearl Harbor, German submarines began sinking American ships, and the nation learned the hard lesson that oceans were no protection.

America stepped up after those dark days, defeated the Germans and the Japanese; rebuilt postwar Europe and laid the foundation for decades-long alliances; acted as a bulwark against Soviet aggression through the Cold War, and has largely stood as a beacon of both security and freedom (despite a multitude of failings and missteps) ever since.

When Trump threw the Kurds under the bus, he shredded whatever remains of our credibility abroad and tarnished the honor of American fighting men and women who have said, tragically, that they’re ashamed of their country’s conduct. The cease fire while welcome is days late, since hundreds of Kurds have already died.

Trump, who has proudly boasted that he doesn’t need to read to make decisions or to consult with experts, has done damage that may take decades to repair.

And we may all yet pay the price for his great and unmatched hubris.