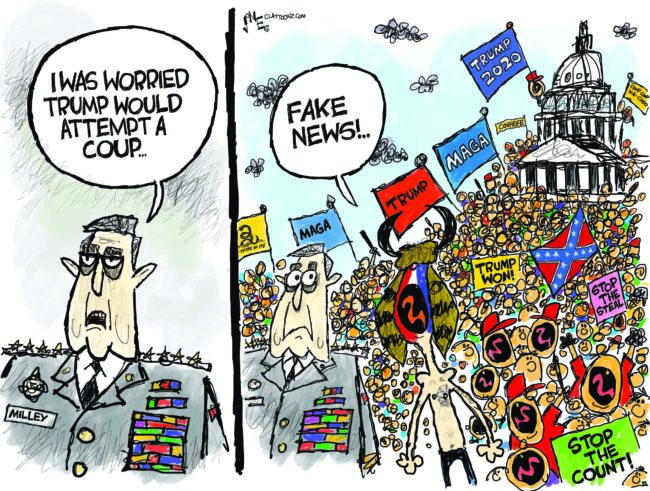 First, let me extend a greeting to General Milley: Welcome to Antifa. We’re glad to have you.

Tonight, expect Tucker Carlson to attack General Milley…again. He’s going to attack General Milley for being worried that between the election, which Donald Trump lost, and the inauguration, Trump would attempt a coup. Tucker and other wingnuts will condemn Milley as though he has committed treason for recognizing Donald Trump’s inclination for treason. Most of all, expect Tucker and other Republicans to call the concern of Trump attempting a coup “fake news.” But the thing is, it actually happened.

General Milley, and so many more of us, were right to suspect Trump would commit a coup attempt…because Donald Trump committed a coup attempt. Also, it was pretty much a Russian coup that put him in power in 2016. So yeah, coup coup ka-choo, baby.

I recall before the 2016 election, hearing Republican nuts claim that President Obama would refuse to cease power or allow a peaceful transition and that he would become a dictator. I thought they were crazy. Then after Trump was elected…I thought the same thing about him. The different between me and those crazy guys is that I was right.

A book will be published next week detailing Milley’s concerns along with a lot of other juicy nuggets, like Liz Cheney slapping Jim Jordan’s hand away during the Capitol insurrection and telling him, “You fucking did this.” Republicans and generals say “fuck” a lot. The book also reports that Trump called German Chancellor, Angela Merkel, a “bitch,” and that he was raised by the “biggest kraut.”

The book is authored by Washington Post reporters Carol Leonnig and Philip Rucker and titled, “I Alone Can Fix This,” taken from Trump’s statement in his 2016 nomination acceptance speech and the kind of thing a fascist dictator wannabe would say. According to the book, Milley told aides the US was facing a “Reichstag moment” because Donald Trump was preaching “the gospel of the Führer.”

According to the book, after Trump lost the election, an old friend of Milley’s warned him Trump would attempt to “overturn the government” in a desperate bid to cling to power…unconstitutionally. Milley replied, “They may try, but they’re not going to fucking succeed. You can’t do this without the military. You can’t do this without the CIA and the FBI. We’re the guys with guns.”

The part about guns is going to make Trump supporters freak out and go out and buy more guns while issuing tough talk about how they’re ready to fight the government that stole the election and that will now come to their doors to inject them with coronavirus vaccine while taking away their guns and Bibles. Trump supporters claim they need guns to protect themselves from the government when what they want to do is use guns to attack the government.

Milley also referred to Trump’s supporters as Brownshirts, which is a perfect way to describe Trumpian Brownshirts. Milley believed long before the insurrection, like many of us, that “Trump was stoking unrest, possibly in hopes of an excuse to invoke the Insurrection Act and call out the military.” There are reports Trump attempted to do this June 1, 2020, the day he had the military use tear gas to clear Black Lives Matter protesters from Lafayette Square so he could conduct a photo-op outside St. John’s Church with an upside-down Bible.

The “Reichstag moment” is in reference to a fire in the German parliament, which the Nazis used to consolidate their authoritarian rule in 1933. It’s widely believed the culprits who set the fire were the Nazis. Setting fires to get credit for putting them out was a Trump tactic. It’s easy to believe he’d set a fire to consolidate his power and become a America’s first fuhrer.

When Trump’s white nationalist terrorists attacked the Capitol on January 6, General Milley referred to them as Nazis and said they were Boogaloo Boys and Proud Boys. He’s right. He told aides, “These are the same people we fought in the second world war.”

Milley was concerned personnel moves that put Trump goons in positions of power at the Pentagon after the November 2020 election, including the firing of Defense Secretary Mark Esper and the resignation of Attorney General William Barr, were the sign of something sinister to come. And why wouldn’t he believe that when the entire four years of the Trump presidency (sic) were sinister.

Before the coup attempt, Milley told aides, “We’re going to put a ring of steel around this city and the Nazis aren’t getting in.” Except the Nazis got in. The Nazis entered Washington in January, 2017, and while a lot of them are in the Fuhrer Bunker known as Mar-a-Lago, a lot more are still in Washington.

Milley was relieved they got Trump out of town without a successful coup, and our new president inaugurated and that “we landed the ship safely,” but we haven’t cleared our nations of Nazis. Also, you don’t land ships. You land planes. You dock ships. General Milley is not an admiral or in the Air Force.

Every week, we get reports of white nationalist terror groups planning another insurrection attempt. The head Nazi himself has endorsed the pillow Nazi’s belief that Trump will return to power in August. There are still a bunch of Nazis, many at a convention in Dallas last week, who believe Trump won the election and will return to power without an election. There are still Trump Brownshirts in Congress protecting Nazis and refusing an investigation into Nazis.

And tonight on Fox News, there will be a Nazi and Brownshirt boy telling us the Chairman of the Joint Chiefs is committing treason for calling out Nazis.

Visit Clay Jones’s website and email him at [email protected]