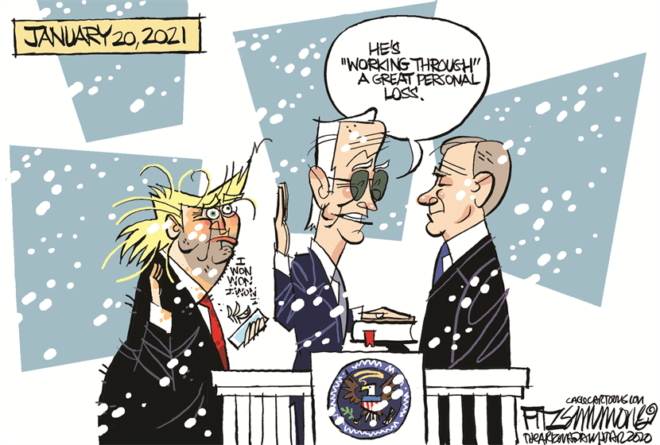 Donald Trump is trying to win the election with every court challenge and tweet he can muster, but he doesn’t really care how many votes he and Joe Biden wind up getting. That’s because the election Trump is determined to win is in November 2024.

Although Trump and his cable-news enablers mock the polls, Trump has known for some time he wasn’t going to win this year. That was clear months ago as he mounted a crusade against voting by mail – his first salvo in discrediting Biden’s eventual victory.

“Mail-In Ballots will lead to massive electoral fraud and a rigged 2020 Election,” Trump tweeted on July 2. Why would he do that four months before the election if he actually expected to win? And the brouhaha about alleged vote-counting irregularities in Philadelphia, Detroit and other Democratic strongholds is only designed to further enrage Trump’s base when Biden is officially certified as the 46th president.

Trump’s goals: (a) convince those who voted for him that the system is rigged and they were cheated, (b) promote conspiracy theories to undermine Biden’s presidency, (c) energize cable-TV and talk-radio hosts who will promote Trump and his brand for the next four years, and (d) raise money, starting with urgent appeals to fund bogus legal challenges.

Trump is sending multiple emails per day to supporters, such as this on Nov. 10: “We cannot let the Left go unchecked any longer. There are too many irregularities and room for potential DECEPTION to give up now. We need to FIGHT BACK, but we can’t do it without your help.”

According to Axios and other news outlets, Trump is expected to hold campaign-style rallies in the coming weeks. If he does, his 2024 re-re-election bid will have begun.

In his acceptance speech in 2016, Trump said, “Ours was not a campaign but rather an incredible and great movement.” In a twisted way, that’s not unlike the approach Bernie Sanders took when he lost the nomination to Hillary Clinton. Sanders spent the next four years building a powerful grassroots movement among progressives who believed they had been cheated by Clinton’s forces. They were encouraged by talk shows like “The Young Turks,” and by the time campaigning began again in 2019 Sanders had what many believed to be the best shot at securing the nomination.

Trump just got over 71 million votes – a number that no amount of recounting will change – creating a powerful base for 2024. Many Trump voters are angry. Everything he’s doing now is designed to reinforce that anger so that it survives as a “movement.”

Even as he emailed that the race with Biden wasn’t over, Trump formed what’s known as a leadership political action committee. Such PACs can accept up to $5,000 per year from each donor. While the money can’t be used to directly fund a campaign in 2024, it will be available for travel and other expenses as Trump charts his course to retake the White House.

In 2024 Trump will turn the same age as Biden will be when he takes the oath of office: 78. Many have speculated that Biden will step down after one term at age 82, presumably making possible a run by Kamala Harris to replace him. I imagine that’s a fight Trump would relish.

That said, American politics are increasingly tough to predict. Four years is a long time. The nation faces so many problems right now that even thinking about scenarios four years out is folly.

But those watching Trump’s current post-election circus act should understand what’s up. The man isn’t trying to stay in office, he’s looking for a way to get back. As he said upon winning in 2016: “While the campaign is over, our work on this movement is now really just beginning.”

That’s how Sean Hannity, Laura Ingraham and others at their network will cast it. To them, Trump will always be crazy like a Fox.