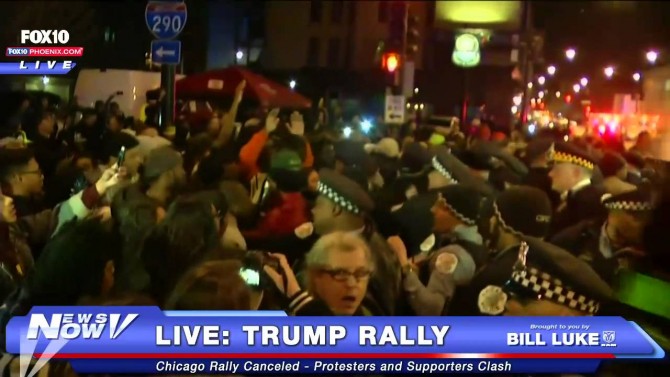 Businesman-showman and demagogue Donald Trump is being increasingly reviled for the polarizing and at times violent language he uses which has energized his followers, who at his rallies have come to resemble professional wrestling match audiences. Even when demonstrators, many of them self-proclaimed young Bernie Sanders supporters, sand bagged and disrupted a Trump event until it was canceled and raised valid issues about those on the left trampling on free speech rights, Trump gave yet another example of how he throws red meat to his followers and accentuates hatred.

Sanders is not a communist. He’s a socialist. Classic demonization, exaggeration and outright lying. And demagoguery.

Many Americans know that a socialist is not the same as a communist, but in “high concept” political advertising and name-calling demonization, the word “communist” triggers a fight or flight mechanism. And in Trump rallies we are now seeing lots of “fight” being triggered in a still small number of his followers.

Many fellow GOPers are piling on him now, except some who are solely interested in partisan power:

Trump rival, U.S. Senator Marco Rubio of Florida, cast wide blame for what he called “third world” images out of Chicago, from the protesters to the media, with his harshest criticism directed at Trump.

“This is a frightening, grotesque, and disturbing development in American politics,” he said, speaking to reporters before a rally in Pinellas County, Florida.

John Kasich, the Republican governor of Ohio who is also running for president, told journalists before a campaign event in Cincinnati on Saturday that Trump has created a “toxic environment.”

“And that toxic environment has allowed his supporters, and those who seek confrontation, to come together in violence,” he said. “There is no place for a national leader to pray on the fears of the people who live in our great country.”

In a statement, Republican candidate, U.S. Senator Ted Cruz of Texas, called the incident “sad” and said the protesters should have let the rally happen.

Rivals are saying Trump is responsible. For now.

The Washington Post has run an op-ed in which GOPers Newt Gingrich, Eric Cantor, Bill Kristol, Haley Barbour, Ari Fleischer, Jim Leach and Danielle Pletka answer the question, “How should the Republican Party respond to having Donald Trump as the front-runner?”

Here are a few quotes:

Gingrich:
“…it is time for the elites to accept that ordinary Republicans — their own voters — want an insurgent outsider.”

Kristol:
“How should Republicans respond…? With the determination to defeat him.” He says “even if Trump were to be the official nominee, there would be no reason not to mount an independent Republican candidacy in the general election.”

Cantor:
“We beat [Trump] by winning votes, and we win votes by highlighting his lack of conservative credentials and offering a better vision.”

My favorite is the analysis of Bush White House press secretary Fleischer:

And even if Trump were to be the official nominee, there would be no reason not to mount an independent Republican candidacy in the general election…Trump is not really a Republican. He is an independent who has leased the title of Republican so that he can temporarily affix it to the campaign he is building. He’s a wrecking ball, swinging through the Republican Party, destroying the GOP positions on entitlement reform, free trade and Planned Parenthood.

But if he’s the nominee, his wrecking ball will swing through the Democratic Party, too…Trump changes everything. He changes the math. He changes the ideology. He changes what’s considered acceptable behavior. The big question is: Can he change who wins the White House?”

I’ve long contended that those insisting Trump didn’t couldn’t be elected were underestimating him. Also: no matter how divided the GOP may appear right now, look for talk show hosts to quickly jump on board if he’s nominated then use their powerful platforms to make sure their audiences are on board, too. Then you’ll see key GOPers (as we see now with Ben Carson and Gingrich) jump on board. The party of Lincoln will then be officially dead — if it isn’t already. And the Trumpublican Party will be born.

Meanwhile, on the other side, the young demonstrators who shut down the Chicago rally are celebrating and suggesting more of the same. But, actually 1)they infringed on the free speech rights of Trump and his followers who should have an chance to meet and express their views, just as the demonstrators’ seemingly favorite candidate Democratic Vermont Sen. Bernie Sanders should have a chance to have a rally with his followers 2)have given ammunition to those on the right who are painting the demonstrators as trying to end free speech 3)you can easily predict what will happen next — there will be Trump supporters trying to interrupt Sanders and Hillary Clinton rallies.

Take your bets now on how long it’ll be before someone is seriously hurt — or killed.

It all boils down to how this started and, yes, it started with Trump’s polarizing speeches, not-fit-for-family words beneath the dignity of any other national candidates we’ve seen speaking in public in our history, and comments about demonstrations with language peppered with words supporting or endorsing violence. Add to that comments about deporting all illegal immigrations and banning Muslims from entering into the United States and we’re seeing a candidate who is the opposite of a healer, uniter or serious thinker. Then add to that the anxiety and anger of many voters on both sides and you have a combustible situation.

As he smilingly holds and drops the match.

IMPORTANT UPDATES:
—Vox offers a video of Trump which it notes shows Trump encouraging violence among his supporters — and a list of his violence-condoning comments that are unlike we have heard from anyone from a major political party running for President.
—Bernie Sanders has issued a strong statement rejecting Trump’s charge that his followers are responsible for violence at Trump’s rally:


–Vox’s Ezra Klein analyzes in detail with quotes Donald Trump’s ideology of violence.
–The Intercept notes that Trump has expressed concern that his rallies are not violent ENOUGH.