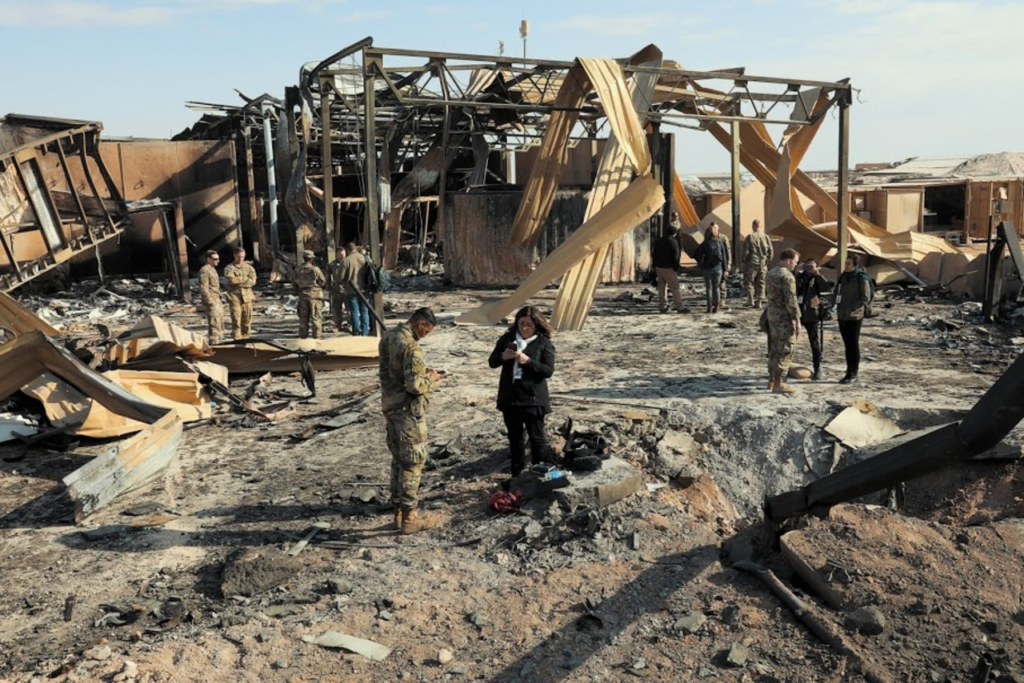 First, Trump claimed no U.S. troops were injured during the Iranian missile attack on the al Asad military base in Iraq, on January 8.

Then, after the Pentagon announced that several troops had indeed been diagnosed with traumatic brain injuries, Trump “classified” the injuries suffered by our troops as just “headaches and a couple of other things.”

The number of troops injured has kept climbing during recent weeks.

Today, there are reports that more than 100 US service members have been diagnosed with mild traumatic brain injuries in the wake of the January 8 Iranian missile attack.

One wonders when the commander in chief is gong to acknowledge the seriousness of the attack and of the injuries.

The Pentagon, taking the alleged “headaches” seriously, has just announced that 34 service members have now been diagnosed with traumatic brain injuries following the missile strikes by Iran on Ain al-Asad air base in Iraq on January 8.

Pentagon spokesman Jonathan Hoffman told reporters that eight service members who have been previously transported to Germany have now been moved to the United States for additional treatment.

The number of troops who suffered a concussion or more serious brain injuries during the Jan. 8 missile strike on Iraq’s Al Asad air base continues to increase — now “in the teens” – The Wall Street Journal reports.

At the same time, veterans and veterans groups are pointing out the seriousness of such injuries and voicing their disdain over Trump’s cavalier attitude towards the injured troops.

The Journal quotes Randy Reese, executive director of the million-member Disabled American Veterans: “…effects such as blurred vision or irritability can linger far longer, with complications that ripple into work performance and personal relationships…”

Reese also says, “It just appears the commander-in-chief is somewhat out of touch regarding the seriousness of this injury…”

Paul Rieckhoff, founder of Iraq and Afghanistan Veterans of America, calls Trump’s comments “really counterproductive because we’ve worked for the last decade-and-a-half to highlight and educate people about the invisible injuries of war…” He adds, “[Trump] really displayed remarkable ignorance about what could be the signature injury of our generation.”

With fast-evolving national and world events and with the nation’s attention riveted on the impeachment of Donald J. Trump, it seems like a very long time ago when Iran retaliated for the U.S. killing of Iranian Maj. Gen. Qasem Soleimani.

But in fact, the launch of 11 Iranian missiles against Ain al-Asad air base west of Baghdad, where approximately 1,000 U.S. troops are based, occurred only two weeks ago.

At the time, the Pentagon claimed that there were zero “casualties” and Trump touted that “No Americans were harmed in last night’s attack by the Iranian regime. We suffered no casualties. All of our soldiers are safe…”

As recently as January 13, Trump claimed he had been told no American had been harmed in the Iranian missile strike, according to The Military Times. The Times continues:

The question of American casualties was especially significant at the time because the missile attack’s results were seen as influencing a U.S. decision on whether to retaliate and risk a broader war with Iran.

But all was not well.

According to The Military Times, a few days after the attack, Jonathan Hoffman, chief Pentagon spokesman told reporters that the symptoms of traumatic brain injury, or TBI, often don’t materialize until days after an incident.

Yesterday, The Washington Post reported that additional U.S. service members have been flown out of Iraq “for closer evaluation of potential concussion injuries from the Iranian missile attack of Jan. 8.”

Today, the commander in chief who felt that alleged bone spurs in his heels were sufficient to keep him from serving his country in the military, minimized the injuries suffered by our troops during the Iranian missile attack.

“I heard that they [sic] headaches and a couple of other things, but I would say and I can report that it’s not very serious,” Trump told reporters at a press conference in Davos, Switzerland.

Mr. President, your impeachment may be a political “headache” to you, but please don’t downplay or politicize serious injuries suffered by our military while serving our nation.