Cannibalism is a surprisingly common phenomenon in the animal world. It has reportedly been recorded in more than 1,500 species.

Gory as it may seem to humans, to eat one’s own “can make evolutionary sense…Whether it’s a way to destroy competitors, nourish one’s young, or simply out of hunger, cannibalism can be a shrewd strategy for survival in the animal kingdom” writes Mary Bates, a freelance science writer at wired.com.

But how about eating one’s own in the “political kingdom”?

While not uncommon in either political party and whether called “eating one’s own,” political (self-)cannibalism or circular firing squads, it has existed in politics for eons.

But it has never been as prevalent and savage as today.

Soon after Trump’s November2020 landslide election defeat, when Trump started claiming that the election had been stolen, we already read at Blogology:

Republicans Are Eating Their Own Now.
One chilling measure of the madness that has engulfed the Republican Party is the way they are now turning on each other and eating their own.
::
Watching Republicans eat their own now, it really feels like America is through the looking glass. Anything, however crazy, can happen.

And “crazy” did happen. Following the January 6 insurrection and Trump’s second impeachment, there has been an alarming rise in the ferocity and vindictiveness by which Republicans’ devour their own.

Republicans who dared to speak the truth and their conscience about those events have, at best, been made pariahs within their own party, at worst they have been castigated, censured, expelled – even physically threatened.

Numerous Republicans – at all levels of government – have been punished and humiliated by Trump loyalists. Those dishing out such “cannibalism” range from national senators and state governors down to Trump’s merry men and women at city and town councils.

These brave women and men at the receiving end are “a lonely band of outliers within the Republican Party [who] straddle between standing on principle and staying in power as members of a party where conspiracy theories and lies reign is likely to get more difficult as the 2022 elections heat up,” according to Piece Business.

The most recent and visible example of Republican “eat-your-ownism” is the degrading treatment received by Utah’s Sen. Mitt Romney – once the Party’s nominee for president — and by Wyoming Rep. Liz Cheney, the third-ranking Republican within the House, at the hands of Trump’s henchmen.

On Monday, CNN’s Brianna Keilar “rolled the tape” on high-ranking Republicans who have been censured by fellow Republicans for refusing to buy into Trump’s BIG LIE and for voting to convict Trump during his impeachment trial. In effect, for speaking the truth and for standing by their convictions. 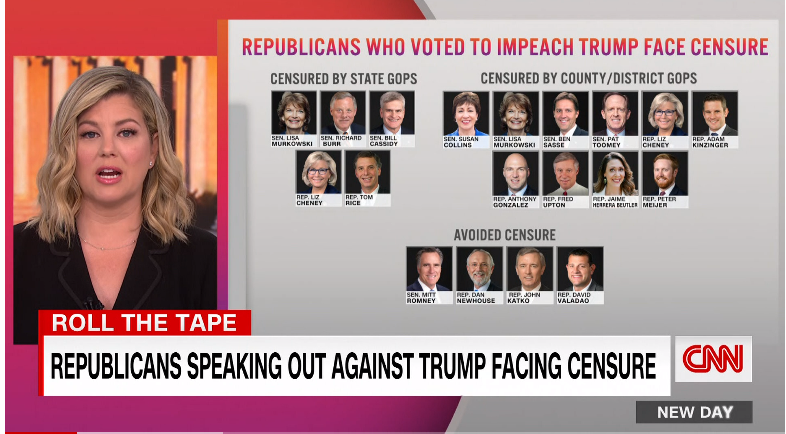 In the CNN screen capture above:

Numerous party state and local officials who refuse to accept the Big Lie or to drink Trump’s Kool-Aid are also being censured, forced to step down, threatened — eaten by their own at local banquets.

Typical of such Kool-Aid drinkers at the local levels is Pressley Stutts, a local Tea Party leader in South Carolina who claims Trump’s instructions to the faithful are clear: “Go purge, get rid of the RINOs in the Republican Party.”

I hope the reader understands that this writer is using “cannibalism” figuratively when discussing the banquet Republicans are feasting on.

The question is, were Republicans speaking figuratively when — 12 years ago during the healthcare debate — they were accusing Democrats of wanting to “pull the plug on Grandma,” of “wanting to kill your Grandma”?

We’ll never know, but this Democrat hopes Republicans will properly use the “lowly comma” when texting “Let’s eat Grandma.”