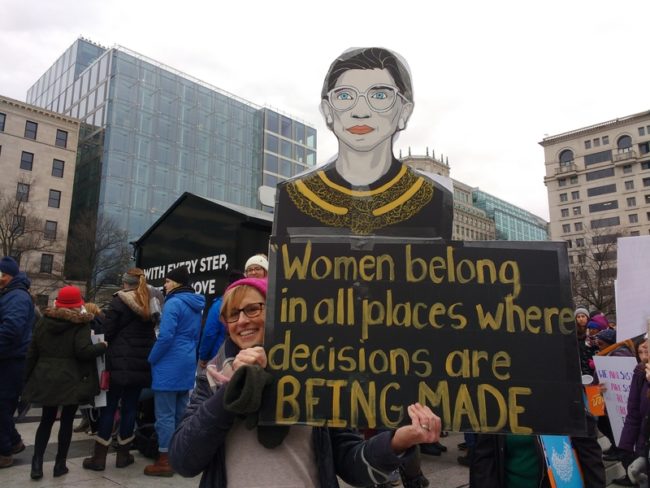 NPR has announced that Supreme Court Justice Ruth Bader Ginsburg has died at 87. The death of the longtime champion of gender equality is likely to give a new twist to an already tempestuous presidential election.

Justice Ruth Bader Ginsburg, the demure firebrand who in her 80s became a legal, cultural, and feminist icon has died. The Supreme Court announced her death, saying the cause was complications from cancer.

Architect of the legal fight for women’s rights in the 1970s, Ginsburg subsequently served 27 years on the nation’s highest court, becoming its most prominent member. Her death will inevitably set in motion what promises to be a nasty and tumultuous political battle over who will succeed her, and it thrusts the Supreme Court vacancy into the spotlight of the presidential campaign.

Just days before her death, as her strength waned, Ginsburg dictated this statement to her granddaughter Clara Spera: “My most fervent wish is that i I will not be replaced until a new president is installed.”

She knew what was to come. Ginsburg’s death will have profound consequences for the court and the country. Inside the court, not only is the leader of the liberal wing gone, but with the Court about to open a new term, Chief Justice John Roberts no longer holds the controlling vote in closely contested cases.

Though he has a consistently conservative record in most cases, he has split from fellow conservatives in a few important ones, this year casting his vote with liberals, for instance, to at least temporarily protect the so-called Dreamers from deportation by the Trump administration, to uphold a major abortion precedent, and to uphold bans on large church gatherings during the coronavirus pandemic. But with Ginsburg gone, there is no clear court majority for those outcomes.

Indeed, a week after the upcoming presidential election, the court is for the third time scheduled to hear a challenge brought by Republicans to the Affordable Care Act, known as Obamacare. In 2012 the high court upheld the law by a 5-to-4 vote, with Chief Justice Roberts casting the deciding vote and writing the opinion for the majority. But this time the outcome may well be different.

That’s because Ginsburg’s death gives Republicans the chance to tighten their grip on the court with another Trump appointment that would give conservatives a 6-to-3 majority. And that would mean that even a defection on the right would leave conservatives with enough votes to prevail in the Obamacare case and many others.

NPR also notes that putting in a new justice before the election would create a second controversy after what Sen. Majority Leader Mitch McConnell argued in blocking Barack Obama’s appointee before the 2016 Presidential election:

Back then, McConnell’s justification was the upcoming presidential election, which he said would allow voters a chance to weigh in on what kind of justice they wanted. But now, with the tables turned, McConnell has made clear he will not follow the same course. Instead he will try immediately push through a Trump nominee so as to ensure a conservative justice to fill Ginsburg’s liberal shoes, even if President Trump were to lose his re-election bid. Asked what he would do in circumstances like these, McConnell said: “Oh, we’d fill it.”