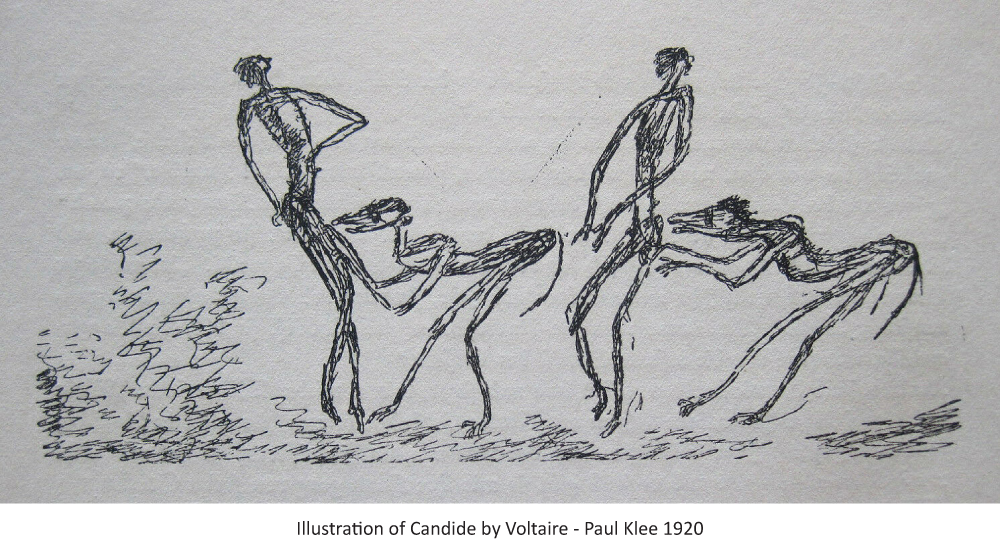 “All is for the best in the best of all possible worlds”. Professor Pangloss in Candide – Voltaire

Donald Trump and his regime have been scrutinized from every possible angle imaginable – as the apotheosis of Reaganism, to the hopes that Trump will become more presidential. We are routinely treated to the smirky Bill Kristol and a befuddled George Will earnestly clutching their pearls in disbelief at the anarchy their ideas have unleashed. But due to Trump’s habit of throwing stinkpots onto our national deck, we are struggling to define a strategy to defeat him using the powers granted by the Constitution. We have impeached him, but will a Republican Senate refuse to convict, giving Trump an electoral home run? Will choosing to draw this fight out until the 2020 election succeed in defaming Trump sufficiently to dampen Republican turnout? Will simply doing the right thing by impeaching this traitor now be its own reward, or will it be remembered in history as the moment when we decided to fire in the name of outrage – before we saw the whites of their eyes? Republicans, to their great disgrace, lack the moral courage to stop Trump’s offensive, and co-conspirators like Mitch McConnell are playing their parts as collaborators with a degree of smarmy evil worthy of history’s greatest villains.

I’m convinced that Donald Trump is a traitor to America. His foreign policies shine as brightly as the torches of the Unite the Right fascists of Charlottesville. His lifting of sanctions on Russia can only be motivated by political self-interest – and it would be a “yes, we can” moment, indeed, to discover all of the LLCs that contain the fruits of Trump’s bribery.

Our denial of these realities makes us so open-minded that our brains have actually fallen out of our skulls.

We have had the luxury of maintaining an elaborate patchwork of what is called our national Weltanschauung – the unchallenged ideas and beliefs through which we observe and interpret the world, beliefs that, increasingly, inform our political decisions. We are facing a genuine clash of civilizations across and within America. And these camps are impervious to factual data because they have been incubated in philosophical bubbles without any disputation. Too many Americans belong to cults of various kinds. Too many are indifferent to the actual nature of reality, or worse, believe that they possess a special back channel to the universe that permits them to exercise whatever “rights” they personally deem unalienable.

A thorough reading of the list of Republican politics, from the Greed is Good Reagan era to today’s garbled conspiracy theories on Fox News, demonstrates that our political discourse has become a walk through a house of mirrors. If you squint, you’ll see that Trump’s anti-immigrant rhetoric comes directly from the dead eyes of Steven Miller. You’ll get to meet the folks who promote isolationism and the virulence of anti-establishment rhetoric through the crapulence of Steve Bannon and his band of brothers at Breitbart. Trump’s abandonment of historic foreign alliances has been placed into overdrive with the ideological help of the convicted Michael Flynn and the mustache himself, John Bolton. And you’ll meet the Right-Wing Populists who use bombastic oratory to convince their already primed, faith-based believers to vote against their own self-interests.

We have a quisling in the Presidency and collaborators in the Republican Party. We have a sociopath in the highest office of the land. As Donald Trump’s narrative unfolds in the next year, it will likely be demonstrated that he has, indeed, committed bribery and has given aid and comfort to our enemy in exchange for money and favors. As investigations into campaign finance violations proceed, it is likely that many Republicans in the House, Senate, and among state legislatures, have received funding from foreign entities, particularly Russia, via organizations such as the NRA and super PACs.

“He has refused his Assent to Laws, the most wholesome and necessary for the public good.” [Trump’s Obstruction of Congress by refusing to permit aides under subpoena to testify or to provide subpoenaed documents]

“He has forbidden his Governors to pass Laws of immediate and pressing importance, unless suspended in their operation till his Assent should be obtained; and when so suspended, he has utterly neglected to attend to them.” [The Trump/McConnell refusal by the Senate to pass “ H.R.1, the “For The People Act of 2019”, intended to prevent foreign interference in our elections.]

“He has refused to pass other Laws for the accommodation of large districts of people, unless those people would relinquish the right of Representation in the Legislature, a right inestimable to them and formidable to tyrants only.” [The Trump/Republican Party’s voter suppression legislation in Georgia, Indiana, Kansas, Mississippi, North Carolina, Tennessee, Virginia, and Wisconsin.]

“He has endeavoured to prevent the population of these States; for that purpose, obstructing the Laws for Naturalization of Foreigners; refusing to pass others to encourage their migrations hither, and raising the conditions of new Appropriations of Lands.” [Trump’s vaunted Wall, his Muslim Ban, and his sadistic caging of children at our border with Mexico.]

“He has obstructed the Administration of Justice by refusing his Assent to Laws for establishing Judiciary Powers.” [Trump has established a new tradition in America of nominating candidates to our courts that are deemed “unqualified” by the American Bar Association, and the Republican Senate has approved each one.]

Voltaire’s, Candide, is a coming of age story – a Bildungsroman – where Candide, through his adventures, discovers the corrupt society of men, a society that is the opposite of the optimistic worldview of his teacher, Professor Pangloss. We must grow up so that we can understand that the catastrophe we are currently facing with Donald Trump and his party of quislings is an existential disaster for America because America is no longer the best of all possible worlds.

Democratic candidates have to stop debating the minutiae of healthcare and start defending our democracy with full-throated condemnation of Donald Trump and the Republican Party. They must gather the political and moral courage to bring the fight to the Republicans who coddle this tyrant while gorging on the scraps of our democracy. Democrats must throw the first punch now because the Constitution they love has been set on fire by a president who is a traitor. And each Democratic candidate must denounce by name every Republican who stands in our legislative bodies holding a burnt match.

image: Wikimedia
Deborah Long is a Principal at Development Management Group, Inc. and founder of several non-profit charitable organizations.  If you find her perspectives interesting, provocative, or controversial, follow her at:  https://www.facebook.com/debby.long.98499?ref=br_rs