Posted on May 3, 2021
You are here: Home / Arts & Entertainment / Cartoons / PUMPKIN RAGE (CARTOON, COLUMN AND VIDEO) 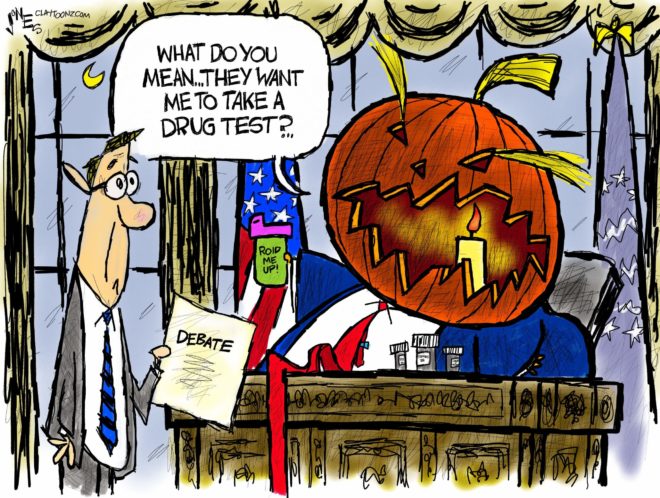 When Donald Trump called for Joe Biden to take a drug test before their first debate, he was probably high as a kite when he said it.

Since Donald Trump contracted the Trump Virus, he’s been a bit off the rails with many believing he’s doped up on steroids. The thing with Trump being on drugs is, how can you tell?

It’s not as easy as being able to detect when he’s lying because if he’s talking, then he’s lying. If we’re to believe Donald Trump is ‘roided up by his really weird and insane statements, then he’s probably been doped up for the past two decades.

What was he on when he talked about windmill cancer or raking forests? How much Adderall does one have to be on to talk about nuking hurricanes? Did he raid Donald Trump Jr’s stash when he dry-humped an American flag?

One way to detect a sin Donald Trump is guilty of is when he makes the accusation about someone else. When he said Hillary Clinton was “Putin’s puppet,” he was repeating her accusation against him and has proven repeatedly that Vladimir Putin is pulling his strings. When he says China is helping the Biden campaign, that means Russia is helping his. When he screams about Democrats being guilty of sexual assault…yeah. The only thing preventing him from being guilty of using a private email while president (sic) is the fact he’s illiterate. Though it should be noted, several in his administration, like Nepotism Barbie, are guilty of using private email and even stating (after Donald Trump spent years screaming about Hillary’s emails) that they didn’t know it was a violation. Who knew?

So, when Donald Trump accuses Joe Biden of being on drugs, it probably explains his constant sniffing problem.

Even before Donald Trump acquired the Trump Virus, I’m sure both candidates’ pee would contain traces of chemicals. C’mon. They’re both in their 70s. It’s not just a high-fiber diet that’s keeping them going. And in Trump’s case, it’s probably a side of Metamucil next to a Big Mac.

I once read that aides to Adolf Hitler, who was a vegetarian, would sneak bone marrow into his food for nutrition. In Donald Trump’s case, aides are probably sneaking broccoli into his KFC buckets.

But what has Donald Trump said since his positive covid diagnosis that’s crazier than usual? He said it’s a “gift from God.” He said he’s probably immune. He said he feels better than he did 20 years ago. He thinks the experimental drugs are a cure. He told people not to be afraid of covid or to let it “dominate their lives.” He’s continued to fabricate claims of voter fraud. He’s flipped and gone back and forth over a stimulus deal. None of these examples proves he’s heavily medicated and none is more absurd than his usual absurdities.

According to reports, the list of drugs Donald Trump has been on are steroids, Monoclonal (Regeneron), Remdesivir, zinc, vitamin D, famotidine, melatonin and aspirin. At this stage, Donald Trump’s going to start following the Grateful Dead. I don’t think Michael Jackson’s and Elvis’ doctors together prescribed this much medication to their clients, though in Donald Trump’s case, his drugs were prescribed by Vince McMahon. Somewhere, Keith Richards is saying, “Garbdly complunkyity on ye’, mate.” Nobody understands what Keith Richards is saying. Donald Trump’s former doctor, Harold Bornstein, said “That’s why Trump’s the healthiest president in the history of presidents.” The former White House and current Texas Republican congressional candidate, Dr. Ronny, said, “But Obama.”

Oddly enough, the list of medication Trump has received does not include Hydroxychloroquine or bleach.

Also, these are the drugs we’re aware of. Keep in mind, this is a White House and team of doctors who have lied about Donald Trump’s health in the past. They’ve literally lied about his weight. They’ve even lied about his height as if we can’t see. They’re refusing to tell us when he last tested negative before he contracted the virus. Now, they’re refusing to tell us when he was last tested or even if he’s been tested since he got the Trump Virus. These people are constantly engaged in a coverup. And keep in mind, this White House includes people who demanded that Hillary Clinton take a brain scan and for it to be released publicly. The greatest risk of Donald Trump taking a brain scan is that they won’t find one.

And, people on social media are trying to figure out what’s going on with his face. One side is lumpy while the other is saggy.

Whether Donald Trump is on drugs or not, there is something wrong with his brain and it’s just one of the many reasons he should not continue being president.