Posted on September 5, 2022
You are here: Home / Arts & Entertainment / Cartoons / NOTHING BUT THE NO-TRUTH (Cartoon and Column) 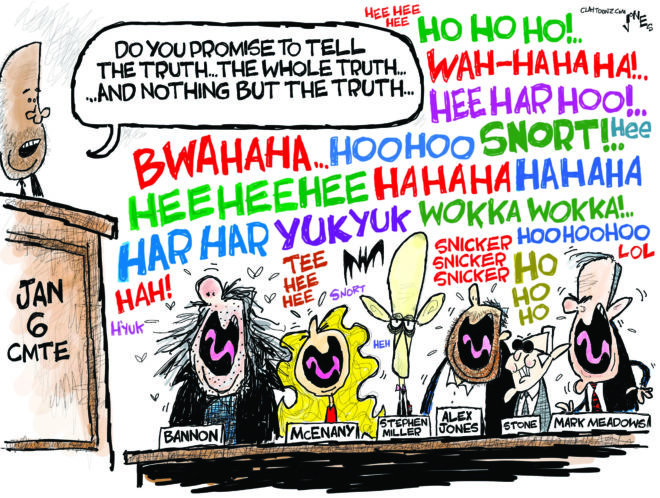 You can’t expect a Trump cultist to straight up tell the truth, but you can get the truth out of them if you understand Trump talk. It’s pretty simple actually. If a Trumper says someone did something, that means they did it. If they say there’s election fraud, it’s their election fraud. “Election integrity” means making it harder for minorities to vote. If they say they have a “black friend,” that means they’re racist. When they say they’re “constitutionalists,” that means “let’s destroy the Constitution.” When one of them says he’s the “best negotiator” ever, it means he’d trade all of our nuclear secrets to Vladimir Putin for a Happy Meal. “Grab them by the pussy” means grab them by the pussy.

So, what does the January 6 Committee hope to gain from sending subpoenas a bunch of gaslighting liars? The first thing they might get is having all these jackholes sent to prison. Steve Bannon, who was not a member of the Trump administration at the time of the white nationalist insurrection, or a lawyer, claimed executive privilege. He’s not even an executive. All he can claim is white privilege (dammit. Another cartoonist is going to read this blog and steal that). Now, he’s facing some serious jail time.

Mark Meadows was Trump’s chief-of-staff at the time and he has a better argument than Bannon does for executive privilege…and even then, his argument sucks. Here’s the thing, kids (and it’s going to come as a shock to some of you), Donald Trump is NOT president.

No, Donald Trump is not president because he lost the election to the man who is now president, Joe Biden. President Joe Biden beat Donald Trump by over seven million votes. He beat Trump’s ass like he owned it though not literally. Nobody wants to own that ass. But anyway, if you’re NOT president, you can’t cite executive privilege. Even then you can’t claim executive privilege for anything you want. It’s not a rich baby’s candy store.

So, Mark Meadows will not get away without testifying. Meadows was a big part of the Big Lie. He even tried to get the Justice Department to investigate voting machines being tampered with by Italian Satellites. I think the Justice Department officials who read Meadow’s memo should be forced to testify too…so they can tell us how hard they laughed.

Kayleigh McEnany has been a Trump goon since she bailed from being a Cruz goon. On her first day as White House spokesgoon, she lied by saying she’d never lie. McEnany now works for Fox News and has a new book out. I’m sure she’ll use both platforms for only telling the truth. McEnany was still serving as Trump’s spokesgoon at the time of the insurrection while also working as a campaign adviser which is illegal. You can’t work for a campaign and the government at the same time. But then again, using government property for a political convention is supposed to be illegal too.

McEnany spread lies about election fraud from the podium in the White House press room. She was present while Trump was giddily watching the white nationalist attack on the Capital building.

Trump Campaign goon Jason Miller was subpoenaed. He was a player in spreading election fraud lies and trying to convince legislators to overturn the election in their states. Miller was a contributor to CNN but left in 2018 after being accused of drugging his mistress.

Stephen Miller was director of Trump’s racism department and another spreader of election fraud lies. He may have been subpoenaed just to see if he appears with spray-on hair.

Alex Jones and Roger Stone were also recipients of the January 6 Committee’s subpoenas. Both of these guys are notable liars. Stone is a self-described “dirty trickster” who has a Richard Nixon tattoo on his back. Alex Jones is a right-wing liar and conspiracy theorist who uses his website, InfoWars, and his podcasts to spread them. Last week, a Connecticut court ruled he was liable for spreading defamation about the Sandy Hook school shooting. These guys are the crap that crap craps. You will have to learn how to read right-wing tea leaves to get anything out of them. Both men were a huge part of planning and promoting the insurrection.

If all these goons testify, it will be impossible for each of them NOT to perjure themselves. I’m looking forward to it by stocking up on popcorn.

These goons shouldn’t just go to prison if they defy these subpoenas. No, they should also be charged for their parts in an insurrection against the U.S. government.

And when all this crap goes to prison, I hope they take an orange turd with them.