You are here: Home / Bigotry / MAGA FUNNY (Cartoon and Column) 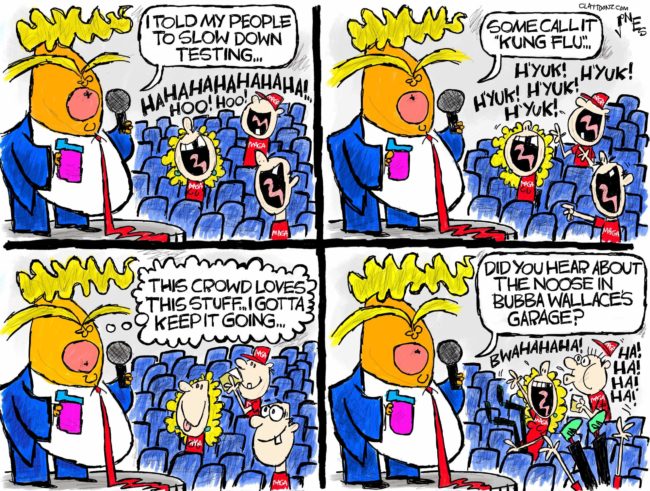 I used to think conservatives were funny. Now, they’re only funny inadvertently. The basis for all Republican humor, especially for those in the Trump cult, is cruelty.

Republicans think it’s hilarious to put immigrant children in cages. They laughed their asses off when Border Patrol agents destroy jugs of water left for immigrants in the desert. They love cracks at the appearance of an elderly woman if that woman is a Democrat. When Donald Trump calls a woman “nasty,” entire arenas roar. Those arenas aren’t as full as they were, but still. “Send them back” still slays ’em.

MAGAts love cruel humor because they’re cruel people themselves. There are two qualifications to be a Trump supporter: You have to be OK with racism and you have to be an asshole. That comes pretty easy for Trump supporters because it’s the cruelty and racism that appeals to them. Try this test: Ask any one of them to explain details of any Trump position. Nine times out of ten, the answer will contain the word “Obama.”

During Donald Trump’s Tulsa hate rally that was a huge flop, he said he told his people to slow down testing for the coronavirus. The audience ate it up and laughed their balls off…even the female Trump supporters (though to be fair, I hear most of them shave their balls). Later, his campaign fucknuts said he was just joking.

Now, Donald Trump says he wasn’t joking. The joke here that’s hilarious is this White House can’t even get on the same page over something stupid like, more testing leads to more cases. See? Inadvertently funny.

Also during his racist rally, Donald Trump said the coronavirus has more names than any other disease and he could name 19 of them. He only named one and it was “Kung flu.” That is a racist term and surely his crowd would strongly disapprove such a racist slur…who am I kidding? They loved it.

Later, KayLeigh McEnany, the new and improved White House spokesgoon, decided to blame the media for Donald Trump’s slur. Her argument was, we need to focus on where the virus came from and not Trump’s use of a racist slur. Months ago, Another White House goon, Kellyanne Conway got angry at a reporter for stating a source in the administration had used the same slur. Kellyanne demanded to know who said it. She was indignant with anger. The outrage. It’s impossible. Now we know who said it. I for one hope Kellyanne takes her anger over the slur out on the president (sic).

Yesterday, a noose was found hanging in the garage for Bubba Wallace, NASCAR’s only black driver. It was in his team’s garage at the race in Talladega, Alabama. Now, Donald Trump hasn’t said or tweeted anything about that, but he did retweet some racist videos last night. And, I saw some MAGAts speculating this was another Jussie Smollett situation that’s fake and generated by liberals because it’s preposterous to believe someone would hang a noose in a black guy’s garage in Alabama. I’m sure they won’t apologize after the offender is found and captured. He will be found. And, he will be a Trump supporter.

Do you know why all good comedians are liberal? Because you have to be smart to be funny…or at least good at it. Idiots don’t make good comedians…or political cartoonists. Over the past two weeks, there were three issues over racist political cartoons with newspapers apologizing and editors resigning. None of those cartoons were funny unless you love racist humor. Conservatives don’t understand humor, irony, hypocrisy, or anything more complex than, “ramp slippery, me fall down.” But as I said, Republicans are inadvertently funny. Let’s list some examples.

I’ll list a few better examples. When Donald Trump holds a glass with two hands and he purses his lips like he has super sucking power that’ll bring that water to his mouth without touching the glass, that’s hilarious. When he took forever to walk down that ramp…that was just stupid funny. The other walk he took, after his Tulsa rally, where his tie is undone and his orange makeup is splotched all over his color, Fufreakinghilarious.

Oh, yeah, remember that time they boasted about having a million people registering for tickets to a hate rally in Tulsa and only 6,200 showed up? BWAHAHAHAHAHAHAHAHA!!!!!

Remember them tearing down the stage for the overflow crowd because there wasn’t an overflow crowd? BWAHAHAHAHAHAHAHA!!!! Funny, funny, funny. Tim Allen should be writing this shit down. He can do those man grunts with it if that helps sell the joke.

What could Dennis Miller do with an empty Trump hate rally? Let me try: That rally was emptier than a theater showing cats if all the cats were racist cats wearing MAGA hats. OK, I can’t do a Dennis Miller, or I need more time and I want to publish this blog.

Another example of Republicans being inadvertently funny: Donald Trump probably wears a diaper. Alright, maybe some of our humor is cruel too. But, BWAHAHAHAHAHAHAHA!!!!!

But it’s OK if your humor is cruel when you’re making fun of racist assholes.