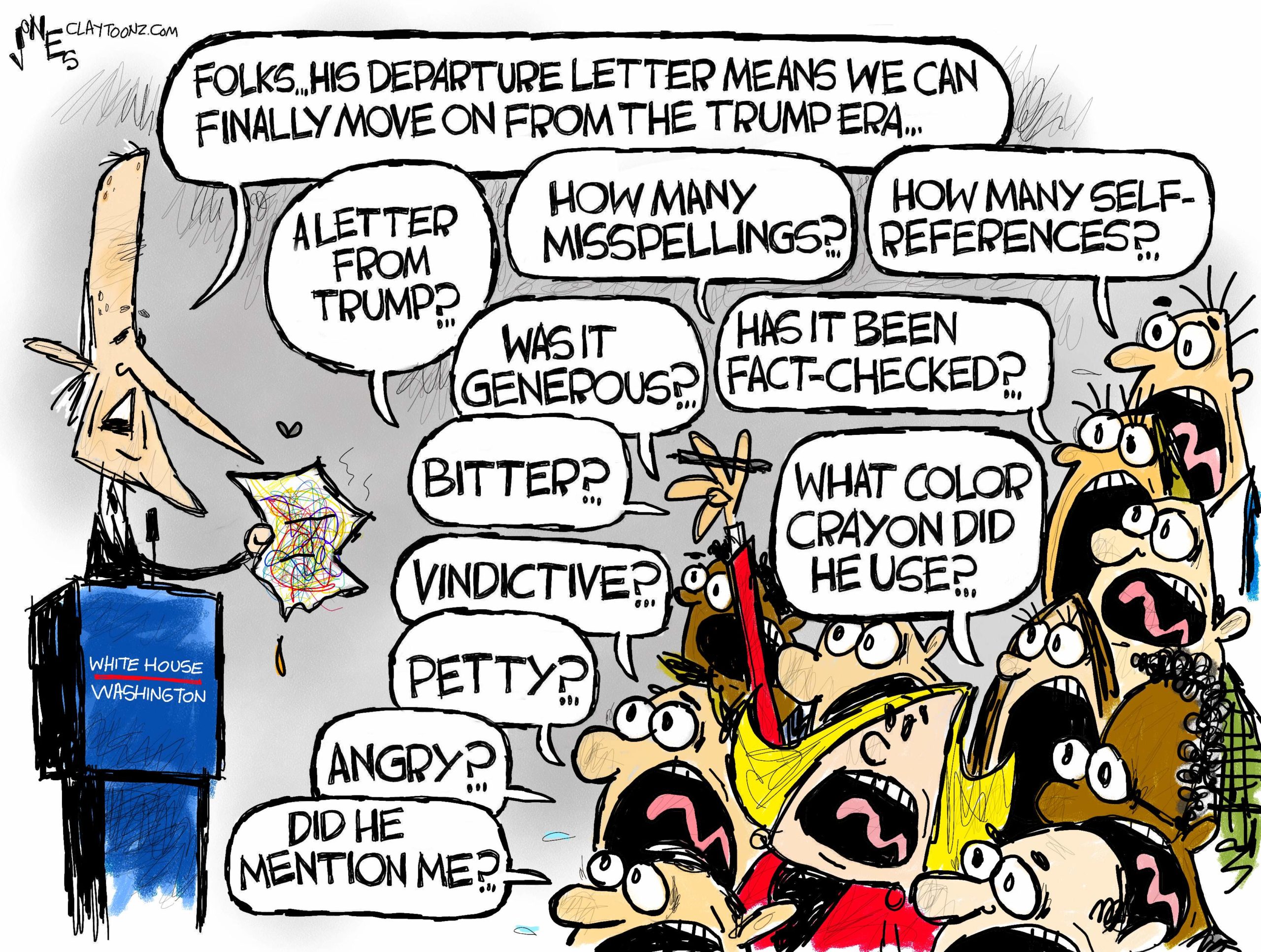 I tweeted out part of this joke yesterday and after several readers said it should be a cartoon, I said, “No.” I don’t like turning my tweets into cartoons. But then, I thought of doing it this way and changed my mind. So sue me. Now my only concern is that another cartoonist will steal my tweet and turn it into his own cartoon. Yes, that’s happened before and a colleague actually confessed to me once that he did exactly that.

There was a big mystery over whether Donald Trump would leave a letter in the Resolute Desk for his predecessor, President Joe Biden. It’s a tradition for the outgoing president to leave a letter for the incoming president. Usually, these letters are always positive, wishing luck and professing faith in the abilities of the new president.

And, it was very fair to question if Donald Trump would continue this tradition since he broke so many other traditions, like attending the inauguration of the new president instead of acting like a spoiled baby and taking Air Force One for one last joy ride. Or the tradition of accepting you lost an election like an adult and not spreading lies for months and months that you actually won in a landslide. Or the tradition of inviting the president-elect and the next First Lady to the White House for a tour. Or the tradition of a peaceful transfer of power instead of sending an angry mob of white nationalistic terrorists to attack the capitol, leave pipe bombs, kill cops, break sh–, steal stuff, poop in the hallways, and install you as a fascist dictator in a bloody coup attempt.

So you can’t blame the White House press corps for being intrigued when President Joe Biden told them that Donald Trump did indeed leave him a letter. Naturally, we all wanna know…what did he say?

This is the best letter ever. It’s even better than those Kim Jong Un love letters.

I won the election but enjoy the stolen White House, Mr. Faker. Don’t undo all the major wins and most successful-type stuff I did as ruler, er…precedent. And since I had my second term stolen from me, it’s a good thing I accomplished more in fore than any other precedent except for Abe Lincoln, who was also a Republican. Bet you didn’t know that.

Also, see if your nuke codes work. Mine never did. And if Putin calls, give him my new Mar-a-Lago phone number, 561-832-2600. He’s going to want to call me since he missed all my calls after the rigged election.

There’s a half-eaten Big Mac in the fridge. It’s yours if you want it or you can give it to Kamala. Hope you have better luck training her than I did with Pence, that traitor. Let me know if you learn what’s in the secret sauce. I’ve been trying to figure that out. There’s also a stuck DVD in the player. If you get the movie to work, spoiler! Bruce Willis is a ghost! Bet you didn’t see that coming!

Good luck, Sleepy Joe, with the shithole country caravans trying to climb over my awesome wall that Mexico will eventually pay for. See you in 2024.

P.S. If you find Barron somewhere in the White House, he likes cereal. They say you have to feed those things three times a day.