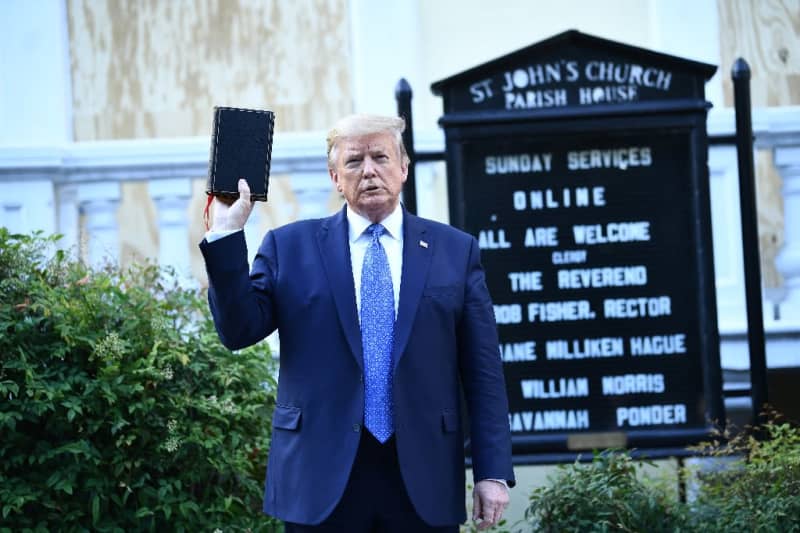 UPDATE: (Sadly, this is not satire)

I have tried my hand at it a few times, but most of the time it has been a disaster, with friends, even family, “disowning” me.

The last time I tried it in “The Washington Post Finally Comes Clean on the Obamagate Crimes – Almost,” even my most loyal fan, my dear wife, threatened to leave me (Ok, I am exaggerating a little bit).

Good political satire takes talent, so this time I am leaving it up to those who do (have it). In this case, to Tim Miller, a contributor to The Bulwark, a great American conservative news and opinion website – (NO satire here!) – as he writes in “Thank You Mister Trump! Our Great President is crushing it.”

But before sharing some of Miller’s thoughts, here is a bit of breaking news:

At a Pentagon press conference this morning, Defense Secretary Mark Esper revealed that Trump’s biblical photo-op trip to St. John’s Church on Monday, was in fact a carefully planned military diversionary tactic designed to mislead the enemy demonstrators in the Lafayette Park battlespace as to the real purpose of the mission: To survey the battle damage to the strategically important latrine (“bathroom” for civilians) in Lafayette Park. [Oh well, old satire habits are hard to break.]

Now to Miller’s report on what he feels may “go down in history as one of the greatest—if not the greatest—demonstration of leadership the world has ever seen.”

First, Miller laments the lack of pats on the back and pro-Trump “attaboys” from conservative media even for “Trump’s courageous decision to gas clergy members so he could hold a Bible in the air like it was a gross diaper he didn’t want to smell…”

“After all, the president is delivering on everything that he promised!!!” Miller says:

He’s instigating the kind of crackdown against minorities not seen in years. He’s making the media and all those Never Trump losers simultaneously sad and angry. We are witnessing the world’s greatest troll at the top of his game.

As the nation slowly unraveled over the death of George Floyd, the president quit caring about the Invisible Enemy and dedicated himself to taking on the real Enemies of the People: The media. And the Democrats.

Miller mentions that, “after 8 years of Mom Jeans Obama, we finally have a president with the courage to say the three words: Radical Antifa Thugs!…[and to drop] the Twitter a-bomb. “LOOTING LEADS TO SHOOTING” he rhymed, invoking the segregationist George Wallace and a racist Miami police chief.”

And so, after getting great counsel from his red-state evangelical whisperers slash former Met Gala attendees Hope, Ivanka, and Jared, Trump hatched His plan. Like a golden calf atop Mt. Sinai, President Trump would signal his deep, abiding faith with a Gold Lamé made-for-TV image of his own.

But in order to do it, he would need to emerge like Lazarus from his panic room and walk to St. John’s church, the site of the disgraceful looting and violence that he had power-tweeted through the night before.

Between him and the church were hippies. And the media.

[We now know all too well how he solved that problem, as the “breaking news” above describes]

“And then like any other red-blooded Christian-American, Mr. Trump found a Bible, put it in his daughter’s Birkin bag, and walked to the church in the greatest parting of the waters since Moses.”

The riots, the gaslighting, the tweets, the divisiveness, the blaming, the bravado, the tough talk, the lib owning, the trolling, the nakedly cynical patriotism and religiosity.

This is it. This is the good sh*t.