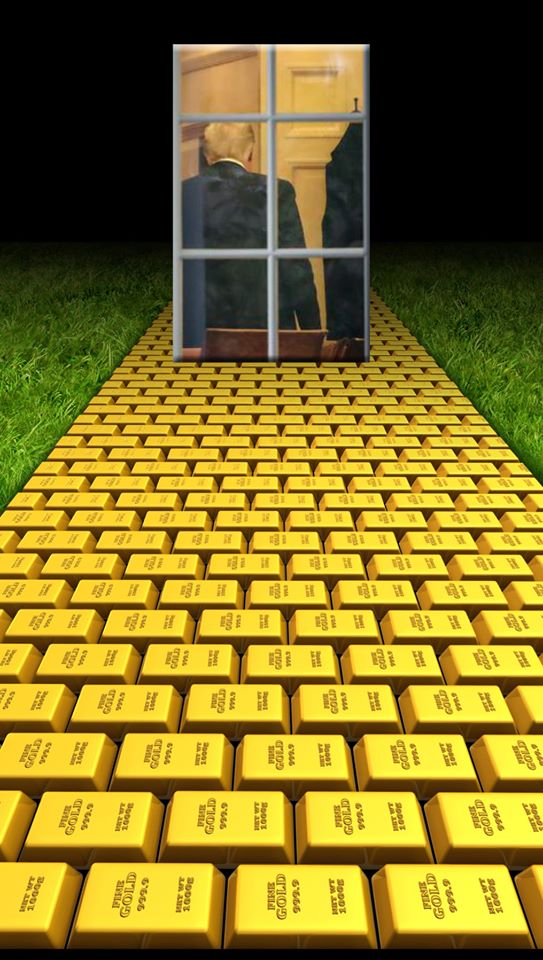 Everyone has their own narrative of what has taken place in the last three years of the Trump Presidency. It’s a dark web of multiple conspiracies intended to effectuate a soft coup on American democracy and establish a Republican plutocracy. It’s a moment in time when America finally has its manly Caesar who will fearlessly expand our glorious empire across the globe.

There is: The Steele Dossier; the Deep State; the “deconstruction of the administrative state”; the sullying of Caucasian purity by brown skinned invaders; NATO deadbeats; creeping socialism; Putin as a Great Leader; Kim who writes beautiful letters; King Salman of “so many people to kill, so little time”; and the American classic – fighting for Christendom. Some of the best narratives were probably cooked up in St. Petersburg, although, personally, I do believe that Pizzagate was a bridge too far. My pattern-seeking mind tends toward the part of The Steele Dossier (Memo 134, dated Oct. 18, 2016) that says Trump’s motive for removing sanctions against Russia was the quid for Putin’s quo: a 19% interest in Rosneft. That one has the ring of truth that drowns out the thunderous peal of the Liberty Bell itself.

But we really need to point a gimlet eye on what’s been standing in front of us for almost three years; we need to follow the Yellow Brick Road and ignore the trees that obscure the path.

If we do, we’ll undoubtedly discover Oz the Great and Powerful, whose real name is: Oscar Zoroaster Phadrig Isaac Norman Henkle Emmannuel Ambroise Diggs. To shorten his name, OZ used only his initials (O.Z.P.I.N.H.E.A.D.), but since that spells out the word Pinhead, he shortened his name further and called himself “Oz” – for his first two names, Oscar and Zoroaster. Oz was the son of a mediocre politician from Omaha, Nebraska and became a circus magician and conman replete with a promotional hot air balloon that somehow managed to float into the magical Land of Oz. There, he found himself worshiped as a great sorcerer and became Supreme Ruler of the kingdom. Thereafter, he worked hard to buoy up the myth.

Everyone gets the allegory, but few recognize how overarching it really is. Trump isn’t a business legend, he isn’t a politician, he isn’t really even a very good conman. He has only one modis operandi, and it has caused him to declare bankruptcy six times. Six times.

So, here’s the con: Trump buys a property with nothing down – with no skin in the game – by getting investors to put up the equity and banks to provide a mortgage for up to 100% of the asking price. He uses his company to take ownership and then eventually runs the thing into the ground while retaining a piece off the top. Because the size of the loan is so enormous, he becomes too big to fail for the banks, because the lenders would incur enormous losses if they foreclose on the loan. He negotiates with the lenders to retain some equity in the property, and they keep lending on it. The legitimate lenders who initially had to eat the losses early in his career refuse to lend him any more money. Only one bank stays in the game: Deutsche Bank. DB is known as the go-to bank for international money laundering, particularly for the Russian Mob. (For more on this, ask Wilbur Ross.) Trump’s deals are usually bad bets in the first place: Doral, golf courses in general, and towers in former Soviet states. Ultimately, Trump’s business plan became primarily a money laundering operation, and he shifted from building product to licensing his name. He learned this technique in the 80s from con men like Ivan Boesky and Michael Milken.

That’s all there is to it, folks. But what’s really interesting is how Trump was able to take over the Republican Party using the same technique. When he saw the power of the Tea Party and later, the Freedom Caucus, he pirated this 33% of the GOP and assumed its leadership. Then he decimated any opposition by threatening to destroy the Republican chances in 2016 by running as a third-party candidate and taking his 33% with him. Thus, he became too big to fail, and the party leadership had to nominate him or become a powerless rump party. He leveraged the GOP – they literally lent him the money to buy the Republican Party, its apparatus, and its voters. Some comforted themselves by believing that he could be controlled; some tried to fight him from within to preserve their own reputations as Never Trumpers; and some just thought that Trump was too stupid to do much harm, as long as Mitch McConnell could hold the caucus together and obstruct any Democratic opposition in the Senate.

But, of course, they were dead wrong. Trump did what he always does: he became too big to fail as he sucked the life out of the GOP while feeding off the carcass of the democracy that they, themselves, had been feeding off for decades. Deregulation, climate denial, packing the courts with sycophants, drowning federal agencies in a bathtub, regressive taxation, fighting healthcare reform, and inserting religious zealotry into government – all made the US weak and vulnerable to an opportunist like Donald Trump. The Republican Party had made America into a country for sale, and they set the price. Trump is just the crook who bought it with Other People’s Money. And now, if we can’t remove him from office, America will be his 7th bankruptcy.

My optimistic prediction: Mitch, Mitt, and the boys, will pull a Nixon. They’ll inform this masterfully impeached president that enough senators will turn on him and convict – and that his only move left is to resign. The Republicans are increasingly becoming steeled to the fact that they’re going to lose big in 2020, and this is the time to cut this farcical wizard lose. The negotiations with the Democrats will be the final act of this drama. I can’t wait. Popcorn, anyone?