Categories Menu
Home » International » (UPDATES) Greenland Is Not for Sale, but Denmark Will Consider Buying the U.S. (With Addendum)

(UPDATES) Greenland Is Not for Sale, but Denmark Will Consider Buying the U.S. (With Addendum) 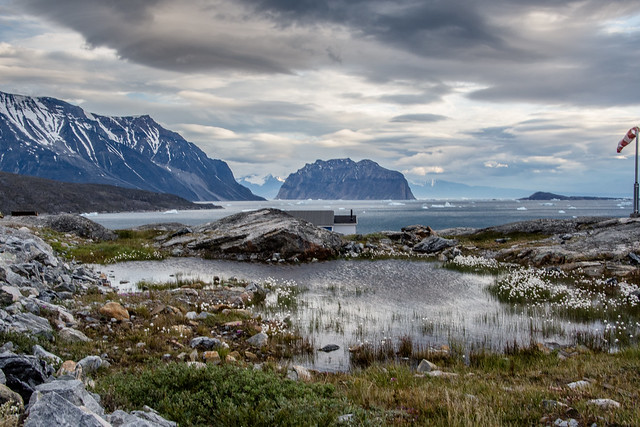 We thought Denmark’s and Greenland’s polite but firm responses to Trump’s harebrained scheme to “buy Greenland” would be the end of a, to America and Americans, embarrassing story.

We thought that Danish Prime Minister Mette Frederiksen’s words, “Thankfully, the time where you buy and sell other countries and populations is over. Let’s leave it there” would convince Trump to “leave it there.” But, no, there would be still more from the clown who keeps on giving – and it is “not The Onion.”

So, here is what hopefully will be a final, final in-rhyme-update to a sorry story by someone who lives in Denmark.

We had his Pablum prepared, ready for him at the bottom of Air Force One’s stairs
The Tinker Toy Set was purchased as gift for when we met
The world’s 2nd Happiest Nation was even ready to fake a smile and not a frown
As they greeted the ever-insulting, grumpy painted clown

Now he won’t see all the students who go to University free, plus living expenses pay
Nor compare his “promised” healthcare for all: with one that works for all every day
He won’t get the surprise: of a 10 political party system, that knows how to compromise
A place he could see: a more equitable sharing, of essentially the same income per GDP

After reading a tweet, Denmark was ready to meet
And show him a country with a paid vacation of five week
A place where a paid 52-week maternity leave: is real not a dream
A Capitalistic country with a positive trade balance plus a budget that’s balanced!

Perhaps next time he’ll think ahead
Before impulsively blurting out crazy things from his head
Meanwhile little Denmark will survive, as happily as ever
So, Trump won’t come, thankfully not now, hopefully never

The man who earlier today decreed that American Jews who vote for Democrats either “lack knowledge” or are “disloyal,” in another temper-tantrum abruptly cancelled a planned trip to Denmark because, as Trump himself tweeted, the Danish prime minister, Mette Frederiksen, “would have no interest in discussing the purchase of Greenland.”

Another pathetic example of this administration imitating satire

We have all heard by now of Trump’s latest harebrained scheme to buy Greenland, the world’s largest island, from Denmark.

First reported by the Wall Street Journal, this machination is being taken seriously by some, laughed at by most, including the Danes and the Danish government.

According to the Washington Post, Greenland’s Ministry of Foreign Affairs said Friday that the island is not for sale: “Greenland is rich in valuable resources such as minerals, the purest water and ice, fish stocks, seafood, renewable energy and is a new frontier for adventure tourism…We’re open for business, not for sale,” the Ministry said.

Other Danish politicians were a little less diplomatic.

• Former prime minister Lars Lokke Rasmussen: “It has to be an April Fool’s joke. Totally out of season.”

• Foreign affairs spokesman for the Danish People’s Party, Soren Espersen: “If he is truly contemplating this, then this is final proof, that he has gone mad…The thought of Denmark selling 50,000 citizens to the United States is completely ridiculous.”

Martin Lidegaard, senior lawmaker of the Danish Social Liberal Party and a former foreign minister, calls the idea “a grotesque proposal” and adds, ”We are talking about real people and you can’t just sell Greenland like an old colonial power…”

There have been precedents. In 1867 the United States purchased Alaska from Russia. In 1917, Denmark sold the then Danish West Indies islands to the United States for $25 million. They are now called the U.S. Virgin Islands.

But this is the Year of the Lord 2019, and one of the first things that comes to mind is whether it is even legal, moral or practical to purchase an island along with its 56,000 human beings, its own government, its own culture, its own ambitions for the future.

Satirist Andy Borowitz at the New Yorker has some even more surprising news.

He reports the government of Denmark has announced that it would be interested in buying the United States instead, but with the exception of its government.

“As we have stated, Greenland is not for sale,” a spokesperson for the Danish government said on Friday. “We have noted, however, that during the Trump regime, pretty much everything in the United States, including its government, has most definitely been for sale.”

A key provision of the purchase offer, the spokesperson said, would be the relocation of Donald Trump to another country “to be determined,” with Russia and North Korea cited as possible destinations.

Read more about this breaking news here and stay tuned for how this latest Trump caper will run its course.

The view from Denmark, but first a Cagle cartoon perspective: 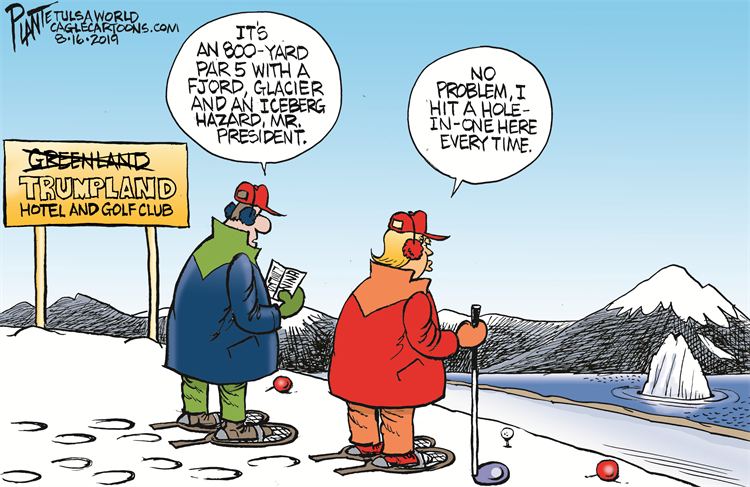 Instead of focusing on impressively large Greenland as the mark
He should learn some lessons from small Denmark
It’s the world’s second happiest nation
With positive budget and trade balances unlike the USA, he should see it with admiration

Ease to start a business is rated number 3: USA’s number 8: not so great
Dane’s public trust in government rates number one: in the USA it’s a boo! at 22
USA’s happiness rates a 12: down from Denmark’s number 2: so, which would you choose?
USA’s healthcare costs are way out of sight: for Danes it’s a right and a delight

For the average person to get an education: all the way to be an MD, in Denmark it’s free
Of course, it takes lots of taxes: but no student debt: and a good career is easier to get
With 5-week vacations and a paid one-year maternity leave: the Danes feel pleased
The difference between the rich and poor is far less: I feel their system’s the best

Now on guns: Danes feel they have the “right” to be safe: so, restrictions are in place
So, if you want to hunt, just pass a test and fire away: you can have a gun in a safe place
No “minimum wages” government set there: but unions insure each have a fair share
So, Mr. Trump: Denmark’s a Capitalist Social Democracy that’s worth for you to see!