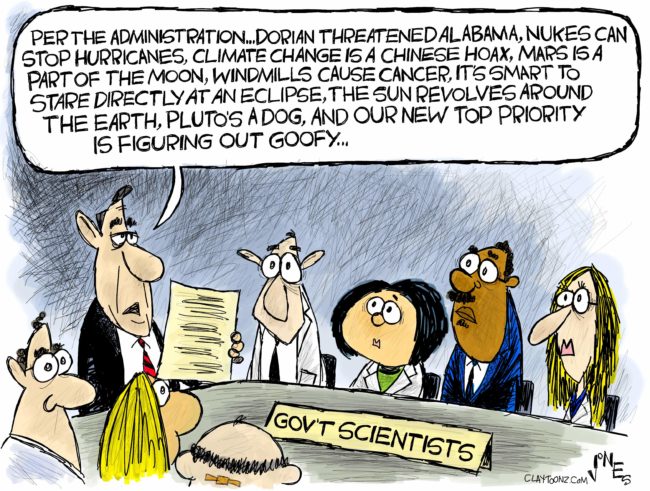 Fake news is not news and fake science is not science. And now, a future administration will have to repair the credibility of the National Oceanic and Atmospheric Administration along with other scientific agencies within the government.

Science used to be non-partisan. But over the last few years, Republicans have made climate change a political issue. Somewhere along the way, facts became liberal. But even previous Republican administrations, while often quarreling with government scientists, did not blatantly try to change scientific fact, like the location of a hurricane.

Donald Trump doesn’t care about facts and he doesn’t put any priority into science. He’s a man who believes climate change is a hoax created by China. He once lied about the rain and claimed it stopped raining when he started a speech when it didn’t. He claimed the noise from windmills cause cancer.

The NOAA hasn’t had a confirmed leader since the Obama administration. On Friday, the NOAA, which oversees the National Weather Service, took the very unusual steps of issuing a statement criticizing one of their own meteorologists for contradicting Donald Trump and issuing an accurate weather report.

The NOAA isn’t backing up Trump to advance hard science, but only to coddle his ego and narcissism. Last week, Donald Trump doctored a weather map with a Sharpie after being criticized for warning Alabama about being impacted by Hurricane Dorian when that state wasn’t in its path. Trump has spent over a week defending a wrong tweet. Most people would say “oops” and move on with their lives. Trump, being a narcissist, can’t admit a little mistake. But now, this little mistake is destroying the credibility of the government’s science agencies.

First, the agency warned its scientists not issue any statements correcting or contradicting Donald Trump. After their bureau in Alabama did just that and Trump lost his shit, the NOAA backed up Trump with an official statement despite provable facts.

This isn’t the first time the Trump administration has ordered its agencies and government employees to contradict facts.

Shortly after lying about having the largest crowd size of any inauguration in U.S. history, Trump ordered the National Park Service to hunt for photographs that would support his claim. They didn’t find any.

Donald Trump created a commission to prove his claim about voter fraud. After the commission failed and disbanded, a member claimed its creation was rooted in Trump’s rage at losing the popular vote to Hillary Clinton.

When Trump claimed Middle Easterners were part of the migrant caravans headed to the border, he tried to get government agencies to support his lie. They failed.

Trump ordered agencies to create an impression that there would be a middle-class tax cut before the midterm elections (even though Congress wasn’t in session), which he had lied about. The tax cuts never happened.

After Trump created a bogus story about migrant women being blindfolded and gagged by drug traffickers, a top border official went on an internal hunt for information to make the story true. He failed.

The Department of Homeland Security released a slick presentation to support Trump’s lie that 4,000 known terrorists were prevented from crossing the border with Mexico.

Donald Trump is inflicting damage to this nation that will take years to repair. Our allies can’t trust us. A new report came out this morning that the CIA snuck a spy out of Moscow out of fear Trump would disclose him to Vladimir Putin. The Justice Department has become a lackey for Trump’s crimes. The entire Republican Party in Congress has become a cult. The State Department has to explain why we can trust promises from Kim Jong Un and the Taliban. The Defense Department has to publicly support losing funding to Trump’s racist, useless border wall. The military has to justify spending money at Trump’s resorts. The White House sends out lackeys to tell us the free press is an enemy to the United States. Now, the government’s science agencies have to sell us debunked science.

The only good thing is that we still have eyes, ears, and logic on our side. Unfortunately for Trump cultists, they’ve been told not to believe what they see and hear and they’re complying.

Maybe you and I can argue over the differences between Pluto and Goofy, but we should all know the difference between being rained on and pissed on.