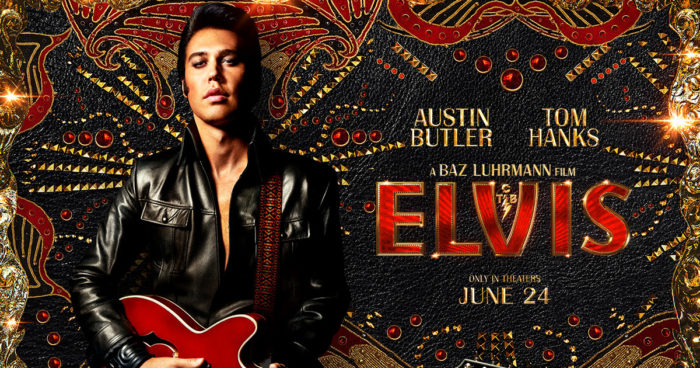 I read seemingly every review on the new Elvis movie and some critics seem locked into the traditional formula and norms for biopics. Here’s the bottom line: forget any negative reviews and forget any other biopics that you’ve seen. Elvis is different and is likely to have an influence on future film biographies.

“Elvis,” which dethroned mega-hit Top Gunn: Maverick in its opening weekend, isn’t La Bamba, it’s not the Johnny Cash or Freedie Mercury bios. Most movie bios about singers and musicians continue to have a structure still influenced by 20th century movie bio flicks such as James Cagney as George M. Cohan in “Yankee Doodle Dandy” or The Jolson story. These two films seemingly spawned a series of great, forgetful, trite or downright awful bio pics and movie biography cliches.

No, I didn’t find director Baz Luhrmann’s fast-paced editing annoying. Nor did I obsess over “Hey, there’s Tom Hanks playing Col. Tom Parker with a lot of make up!” Hanks’ make up wasn’t off-putting if you follow the story and performance rather than studying prosthetics used to turn him into a truly grotesque Parker. Hanks has gotten a bum rap on his make up but he and Luhrmann deserve every bit of criticism and more for having Hanks talk in an accent when the real Parker didn’t have one. No matter what the justification: it was a looney decision.

And then there is Austin Butler as Elvis. He resisted the temptation to do an (easy) Elvis impersonation and tried to recreate as much as humanly possible Elvis as person.

In a performance that demands an Oscar nomination, and win, Butler becomes Elvis (or so says Priscilla Presley and others who knew Eivis). Butler spent two years studying every Elvis inflection, body movement, speech pattern, vocal pattern and style and it paid off. The 30-year-old actor sings for early Elvis songs (his showcase song is Trouble), and is mixed with Elvis in later songs. All Hollywood bio pics take liberties with the facts (the fake Christmas for the 1968 comeback special shown in Elvis never happened) but what Hollywood bio has not done that? (The old Jolson Story totally cut out Jolson having a brother and the Elvis movie cuts out Presley’s girlfriends after Priscella).

Some reviewers are frozen in the old bio pic formula and standard biopic editing. No, Elvis’ structure and editing aren’t confusing or a Luhrmann ego trip, just his style. It is different in editing and pace (a barrage of images, quick cuts, even at one point a comic book page), structure (shots aren’t all in chonological order), and aspiration (Luhrmann considers it an opera in three acts and also wanted to show how music and America changed over the decades that Presley was on the scene).

This reviewer from the Eureka newspaper got it.

FOOTNOTE: The movie recreates Elvis’ humilation on the Steve Allen Show. This is the actual clip of the infamous Steve Allen appearance. Allen put Elvis on after Presley was on the Milton Berle show and controversy was raging about Elvis’ hip sweviling which was highly scandalous in that era. Steve Allen agreed to have Presley on his NBC show which aired opposite his CBS rival Ed Sullivan so Elvis would preview his upcoming hit “Hound Dog. Allen but nixed the body moves, had Elvis dress in a tux and had him sing Hound Dog to a female basset hound.

Allen was typical of many in the Sinatra-rules Greatest Generation and didn’t understand or like what he was doing and was seemingly trying constrain, homogonize and mock him. (On You Tube you can see another greateset generation Dean Martin introducing the Rolling Stones on the Hollywood Palace and literally rolling his eyes when they finished). In his later years Allen insisted that he wasn’t trying to diss Elvis; Elvis called it the most humiliating moment of his career. After that appearance Allen wanted to book Presley again butSullivan swooped in, offered Presley a ton of money, and contracted him to go on his show for multiple appearances without curtailing his body moves (but shooting him from waist up in many appearances). The contrast in performaces of the constrained Presley on the Allen show and on the Sullivan show was stunning.

Elvis with the dog on Steve Allen:

Elvis doing the song later on Ed Sullivan. Note the contrast to the Steve Allen show:

Dean Martin presenting The Rolling Stones on The Hollywood Palace with some disdain and rolling his eyes after they sing:

Interview with the real Col. Tom Parker. Wait…where is his accent?