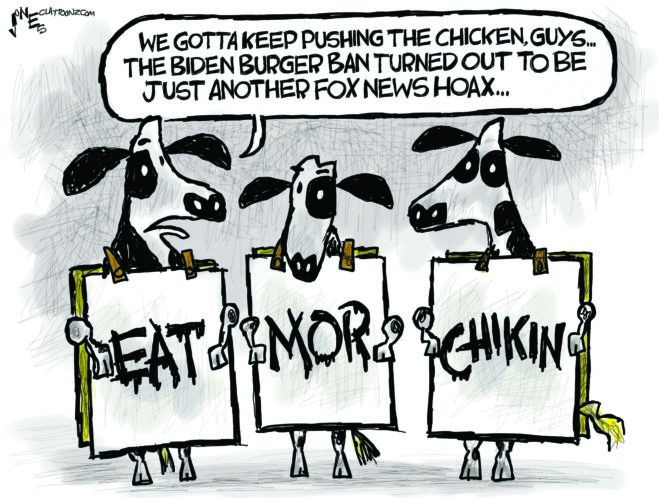 This week, I saw a political cartoon of a man being demonized for not wearing a mask while mowing his lawn. I saw another demonizing a man for not wearing a mask inside his own home. This is not happening. Nobody is being castigated for being in their yard or their own home while not wearing a mask. Yesterday, the president said if you’ve been vaccinated and you’re outside, even with a small gathering, you can go without a mask. And then…there’s Tucker.

While conservatives are once again pretending to be the most victimized people in world history and claiming they’re being attacked for not wearing a mask in their own yard, Tucker is telling his viewers to verbally assault people for being outside while wearing a mask. It gets worse. He’s telling them to call the police if people have their children wearing a mask. Tucker equated putting a mask on your child with child abuse. Personally, I think you should call protective services on people who play Tucker’s show while their children are in the room.

Meanwhile, in the podcast world, comedian and whatever the hell else he’s famous for, Joe Rogan is telling his viewers that if they’re young and healthy, then they shouldn’t be vaccinated.

Other people are telling lies that vaccinations are leading to miscarriages and a private school in Miami is even threatening its staff with termination if they get vaccinated.

Here’s a piece of advice: Do not take medical advice from cartoonists, talk show hosts, stupid private school administrators, comedians, podcasters or any other non-medical professionals who disagree with science.

In fact, don’t listen to anything you hear on Fox News…or The New York Post.

The New York Post, a really crappy right-wing newspaper that may only be one step above the Epoch Times as a legitimate news organization, reported, “Unaccompanied migrant kids brought from the U.S.-Mexico border to a new shelter in Long Beach, Calif., will be given a copy of her (Kamala Harris) 2019 children’s book, ‘Superheroes are Everywhere,’ in their welcome kits.”

Chairperson of the Republican National Committee, Ronna McDaniel, tweeted, “After learning officials are handing out Kamala Harris’ book to migrants in facilities at the border, it’s worth asking… Was Harris paid for these books? Is she profiting from Biden’s border crisis?”

No. Vice-President Harris is NOT profiting from sales of the book generated by the border crisis. No, taxpayers are NOT funding the book.

Maybe someone should ask Ronna McDaniel about the RNC spending thousands to purchase Donald Trump Jr’s crappy book in order to put it on The New York Times bestseller list. You can also ask her why every RNC event is now held at shitty Trump resorts. Or maybe someone should ask Senator Josh Hawley why his book about the evils of big tech is being hawked on Twitter and sold on Amazon. OK, that doesn’t have anything to do with the issue, but it’s OK to include because Josh Hawley is a horse face terrorist-supporting asshole.

These people asking if Kamala Harris is profiting from her book being given to migrants (it’s not) are the same jackasses who sat quietly and enabled Donald Trump’s grifting of the United States’ treasury for four years. Screw you, complicit jackasses.

At this very moment in Florida, there are Secret Service agents in golf carts they had to rent from Donald Trump to protect Donald Trump. We are still pumping taxpayer money into Trump resorts.

When do these people learn? Fox News is being sued for spreading the lie Donald Trump won the election but it was stolen by Joe Biden with the help of voting machines. Even though we all know it’s a lie, a lot of politicians are still spreading it and other Republicans who aren’t spreading it are afraid to debunk it.

During the buildup to the invasion of Iraq, Vice-President Dick Cheney refused to debunk the myth Iraq and Saddam Hussein were behind the terrorist attack on 9/11. When asked, Cheney said, “I can see why people would believe that.” He didn’t spread the lie but he didn’t debunk it either. He never said, “Oh, that’s not true.” He allowed people to continue believing it, despite knowing it was b.s., because it helped the Bush administration’s agenda.

Today, a lot of Republicans won’t debunk the Trump lie he won the election, not so much to help an agenda but more because telling the truth is disloyalty to Trump, which they would be punished for.

Fox News anchor John Roberts issued a correction this week. He explained that last week, his network showed a graphic detailing a study from the University of Michigan saying a national decrease in the consumption of red meat would have a huge impact on climate change. He said the graphic “implied” it was part of President Biden’s plant to deal with climate change…which is not true.

His retraction is NOT true. Fox News did not “imply” President Biden wanted to decrease American consumption of red meat. They made claims of a Biden burger ban.

Larry Kudlow said on his Fox News show, “No burgers on July Fourth. No steaks on the barbie. I’m sure middle America is just going to love that. Can you grill those Brussels sprouts? So get ready: You can throw back a plant-based beer with your grilled brussels sprouts and wave your American flag. Call it July Fourth green.” That’s not implying.

Then, the lie was repeated by Nikki Haley, Donald Trump Jr, Marjorie Taylor Greene, Lauren Boebert, Madison Cawthorne, Greg Abbott, and Brad Little. Do you believe each of these people will give a retraction or an apology? Do you believe all Republicans will now believe the burger ban story is a big crock?

MAGAts will continue to believe lies the election was stolen, the virus is a hoax, the vaccine contains a microchip that will track you, the vaccine will give your baby flippers, taxpayers are paying for Kamala Harris’ children’s book to be given to migrant children, and Joe Biden wants to ban burgers. Hell, these liars still believe President Obama was born in Kenya.

Personally, when someone lies to me, I take it as an insult. It’s disrespectful. You should stop listening to people who insult and disrespect you.

But I must admit, there are some things I choose to believe. I believe all these Fox News and conservative liars are a–holes. I’m pretty sure that’s true.