Posted on May 14, 2022
You are here: Home / Arts & Entertainment / Cartoons / DOMESTIC INFANT SUPPLY 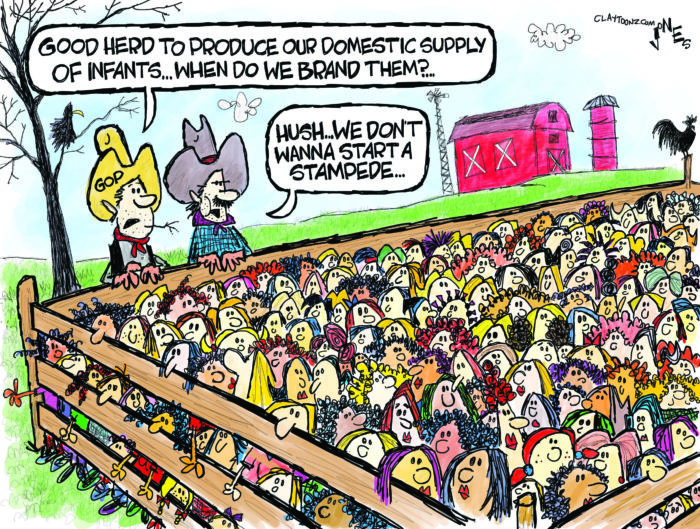 What was leaked out of the Supreme Court last week was a draft and not the final written opinion for the majority. Chief Justice John Roberts has confirmed its authenticity but has declared this isn’t actually the final vote, though it is. But, I’m sure the draft will change because what we saw from the leak is a rough draft before someone was able to tell Justice Samuel Alito not to say the quiet part out loud.

I’m sure at some point, a law clerk would have suggested they remove the line about women being cattle.

At first, I thought this was some social media meme propaganda. Liberals do that stuff too which really pisses me off because we don’t have to make shit up to fight Republicans. They give us all the facts we need. And it sounded so ridiculous that I immediately smelled bullshit. A Supreme Court Justice wouldn’t really write a line in a legal opinion that views women as cattle. But, this is true. I fact-checked this and yes, the brief has a line about “domestic infant supply.”

On page 34 of the 98-page draft of the majority opinion, Alito wrote, ““Nearly 1 million women were seeking to adopt children in 2002, whereas the domestic supply of infants relinquished at birth or within the first month of life and available to adopt had become virtually nonexistent.”

I don’t know where to start with this. Oh, wait. Yes, I do. Bullshit!

It doesn’t matter if there’s a dropoff of “infants” available to adopt to justify stripping away a constitutional right women have had for the past 48 years. The reads like the majority views women as cattle who should be used as birthing boxes for people who can’t have their own children. It reads like women should be used to create an inventory for Babies-R-Us.

During oral arguments on this same case, Amy Coney Barrett said she “might not be inclined to protect a woman’s right to an abortion,” since adoption is an option. This isn’t less of a legal opinion and more of a moral one from someone who doesn’t have morals. I don’t care if you are a Supreme Court Justice, it’s not your place to make those decisions for other people. Yet, that’s what they’re going to do.

Justice Barrett, just because you had seven kids doesn’t mean every woman in the nation should be forced to have seven kids. The seven kids thing is scary as it gives me the impression Barrett, who plans to force others to live by her morals, is also opposed to birth control.

The majority of the Supremes, not the cool ones who sing “Baby Love,” are justifying destroying a constitutional right on religious zealotry, not the law.

Justice Clarence Thomas said Friday that the court can’t “give you only the outcome you want,” or be “bullied,” echoing a line in the draft opinion that says the court shouldn’t let society’s opinion impact their decision. This motherfucker’s wife helped plan the insurrection after voters didn’t give Republicans the outcome they wanted. Obviously, the Thomases don’t believe society’s opinion (votes) should impact who they want for president…or dictator.

What should be unconstitutional is five uptight idiots with sticks up their butts forcing America’s women to become baby factories. Hell, it sounds like Amy Coney Barrett is a baby factory all by herself, but that doesn’t mean the rest of the women in this nation should be forced to be breeders.

But the truth is, there are plenty of children available for adoption. What the Supremes want are more options, more selections, more choices. Can’t find the kid you want to adopt? Then maybe we can have one made for you. What do you want in an adopted infant? Blonde hair, blue eyes, light skin…oh, are you OK if they come with a tail and flippers? Yeah, there’s gonna be those since we’re forcing girls to give birth to their uncles’, brothers’, and daddies’ babies. In a lot of states, they want to force the birth of the infant even if the doctor knows the baby can’t survive outside the womb.

And for the infants who can’t be adopted by the perfect white families, fuck those infants. Republicans have spent the past 48 years trying to force women to have babies that Republicans have made no plans for. Republicans’ concern for the unborn stop after they’re born. They oppose every public effort to house, feed, educate or provide healthcare for poor children.

How in the hell can you be the party that wants to force more poor people to create humans while also opposing social welfare? You want to force poor women to have babies while gutting the schools those children will attend where you have taken away their lunch.

This has nothing to do about caring for children and has everything to do with religious zealotry. These Republicans want women to be cattle. Just because Amy Coney Barrett thinks she’s a cow doesn’t mean other women should be treated that way.

Women, if you don’t want to be herded by Republicans, vote in November because Mitch McConnell is also saying the quiet part out loud. While the Supreme Court says this is about states’ rights, McTurtle has already talked about making a federal law banning abortion nationwide.

Keeping Republicans from taking the House and Senate in November may be our last opportunity to save women’s rights.