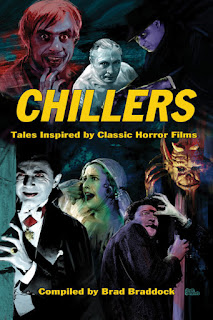 Over the long holiday weekend I immersed myself in “Chillers,” a new anthology, as the cover notes, of “tales inspired by classic horror films.” They’ve been gathered by Brad Braddock of Arcane Shadows Press, which recently released another anthology, “Bela Lugosi: The Monogramthology,” which included homage fiction on the poverty-row films Bela Lugosi made for Monogram studio in the 1940s.

Homage fiction, I prefer that term to “fan fiction,” is probably a mixed bag to some. I imagine some purists avoid it. (I’ve had a few debates with Agatha Christie fans over the new “Poirot mysteries” from Sophie Hannah; I appreciate them and devour every one.). I enjoy the genre and am glad Braddock is helping resurrect it. Above-average homage fiction — kept in its proper apocryphal shelf — provides a shot of positive endorphins to readers wanting more from the art they love. Even mediocre homage fiction — and there’s been a lot of that from Jane Austen novels — reinforces our appreciation of the original material.

The short stories in Chillers are of variant qualities, but all are well-crafted, unique efforts by serious authors, who have other accomplishments in the genre. I’ll focus this review on a few I particularly enjoyed but reassure readers that there isn’t a “clinker” in the collection. (I assume readers know the films that serve as foundations for the tales, and will avoid plot details; the better for readers to enjoy the stories.)

* Gregory William Mank — who has written several excellent non-fiction genre books — writes the short but moving “Elizabeth,” a story of Dr. Frankenstein’s wife at age 70, reflecting on her life with Henry, 25 years after his death, and “the Creature.”

* Frank Dello Stritto, another favorite genre writer, manages to capture the spirit of fan convention events, such as Monster Bash, in “Emmy Knows Monsters.” It’s a tale of a very young monster movies fan who has the magical ability to see the lost, early film cuts of such classic films as “The Mummy,” “Freaks,” “King Kong,” and more. The ending gives me the same pleasant feeling I get from the finish of one of my favorite, gentle spooky movies, “Curse of the Cat People.”

* Robert Kokai Jr., also known as monster show host Drac, has an intriguing tale, “Cryptic,” which explores how “Imhotep,” so well portrayed by Boris Karloff in “The Mummy,” manages to rejuvenate himself through his many, many centuries of existence. It’s narrated through the eyes, literally, of one of his victims.

* One of my favorite young authors, Christopher R. Gauthier, whets my appetite for his upcoming novel with the short story, “Dracula Never Dies: A Dedication to Bela Lugosi.” Written with lyrical, highly descriptive and emotional prose, it relates the once-famous star, now aging, “Bela Vorlock,” reduced to performing spook shows before unappreciative teens. The story almost places me right in the audience of those poorly produced spook shows Lugosi endured starring in to pay the bills 70-plus years ago.

* Braddock’s “The Vampire Bat Prelude,” entertained me enough to re-watch the vintage classic with an all-star cast, “The Vampire Bat.” The prequel sheds more light on the manipulation and destruction of loyal servant Emil Borst by the evil Doctor Von Niemann, portrayed by Lionel Atwill in the film. The exploited Herman Gleib, played by Dwight Frye, also is in the tale.

* A pithy and fascinating story from novelist Christine M. Stoltis, “Hasten: A Prelude to Haxan,” pays homage to the famous silent documentary on witches by portraying a real female servant of the devil, one who has no fear of being captured and burnt by humans.

* The story, “The Open Window,’ by Stefanie Kokai, also known within the genre as Carita Drac, took a page or two for me to get into but ultimately sucked me in. It’s a story of a young woman slowly being dominated and turned into a vampiress by a bloodsucker. The contrast of the “count” during their late-night visits, soft words, gentle caresses, and grotesque slurping of blood, is effectively conveyed on print.

* “An Ending for Bowery at Midnight,” by Todd Shiba, is, like his story in … the Monogramthology on “Black Dragons,'” a sly, over-the-top riff satire on how to take movies that already are bizarre and make them even more bizarre. Shiba know his stuff and is always a good read, but his story seems more like something Frank Henenlotter would conceive of rather than Wallace Fox of Monogram. Perhaps that’s the point.

I appreciate all those who contributed to the anthology. These are labors of love, far more than money. Hopefully, enough readers will like the efforts enough to provide a stimulus for another collection. (This review is cross-posted at the Plan9Crunch blog)