Let the whining begin. Seldom have grownups been so desperately sensitive and given to bitter weeping:

I will pass over the fact that virtually every statement in the story is a lie or a blatant distortion.*

[* e.g. Psaki is the former State Department spokesperson. Wikipedia: “Previously, she served as the spokesperson for the United States Department of State and held various senior press and communications roles in the Obama White House. She has also been a CNN contributor.” Emphasis added.  Funny that being a Fox News talking serpent never seems an impediment to service on the flip side of the coin. Also note that Sean Spicer STARTED his press conference with a BLATANT LIE: that Trump’s inauguration was the biggest crowd ever. And never backed off that flagrant mendacity. Fox fails to note this in their rush to whine that they’re being MISTREATED! Poor snowflakes. ]

We are at that moment when optimism is at its peak. The monstrous depredations of the past four years seem either behind us, or are fixable in the near future.

But that is a false hope.

Personally, I am optimistic and hopeful that we can come together in the face of common foe, as we did for all of a few weeks after 9-11-2001. But my reason overwhelms my optimism.

The Republicans have no more interest in facing a common foe today than they did then: you might recall that the Republican leadership immediately grabbed 911 for partisan political advantage and attempted to own it in all subsequent elections. Bipartisanship be damned. Democrats need not apply. NINE-LEBBIN!

Beginning in 1986, through a mouth that is indistinguishable from an anus, Rush Limbaugh decided that Republican philosophy was NOT that we disagree with our political opponents on policy — in a civil, rule of law process, as expressed and implied in our constitution — but, rather, that we (Republicans, that is) must HATE our opponents personally for being defective and brain-damaged.

Limbaugh ofttimes expresses the sentiment that “liberalism is a mental disorder.” And its equivalents. 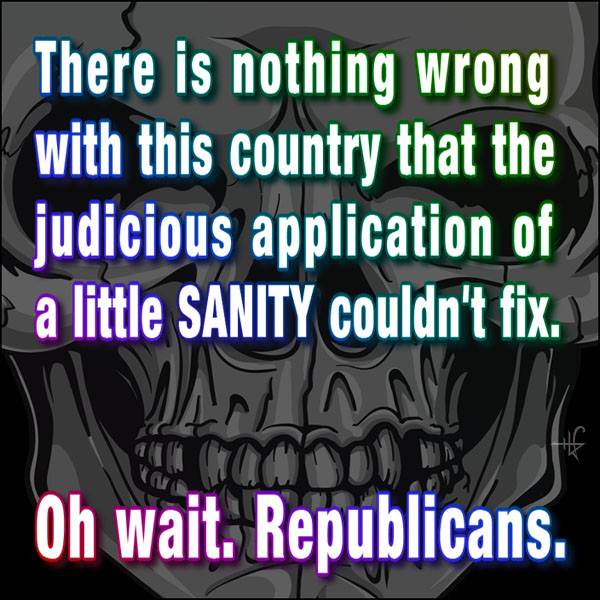 “Liberals” became too flaccid an othering, so the old standby for “commies” was adopted and retasked: “Leftists.”

Limbaugh’s tack has been adopted by the entire fleet (enema) of Right wing outlets and if you doubt me, watch any one of them for an hour, if you can stomach it.

This is nothing new. We have become inured and somewhat immune to hearing it, and therein lies the rub.

It is, while obnoxiously ubiquitous, also quite universally real.

In contradiction to all evidence, a large majority of Republicans believe that this election was stolen, and that their Führer was deposed illegally.

Just as we have pretended that their unending 24/7/365 litany of hate and lies on GOP-media have NOT had an effect and are NOT a clear and present danger to our democracy if not to our very lives. Turns out that the one thing that ALL Americans have in common in these dark days is a near-infinite capacity for ignoring unpleasant truths in hopes that they will go away.

This was Donald Trump’s response to Coronavirus as AT LEAST 419,749 dead Americans can testify. (Except they can’t because they’re dead.)

You see: an entire generation of Republicans/Conservatives (there is no actual difference, but the distinction is maintained for campaign contribution and news distortion reasons) has been conditioned to HATE Democrats and liberals (not the same thing) far beyond any policy disagreements.

It has been conditioned and reinforced with a zeal that would do Dr. Pavlov proud.

Democrats: There should be a path to citizenship for immigrant children who have lived their entire lives in the USA through no fault of their own.

GOP/Conservatives: Leftists! Liberals! Kill them all!

Democrats: We need masks and lockdowns to manage a pandemic out of control. 4,000 Americans are dying every day!

We no longer have any policy disagreements, save one:

Democrats: We are Americans. We are citizens.

GOP/Conservatives: No you’re not! Come and take it! Antifa wants to KILL US ALL! Freeeeeeeeeeeeeedom!

You cannot say “come let us reason together,” when those to whom you speak have abandoned reason altogether.

This might seem harsh, had one not lived in the USA today. But it is accurate.

The first political responses to the electoral outcome (discounting the violence and conspiracy theories and seditious assault on capitols) is to attempt to twist the President’s message (unity) into a false-hypocrisy claim and demand that impeachment of the predecessor over blatant incitement to insurrection be dropped.

Because there was never a chance in hell that the GOPs would consider us as HUMAN for enough consecutive nanoseconds to take any proposal seriously, even it it were a proposal to save our nation from an increasingly inevitable civil war.

I want, with every fiber of my being, to return to a politics of disagreement on policy, rather than the one-sided disagreement that we ought to allowed to live in THEIR country, which actually translated to whether we should be allowed to live, period.

But it isn’t in the cards. Human nature is what it is, and a generation of non-thinking, uninformed and poorly educated GOPs has been taught to think of us ONLY as the enemy. Even to the extent of siding with Vladimir Putin and his anti-American designs, rather than make common cause with fellow Americans. They have been raised to be cannon fodder, and that’s all that we can expect. Their brains are sealed with the endless GOPaganda of hatred. And “other.” And “Liberalism is a form of mental disease.”

It is Ayn Rand on steroids, with the virtue of selfishness front and center.

The GOP reminds me of the rancher’s wife.

One day while they were driving in the pickup, a rancher and his wife stopped behind a young couple in another pickup

The girl had her head on the guy’s shoulder holding close. He had his right arm around her.

The rancher’s wife said “Aww. that’s so sweet. We used to be like them.”

And then she asked “How come we don’t do that anymore, honey?”

To which the rancher replied: “I don’t know, dear. I haven’t moved.”

The Democrats have stood for compromise and reasoning together (far too much, in hindsight) for the entire period that Limbaugh has been spewing his poison over the airwaves.

And the GOPs have never once bothered to take them up on it.

So we can only say, as they oil up their rifles: We don’t know, Republicans. We haven’t moved.

Democracy works. But ONLY if you let it. They have refused to let it work since Gingrich, at least. 1994.

Nobody would like to see kumbaya succeed more than I.

And I would love to grasp the chimera that we could still, at this late date, convince the Republicans to honor the Constitution and return to the Rule of Law from the GOP “My way or the highway” philosophy. But that false hope glimmers like a fata morgana — only a mirage, brought on by the excessive heat. (From global warming, which they also deny).

They would rather live in their world of (contradictory) beliefs than live in the real world that the rest of us inhabit.

Even if it means shooting us.

And they’re willing to make that sacrifice, for the good of their party.

My advice is to stock up on ammo. It’s going to get worse before it gets better.

Even if we haven’t moved.

UPDATE: To get a sense of just how ridiculous the Fox News story above is, watch this side-by-side video comparison: