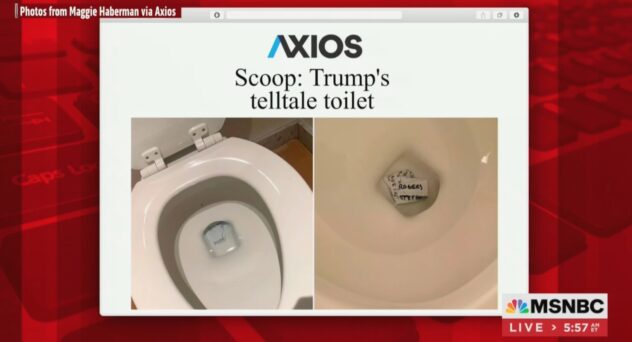 The popular website Axios is now flush with success after running a big scoop: exclusive photos allegedly showing Donald Trump’s toilet papers. The pix show ripped up documents — one of them in what looks like Trump’s distinctive writing– on the bottom of two toilet bowls.

“You have to be pretty desperate to sell books if pictures of paper in a toilet bowl is part of your promotional plan,” a Trump spokesperson told Axios. “We know…there’s enough people willing to fabricate stories like this in order to impress the media class — a media class who is willing to run with anything, as long as it anti-Trump.”

Some may be bowled over by the photos and others may be skeptics but the truth is sure to come out in the end.

Prediction: Donald Trump’s Presidential Library will be in Flushing, NY.

A lot of people are now taking the plunge on Twitter, which is clogged with reporting on the story and reactions to it.

Under the presidential records act, documents generated by and sent to presidents are to be preserved by the office. Trump’s habit of ripping paper that had to be taped back up was known; his habit of discarding them was not https://t.co/4ys4ncToiY

Lordy, there are pix.
Love “Stefanik” at the bottom of the toilet. Her Dem House challenger should put that in a campaign ad (“Let’s flush Stefanik on Election Day”). https://t.co/AEruX3d8y7

at least Nixon had plumbers

?FIRST on @axios: Trump’s telltale toilet … ?@maggieNYT? obtained these photos ahead of the Oct. 4 publication of her book “Confidence Man”

Source tells her pic on the left shows a White House commode
Pic on the right is from a Trump overseas trip https://t.co/6opWty4kjd

A flushing toilet should be the last sound we ever hear of the Trump presidency. A clogged toilet being plunged will forever be my lasting image of his presidency.

How many essays will be launched by folks pondering the metaphor of Congresswoman Elise Stafanik’s name firmly stuck to the bottom of Trump’s toilet bowl.

When asked about her name being on the paper in Trump’s toilet, Elise Stefanik reportedly flushed.

Elise Stefanik is trying to drag our country down Trump’s toilet.

I’m Matt Castelli – the only Democrat who can & will defeat Stefanik in #NY21.

Help us protect America from being flushed down the drain – follow this account, retweet, and join us.https://t.co/0KwgmAksXr

Who knew that when Trump lamented 'Americans have to flush the toilet 10 to 15 times, as opposed to once’ he was complaining about his own document cover-up?

I will say this about this photo of documents trump threw down the toilet… if there’s any place Elise Stefanik and Mike Rogers belong, this is it. pic.twitter.com/CN8oQSeQ4m

.
OMG
What a horrible thought . . .#TrumpToilet

Perhaps in future Trump Library museum, visitors will be encouraged to tear up official documents and flush them down a gold toilet.

Perhaps if he wasn’t flushing documents down the drain, Donald Trump wouldn’t have had to flush 15 times.

OK this seems a natural turn in the Trump era: actual pictures of the documents Donald Trump tried to flush down the toilet. Gives new meaning to the term scoop. https://t.co/Y2xYtci3TW

And just when I thought I was flush out of hat ideas. pic.twitter.com/n8PP9U6fVC