Posted on May 3, 2021
You are here: Home / Movie Reviews / Attack of The Giant Leeches – Terror In The Florida Everglades!

Review by Steve D. Stones
Here’s another awesome Blu-Ray double feature put out by Retromedia – Attack of The Giant Leeches (1959) (aka The Giant Leeches) with Teenagers From Outer Space (1959). Both prints of the films are in excellent quality. Produced by Roger Corman and his brother Gene, Attack of The Giant Leeches was directed by Bernard L. Kowalski and features the bizarre organ music of Alexander Laszlo. The film also features July 1959 Playboy centerfold – Yvette Vickers. A skim budget of $70,000 was all it took to produce this B-movie masterpiece.
A swamp hillbilly from the Florida Everglades named Lem Sawyer (George Cisar) encounters a strange creature in the swamps while poaching for wildlife. Sawyer fires several shots from his gun into the creature, but is unable to stop the creature as it swims away. Later that evening, Sawyer reports this incident to his swamp buddies at Walker’s General Store. His buddies laugh at him and don’t believe his wild story.
That same evening, Dave Walker (Bruno VeSota), owner of Walker’s General Store, confronts his wife Liz (Yvette Vickers) for being bossy with him and for prancing around the store while scantily dressed in front of his swamp friends. Liz appears to be bored with the marriage and does not listen to a word Walker says to her.
Unknown to Walker, Liz has the reputation of being the town harlot. Liz leaves Walker’s store for a date with Lem that night. During the date, Lem and Liz are attacked by the same creature that Lem confronted with his gun. Lem is killed by the creature as game warden Steve Benton (Ken Clark) arrives in time to save Liz. 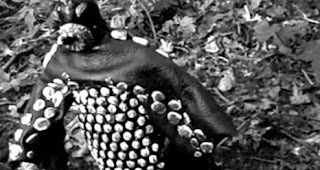 Refusing to learn from the attack, Liz continues her harlot ways by parking in a car by the swamp with Cal Moulton (Michael Emmet) as the two kiss and make out on a blanket. Dave Walker catches the couple in the act and threatens his wife and Cal with a shotgun. Walker becomes angry with the couple and orders that they walk out into the swamp where they are attacked by giant leeches and taken to an underground cave. Walker later hangs himself in jail because the local authorities believe he was responsible for killing Liz and Cal.
After two poachers are attacked in their boat and taken by the giant leeches, a search party led by game warden Benton searches for the two poachers and Liz and Cal. Dr. Grayson (Tyler McVey) suggests to his daughter Nan (Jan Shepard) and Benton that perhaps giant leeches are living in a cave under the swamp and are responsible for all the missing persons reports. He recommends that a charge of dynamite be placed in the swamp to bring the leeches to the surface. Benton refuses to go with this plan, stating that it’s his job to preserve wildlife and that perhaps the four victims could still be alive in a cave below the swamp.
Although Benton threatens to arrest Dr. Grayson if he’s seen in the swamp with explosives, Grayson and his daughter Nan place a charge of dynamite in the swamp. The bodies of the two poachers and Cal float to the surface as angry Benton arrives at the scene. Grayon’s theory about an underground cave proves to be correct when an autopsy reveals that the bodies had only been dead for a few short hours. Liz Walker’s body is yet to be found. 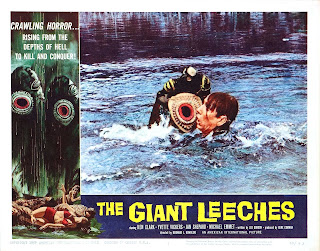 Benton and a diver go into the water with spear guns to kill the giant leeches after Liz’s body comes to the surface from a second dynamite charge. Watch carefully for scuba tanks poking out of the giant leech costumes as they confront Benton and his diver companion in the water. Overall, the appearance of the giant leeches is quite effective.
It’s interesting to note that Attack of The Giant Leeches played on a double-bill on the drive-in movie circuit with director Roger Corman’s film – A Bucket of Blood (1959). In 1960, the film later played on a double-bill with Corman’s – House of Usher (1960). Attack of The Giant Leeches remains in the public domain because its copyright has never been renewed. A remake was made in 2008. I have not seen the remake, but I’ve heard from several sources that it’s not very good.
Director Bernard L. Kowalski also directed another great cult classic – Night of The Blood Beast (1958) which also stars Michael Emmet and Tyler McVey. The bizarre organ music by Alexander Laszlo used in Attack of The Giant Leeches was first used in Night of The Blood Beast.
Sadly, actress Yvette Vickers’ mummified body was found in her home in April 2011 by a neighbor. She was 82 years old at the time of her death. Autopsy reports suggest that she may have been deceased for a year or more before her neighbor discovered her body. Her July 1959 Playboy photos were taken by cult director Russ Meyer. She can be heard giving audio commentary with film historian Tom Weaver on the 2007 DVD release of Attack of The 50 Foot Woman.
For further information about Attack of The Giant Leeches and other American International Pictures films, see the excellent and exhaustive book – American International Pictures – A Comprehensive Filmography (2019 McFarland) by author Rob Craig. I consider this book to be one of my most cherished film encyclopedias in my personal library. Happy viewing! (This review is cross-posted on The Plan9Crunch blog.)