A Trump Defeat Is Only the Beginning 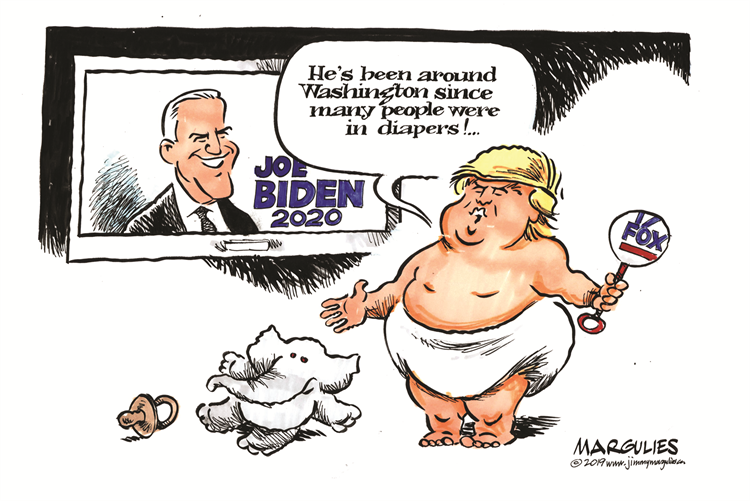 In his campaign announcement video, Joe Biden both wistfully and ominously says:

I believe history will look back on four years of this president and all he embraces as an aberrant moment in time. But if we give Donald Trump eight years in the White House, he will forever and fundamentally alter the character of this nation—who we are—and I cannot stand by and watch that happen.

The vice president’s words imply what so many of us yearn for: That Trump’s defeat will end the national nightmare and that all will be well in America again.

Alexander Burns at the New York Times annotates the transcript of Biden’s campaign announcement video with several observations, among them:

Mr. Trump’s presidency, [Biden] is saying, can be a somewhat brief, regrettable experience or a turning point in American history, and making him an aberration is more important than any other issue.

Others, while agreeing that Trump is an abominable aberration, hold the Republican Party responsible.

For example, John Long at The New Republic believes that the common refrain that “Trump is a malign interloper who swept in and ‘hijacked’ the Republican Party, leading it astray from its true, noble ideals,” is “a comforting fallacy.”

He continues, “…the current occupant of 1600 Pennsylvania Avenue is not all that ails the country’s politics. Trump is just the symptom—the Republican Party is the disease.”

• “It was the Republican Party that chose Trump…

• The truth is, what hijacked the GOP wasn’t Trump, it was the conservative movement.

• …It’s not Donald Trump who is stealing elections in North Carolina, enacting a de facto poll tax in Florida, and restricting voter registration in Tennessee.

• It’s the Republican Party’s elder statesmen such as Lindsey Graham and Chuck Grassley who are not only enabling, but also cheering on Trump’s executive power grabs and his refusal to comply with Congressional oversight.”

Burns concludes: “Saving” the GOP will mean repudiating not just Trumpism, but Reaganism. It’s something anti-Trump conservatives like Max Boot seem much more attuned to, arguing the only way forward for the country is to completely destroy the Republican Party as we vanquished Germany and Japan…”

Coincidentally – or perhaps not – today, Patti Davis, the daughter of president Reagan and Nancy Reagan, writes that what the GOP calls “Reaganism” is not at all what her father represented.

Today, in a Washington Post column addressed to “Dear Republicans,” Davis asks Republicans to stop using her father’s name to justify their silence on Trump.

She blasts Republicans for claiming her father’s legacy, at a moment in America’s history when the democracy and the Constitution to which her father pledged himself “are being degraded and chipped away at by a sneering, irreverent man who traffics in bullying and dishonesty” and who commits many other offenses – and yet, “[they] stay silent.”

“Maybe you’re frightened of Trump — that idea has been floated. I don’t quite understand what’s frightening about an overgrown child who resorts to name-calling,” Davis says. If that’s the case, she adds, “You are grown men and women. Get over it.”

In agreement with Biden’s fears of the damage already inflicted on our democracy and what four more yeas would do, Davis concludes,

Trump has been wounding our democracy for the past two years. If he is reelected for another term, it’s almost a given that America will not survive — at least not as the country the Founding Fathers envisioned, and not as the idealistic experiment they built using a Constitution designed to protect democracy and withstand tyranny.

So, to the Republican Party that holds tightly to my father’s legacy — if you are going to stand silent as America is dismantled and dismembered, as democracy is thrown onto the ash heap of yesterday, shame on you. But don’t use my father’s name on the way down.

It will take more than a presidential election to mend the damage to our democracy inflicted by Trump, but a Biden presidency will be a good beginning.