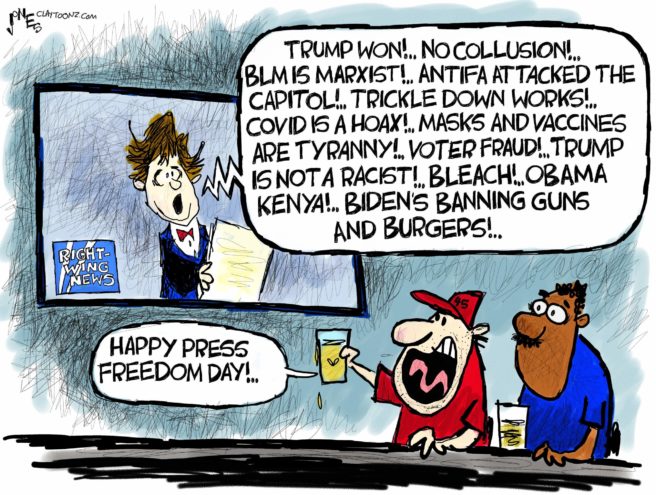 The watchdog group, the Committee to Protect Journalists, issued a report that at least 30 journalists were killed worldwide last year. Other agencies have the number as high as 50. Afghanistan and Mexico are considered the most dangerous places in the world for a journalist to work. Four journalists in Mexico were assassinated in 2020 and another was gunned down while reporting from a crime scene.

A television and radio reporter was fatally shot while on her way to work in Afghanistan last December. Iran executed a journalist for reporting on anti-government protests in 2017. Three journalists were murdered in the Philippines. Journalists face threats from criminals and corrupt governments.

Journalists aren’t just murdered. They’re thrown in prison. At least 274 journalists were imprisoned in 2020 in places like China, Turkey (which is a member of NATO and supposed to be a democracy), Egypt, Russia, Belarus, Ethiopia, Saudi Arabia, and oh yeah…the United States.

Don’t forget the murder of Washington Post reporter Jamal Khashoggi in Turkey by the government of Saudi Arabia in 2018. Our president (sic) at the time ignored it and our current president issued sanctions that were like, as Alexander Lemtov said while Lars Erickssong was punching him in Eurovision, with “silky kitty fists in marshmallow boxing gloves.”

The oppression of journalists is the legacy of Donald Trump. At least 34 were arrested globally for reporting “false news.” A lot of it was for exposing a government’s failure responding to the coronavirus pandemic. Here in the United States, the bastion of freedom, 110 journalists were arrested, most while covering protests against police violence.

Reporters Without Borders has an index for World Press Freedom where it ranks countries. Where does the United States, the champion of freedom, democracy, and liberty, land on the index for World Press Freedom? The U.S. comes in at 44. However, we are number one in the amount rednecks shouting, “Murica” and claiming we’re the greatest country in the world. Also, I think we win at hot dog eating contests (champion Joey Chestnut ate 75 hot dogs in ten minutes. He’s also a bratwurst, chicken wing, corned-beef sandwich, and poutine-eating champion. See the type of wormholes I go down for my readers?).

The thing is, kids, you can’t be a great country without press freedom. Donald Trump and Republicans want to destroy that. Even as goon networks like Fox News, One America News, and Newsmax attack freedom of the press, it’s the Constitutional guarantee of freedom of the press that allows them to make claims like the election was stolen or Joe Biden wants to ban hamburgers.

Some outlets take press freedom seriously. The Washington Post, The New York Times, and NBC each issued corrections after reporting Rudy Giuliani received advance warning from the FBI he was the target of a Russian influence campaign. He did not get those. After reporting multiple times Joe Biden wants to ban hamburgers, Fox News mumbled a correction that wasn’t a correction (it was one of those, “We’re sorry if you thought that”). Later, the leading Republican in the House of Representatives, Kevin McCarthy, went on Hannity and made the bogus claim again. Despite the network previously stating it was a lie and kinda-sorta giving a correction, Hannity did not correct McCarthy. I’m just worried they’re going to alarm Joey Chestnut that hot dogs are next.

If Republicans had their way, guys like me would be in prison, not for reporting lies but for reporting and covering what they don’t want to hear. Or, maybe even throw us in jail for making fun of them.

In Bangladesh, Kabir Kishore, a cartoonist, has been in prison for drawing about the coronavirus pandemic and posting “rumors” about the pandemic that could “cause an unrest.” Here in the U.S, we have goons like Bob Gorrell, Gary Varvel, Mike Lester, Michael Ramirez, Gary McCoy, Chip Bok, A.F. Branco, and the most notorious of the goons, Ben Garrison (if you’re a right-wing cartooning goon and I left you out, my apologies), creating cartoons daily that are based on lies, conspiracy theories, and total and utter complete bullshit. Guess how many of those guys are in prison?

None of our right-wing goose-stepping cartooning goons should be in prison for lying because we have freedom of the press. But they should recognize the freedoms they have and not abuse it. The editors putting them on their pages should stop abusing it. Also, maybe the syndicates (I’m looking at you too, Counterpoint) selling these guys should stop pushing all content based on lies. The most ironic thing is, which they don’t catch because conservatives don’t detect irony, is that it’s freedom of the press that allows them to attack the press…while being members of the press. I know. It’s surreal.

CNN’s Omar Jimenez was arrested on live TV for reporting on protests in the wake of the police murder of George Floyd. Jimenez is a black journalist so it was a twofer for the Minnesota State Police. This should not happen in the United States of America. But here in “Murica,” we just spent the past four years with a wannabe-fascist president (sic) who encouraged his white nationalist rally goers to assault the members of the press covering the hate rallies.

We need to protect journalists worldwide. Because we’re ranked 44 on press freedom, we need to start at home. A good way to start would be if “journalists” could stop attacking journalism. They can also start by stop giving TV shows to politicians’ fascist surrogates.