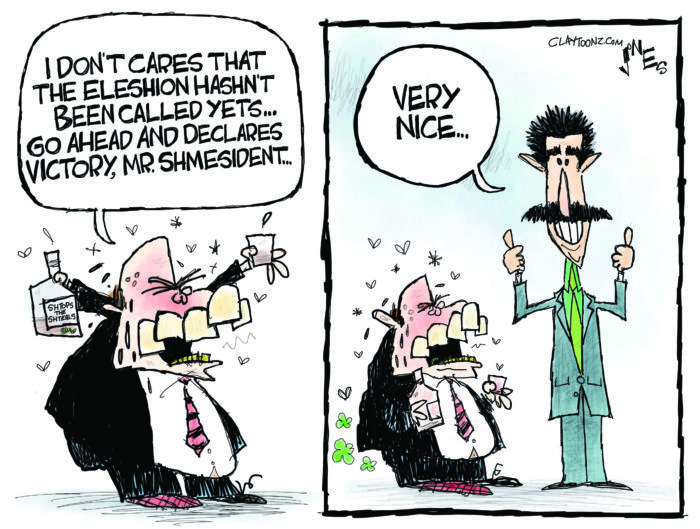 Rudy Giuliani may have been inebriated on election night 2020 when he told Donald Trump to declare victory even though no one had called the election yet. Rudy could have been totally drunk, schnockered, three sheets to the wind, blitzed, bombed, stoned, pissed, stewed, wrecked, plastered, soaked, pickled, legless, mullered, zonked, trashed, loaded, hammered, wasted, boozed-up, and wearing a lampshade on his head and Donald Trump still would have taken his advice over what the experts were telling him.

We can call Rudy a fool all day long, and we will, but who’s the bigger fool? Rudy or the guy following him?

Donald Trump was stone-cold sober when he took Rudy’s advice and declared he won the election. In fact, Donald Trump has been declaring himself the winner of the 2020 election ever since all while promoting one insane conspiracy theory after another and according to everyone who knows him, Donald Trump doesn’t drink.

I don’t want to beat up on Rudy Giuliani too much for being drunk. But it has to be pointed out because it’s relevant. Usually, on election nights, candidates want to talk to the data people, the people with numbers. The Trump Campaign’s data was just as good as that of the Biden campaign or any media outlet, but Trump didn’t want to hear from his data guy because he didn’t like what he had to say. The only person Donald Trump wanted to talk to on election night was the drunk guy, Rudy Giuliani.

Trump’s data guy was telling Trump there was no way he was going to win the election. He had the numbers. Campaigns don’t hire data people to tell them what they want to hear or lie to them. The data guy saw the votes Trump and Biden both had and he saw where the incoming votes were coming from. He knew Trump was going to lose. Drunk Rudy on the other hand told Trump to ignore the numbers and go ahead and declare victory.

That’s exactly what Donald Trump did. He declared victory even though his campaign had yet to tell him he won…and never would. In fact, all the votes were still being counted and nobody had won the election yet. None of the news outlets had called the election before Trump did on election night. In fact, no news outlets called the election until that Saturday, November 7, four days after the election, when the lead for Biden In Pennsylvania was above the recount threshold. We knew Biden was going to win for those four days, as that’s what the numbers were telling us, but there weren’t enough states called yet.

But, most states were called on election night. A few were toss-ups for several days, but Fox News called Arizona for Joe Biden on election night. That made Jared Kushner call Rupert Murdoch directly and whine (see what I did there?) and demand that Fox News stop calling states for Biden. This is another example of Fox News not being a legitimate news outlet. In fact, the data guy for Fox News who added up the numbers and said Biden would win Arizona…was fired. Fox News fired a guy for counting the right numbers who they hired to count numbers. Fox News still called the election for Biden on November 7.

As I tweeted yesterday, I have never been drunk enough to believe Donald Trump won the election in 2020. For that matter, I didn’t get drunk enough when he “won” in 2016.

But back to Rudy, how can you tell when he’s drunk and not just being Rudy?

And finally, was he drunk or just being Rudy when he told Donald Trump to declare he won the election even though he hadn’t?

One thing I know is that each time Donald Trump lied and grifted, he wasn’t drunk. He was just being Donald Trump.