Posted on April 9, 2021
You are here: Home / Featured / With Friends like these, who needs enemas? 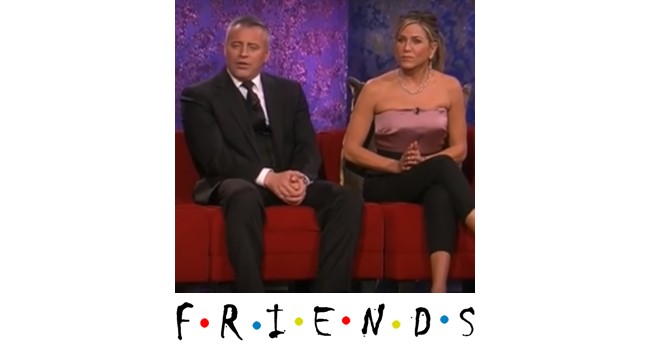 Recent buzz in the American television industry is that a Friends reunion is in the making. 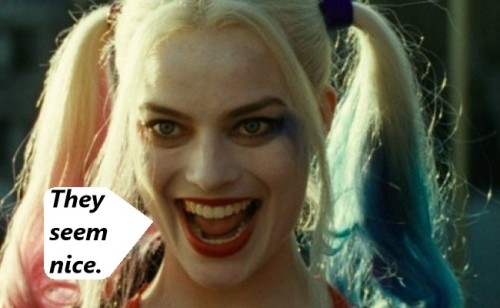 In her 13 June 2019 POPSUGAR column “Why I’ve Decided to Stop Watching Reruns of Friends — For Good”, Rayna Rossitto writes, “Lately I’ve found myself struggling to enjoy the show, and instead of reveling in the nostalgia, I focus on its problematic elements, questioning how a storyline filled with blatant sexism, body-shaming, and homophobia could be heralded as the best of its time.”

Here is a screenshot from a 29 August 2019 BuzzFeed News column by Scaachi Koul: 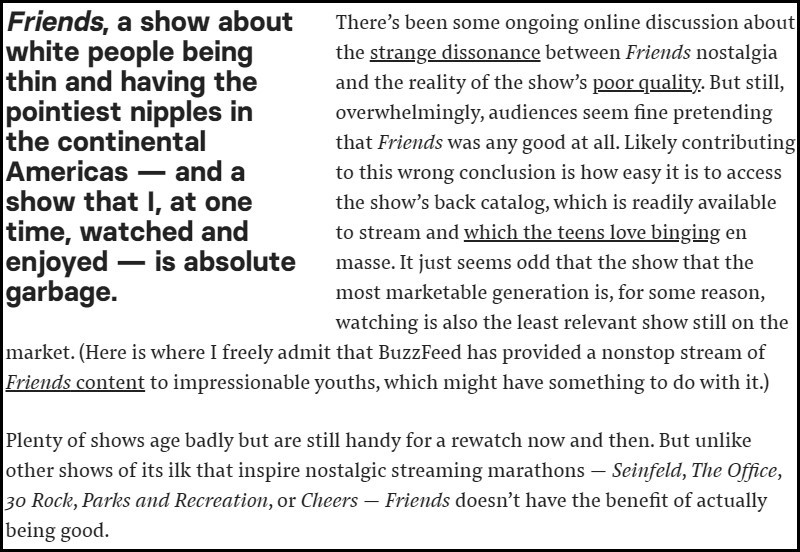 In her 21 February 2020 column “Central jerk: All the reasons why ‘Friends’ is problematic AF”, Daisy Webb has this to say about Friends:

“It appears a new generation of viewers has discovered the show thanks to Netflix. And let’s just say, they’re less than impressed. Numerous millennials have taken to Twitter to claim the show is sexist, homophobic, and transphobic, not to mention nonchalant when it comes to sexual assault. Let’s reflect by taking a look at some of the most offensive moments in Friends’s history.”

Here is the first offensive Friends moment that Webb cites:

In her 16 May 2020 column for the British magazine The Edge, Maddie Lock elaborates as to why Friends is a show that should not be celebrated:

“Though Friends is widely loved and celebrated by much of our generation, it’s time to question why we allow such questionable shows to remain our favourite Netflix binge series. From toxic masculinity to homophobia, racism to ableism, Friends is a harmful show that we shouldn’t continue to praise . . . it encourages us to laugh at, and celebrate, racial stereotypes, toxic masculinity, and homophobia. . . Overall, Friends is just one of those shows that needs to be left in the past. Yes, it may have paved the way for friendship group based sitcoms, however it’s not as if the sitcoms to follow haven’t copied similar questionable narratives and themes. The only way Friends can be seen as acceptable to watch is if its fans know that these characters should be condemned, not celebrated.”

In her 22 January 2018 column for The Independent, Ilana Kaplan summarizes why Friends is a bad show: 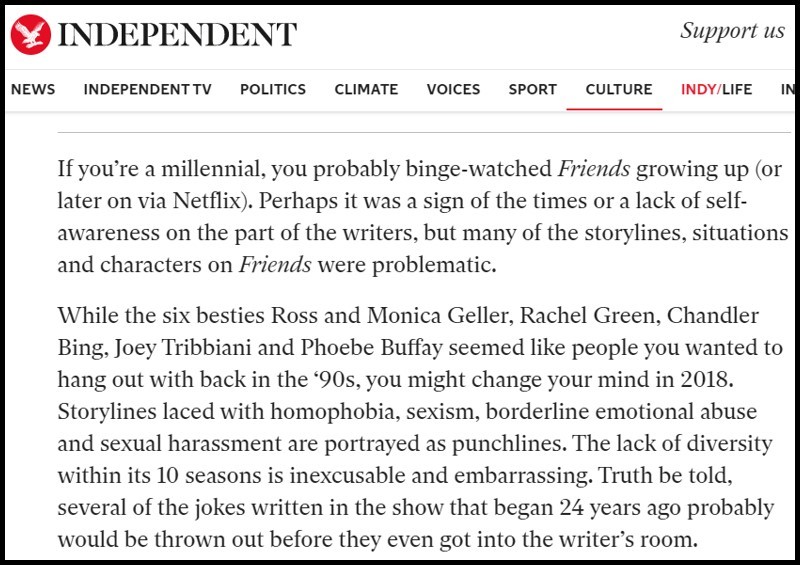 “Like a bajillion other people, I watched the show off and on throughout its 10-season run, and I even liked some of the episodes, appreciated the chemistry of the cast, thought the writing was strong, and found moments of its comedic timing to be absolutely impeccable. And like at least many of the black folks I know, especially those of us who actually live in New York, I struggled with how to enjoy a show in which my experience as a black twenty-something New Yorker was pretty much erased entirely. As an ensemble cast of semi-ambitious young white people trying to make it in New York City, Rachel and Ross and Phoebe and Joey and Monica and Chandler were ultimately able to live in delusion and thrive in ways that black and brown people never could or can. In doing so, they also perpetuated a racist myth that doubles as a white intellectual fantasy.”

In short, Friends ought not to be revived in any way. That much is obvious to people looking back at the show with a critical view. Sure, some of the show’s cast-members won Emmy awards for their roles in the show. That just illustrates how unawake many Americans were (and still are) about the show’s flaws.

See also: For Everyone Who Secretly Hates “Friends”