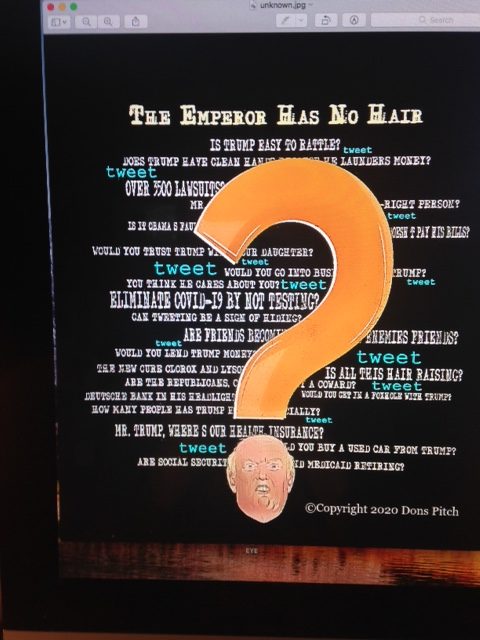 Why are there so many unanswered questions about Trump’s background?
Why is Trump fighting so hard to hold on to the presidency?
Why did Trump say during the campaign “If I lose, I might have to leave the country?
Why wasn’t that question considered to be as relevant as any issue?
Why was Trump considered a good businessman when he went bankrupt five times?
Why was Trump considered a good businessman when he failed in almost every business venture he ventured in?
Why was Trump trusted after lying 30,000 plus times during his presidency?
why did Trump give classified information to the Russians?
Why has the media’s appetite for his garbage like having a tapeworm hungry for more and more?
Why did Trump surround himself with mostly sycophants who ended up leaving or violating the law?
Why have significant numbers of americans supported him under very questionable circumstances?

Some answers to the above questions from an 88 year old who loves America. And will provide some thoughtful answers to those who like himself are puzzling over the future of this wonderful country.

I believe in the beginning Trump was as surprised as anyone at the response he received from millions of people around the country. Although he lost the popular vote, he prevailed with the Electoral College. He touched a nerve with many unhappy people and parlayed that into the presidency. Surprisingly, he became a cult-like leader impacting Republican politicians both local and national.

Trump was so extreme, yet they hung on his every word as they became his tool in manipulating the message.

This new-found power was going to be his ticket to (“A get out of jail free) pass. As President he was next to untouchable. All he had to do now was to get elected for another four years and he’ll be at Mount Rushmore, as he has already stated. Of course, the Nobel Peace Prize was his for the taking.

Trump was now ventriloquist and the media a room full of puppets. The alternative facts flowed like the river in a storm.

When Trump started his campaign for president in 2015, a number of the major media were hanging by their finger nails to survive. See how prosperous they are now. Think about how journalists, attorneys, publishers and a host of others used Trump in one form or another to become media stars, authors and publishers of books and spokespeople, all about Trump. Some TV stations seemingly became extensions of Book TV. It was so predictable to see the panels of people congratulate each other on their newly published Number one exposé.

Some of these books are quite revealing and important. However, on balance I believe this is where the media came up short. In any major situation like the Trump presidency and the controversy surrounding it, it should be critically important to understand the “whys” of his behavior. Why did he say what he did? Why did he take the actions he did? Having those answers can give us some insights in responding to what’s been happening.

Although the media has covered this to a degree, they haven’t been diligent enough to tie his past behavior to his current behavior.

How could he avoid the consequences of all his past illegal activities? As president, he had leverage. Since he had the bully pulpit, he could manage and control news to his advantage. Thank you George Steinbrenner who told him to divert attention, be outrageous. That’s the secret of getting on page one. Otherwise you’ll be on the back page. Throw as much garbage at the wall as you can. Test the waters. Low and behold, it worked better than he expected.

The media fell in line right away. And he touched the nerve of millions of unhappy people across America. His antenna was up and his message went right into their living rooms. He made promises he couldn’t fulfill but that didn’t matter. He was giving that group a voice. They would die for him. In fact, they would destroy a Democracy, give up their freedoms and follow him to the ends of the earth.

The plan was in place. He’ll become President again and he’ll never have to worry about his legal issues again. Who’s going to indict him? The best laid plans of mice and man. Unfortunately, the mouse turned into a rat. He lost the election. In spite of his desperate claims and maneuvers, his loss is still a loss.

His extreme reactions to his loss are only examples of his fear of what’s ahead. It’s difficult to imagine anyone, including Trump carrying on the way he has. Unless he’s completely lost his marbles. That doesn’t seem likely. This pattern is not new. Maybe a little more extreme now, but consistent with his outrageous comments and behavior since becoming President.

Where is the media? Pussycats? Pushovers? Avoiding the truth, like the Republicans in Congress to maintain power and influence?

Why? I’ve given my two cents for what it’s worth. Let the media and Democrats fill in the empty blanks. If they do their jobs maybe we’ll all be better off.