Posted on February 3, 2023
You are here: Home / Featured / Why news media should report that a former president wants to ‘terminate’ the Constitution

Regardless of the veracity of the assertion credited to Hitler’s Minister of Propaganda, “Repeat a lie often enough and it becomes the truth,” research suggests that repetition can lead to people believing a lie. The power of repetition is why news organizations should avoid repeating the lie in a headline offering a fact check.

From 2016-2020, news organizations engaged in debunking falsehoods at an incredible rate. As Federico Finchelstein wrote in June 2020, “Fact-checking President Trump is a full-time job.”

He’s no longer president, but he has declared a 2024 candidacy, and some pollsters have anointed him as the GOP presidential candidate.

That brings me to Donald Trump’s assertion on TruthSocial on Saturday: 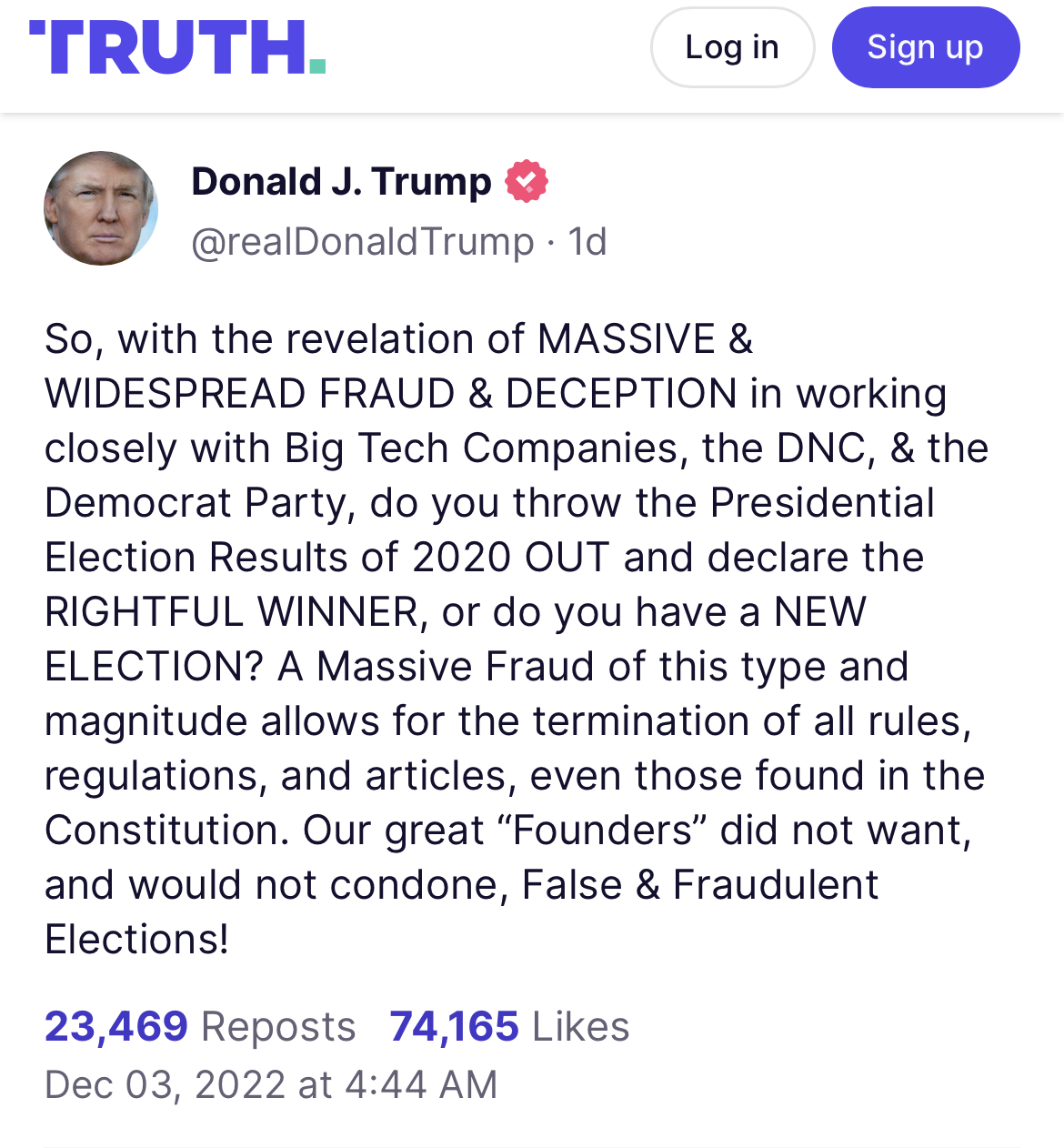 The nugget at issue — terminating the Constitution — rests on a lie, one Trump has repeated (probably daily) for more than two years: that the 2020 election was somehow fraudulent because he lost.

“A Massive Fraud of this type and magnitude allows for the termination of all … articles, even those found in the Constitution.”

That’s what the January 6th insurrection was about: terminating the will of the voters by preventing the peaceful transfer of power, a transfer outlined in the Constitution.

Donald Trump believes we should terminate “all rules, regulations and articles, even those found in the Constitution” to overturn the 2020 election. That was his view on 1/6 and remains his view today. No honest person can now deny that Trump is an enemy of the Constitution.

On that day, 06 January 2021, Trump’s legal team had lost 61 of 62 attempts to overturn election results. In the one win, a judge ruled that Pennsylvania voters had only three days to confirm that they had cast a legal mailed ballot.

Yet this is his refrain: the election was rigged, fraudulent. It’s a lie that administration officials and campaign advisers knew then. And told him.

Mainstream news skipped the Trump call to terminate the Constitution, in the main. On Saturday, there was only CNN:

Kudos to @CNN for getting it right.https://t.co/OHIOW6erRC

[T]here are times when attention must be paid — if only to lay down a marker, if only (grandiose as this may sound) so historians will understand: This went too far. This cannot be allowed to stand without being denounced.

I might have made this choice in the aftermath of Trump’s dinner with antisemites and Nazi sympathizers Ye (formerly known as Kanye West) and Nick Fuentes. Who could have imagined, in the time before Trump, that a former president of the United States and declared candidate for president would so sully himself and the office?

But I am moved, now, to write about Trump’s latest post, on his Truth Social network, because it is at least equally dangerous and even more insidious.

Let me rewrite this for you: Most Republicans Refuse to Rebuke Trump’s Call for ‘Termination’ of Constitution https://t.co/TZw2UQz5Pa

As Dan Froomkin notes, the New York Times account normalized Trump’s outburst. It also buried the inconvenient fact that most Republicans do not denounce anything Trump says or does. The Washington Post took a similar approach: “GOP lawmakers largely silent after Trump suggests ‘termination’ of Constitution.”

1. Had dinner with a notorious white supremacist and anti-semite

3. Called for the Constitution to be "terminated"

As Marcus and Legum note, Trump began the week dining with “antisemites and Nazi sympathizers.” The New York Times focused on half of the pair: “Trump’s Latest Dinner Guest: Nick Fuentes, White Supremacist.”

From amplifying his every utterance to turning a lukewarm shoulder to clearly seditious – treasonous – rhetoric: that’s how the American news media have acted. In so doing, they have failed the public at almost every turn.

The full, screen captured, TruthSocial post needs to be front and center on news organization websites. Voters who are not die hard political junkies must know the extent of Trump’s depravity. The role of the fourth estate is to speak truth to power. Before it’s too late.