Posted on May 3, 2021
You are here: Home / Health / coronavirus / White House Chief of Staff Meadows: ‘We are not going to control the pandemic’ 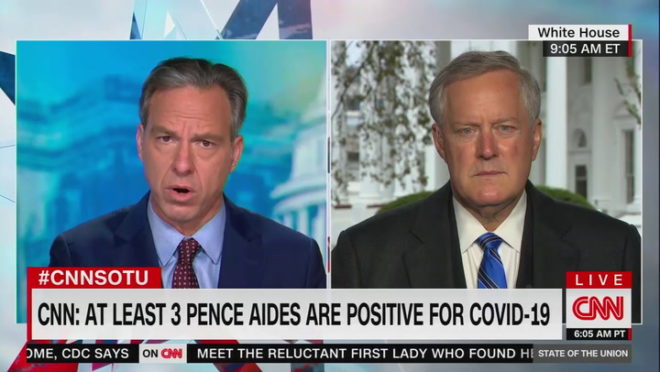 It sounds as if the Trump administration has given up on trying to control the coronavirus.

White House Chief of Staff Mark Meadows, in what is being seen as a disastrous interview with CNN’s Jake Tapper, said: “We are not going to control the pandemic just at the time when the cornavirus is setting records as it surges across the United States.

Here’s what he said:

White House chief of staff Mark Meadows said Sunday that the US is “not going to control” the coronavirus pandemic, as cases surge across the country and nearly 225,000 Americans have died from the virus.

The comments from President Donald Trump’s chief of staff come as coronavirus cases surge across the US and the administration continues to consistently disregard advice from government health experts to wear masks, social distance and avoid large gatherings as a way to curb the spread of the virus. The White House is also facing a potential second outbreak of the virus after at least five people in Pence’s inner circle have tested positive in recent days, according to a source familiar with the situation.

This coupled with the reportedly not good 60 Minutes interview with Donald Trump suggest this may not be a week when Trump’s polls will start to soar.

Dear Mark Meadows……When your boss calls the CNN control room and demands they end an interview with you, things have not gone well??

Biden statement: "They've given up on their basic duty to protect the American people. This wasn't a slip by Meadows, it was a candid acknowledgement of what President Trump's strategy has clearly been from the beginning of this crisis: to wave the white flag of defeat."

Trump has finally adopted #VirusSurrenderMonkeys as a campaign slogan. Shame if it trended to #1

Biden statement: "They've given up on their basic duty to protect the American people. This wasn't a slip by Meadows, it was a candid acknowledgement of what President Trump's strategy has clearly been from the beginning of this crisis: to wave the white flag of defeat."

“We’re not going to control the virus.” ~Mark Meadows

By the end of this pandemic, it will be obvious to doctors, epidemiologists, and historians that Trump’s refusal to lead on the pandemic cost more American lives than Vietnam or World War I.

This is the White House, in charge of keeping us safe.

As I watch this clip I see a historic surrender by the Republican party on a matter of national security and economic survival, and a slip of the mask for the GOP as a minority party, admitting in public speech that it is unwilling to protect the nation as a whole— and moving on. https://t.co/7vSDmnCF3Q

Who's replacing Meadows, this week?
Meadows says 'we're not going to control the pandemic' in heated interviewhttps://t.co/6mY3xQNuzc