Posted on October 14, 2020
You are here: Home / Featured / WHENEVER TRUMP FLAPS HIS YAP, HE MAKES THE BEST CASE FOR BIDEN 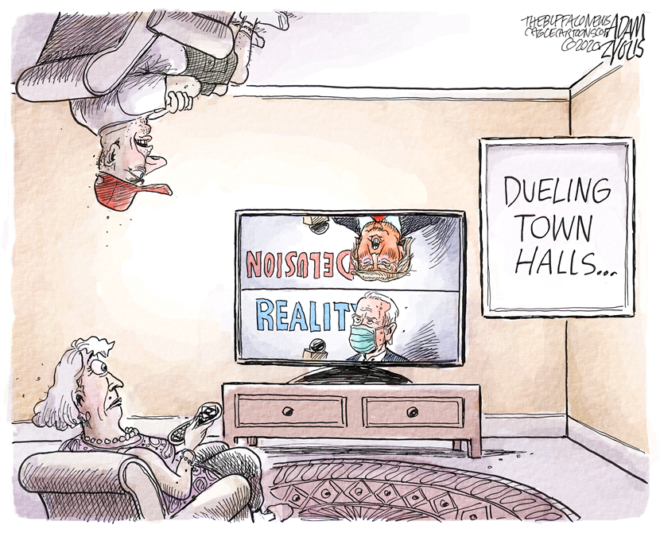 If Donald Trump was a movie scene, he’d be the fiery train wreck in “The Fugitive,” and U.S. Marshal Tommy Lee Jones would be cruising through the carnage saying, “My my my. What. A. Mess.”

The dueling “town halls” Thursday night were enough to make one’s head spin. On ABC, where Joe Biden resided, you had decency and sanity. On NBC, had demagoguery and sociopathology. Choose the America you want, folks, because the contrast could not be starker.

For instance, here’s how Biden talked about how masks curb the spread of the deadly virus: “When a president doesn’t wear a mask, or makes fun of folks, like me, when I was wearing a mask for a long time, then people say, ‘well, it mustn’t be that important.’… It is estimated by the University of Washington that if, in fact, we wore masks, we could save, between now and the end of the year, 100,000 lives.”

But here’s what Trump said: “I’m OK with masks…But just the other day, they came out with a statement that 85 percent of the people that wear masks catch [coronavirus]. That’s what I heard, that’s what I saw.”

There’s less than zero evidence that 85 percent of mask-wearer get COVID-19. Anyone who spends five seconds parsing that fake statistic knows it’s laughable. What Trump shared with viewers – and shared with his rally saps earlier yesterday – was a blatant lie popularized by Tucker Carlson on Fox News.

What a shame that NBC, the network that saved Trump from financial ruin by airing his celebrity game show, decided this week to indulge him again, giving him free air time to dump his stinking rhetorical detritus on America’s lawn.

Hold your nose, because here we go:

– He again refused to say whether he had tested positive for Covid prior to sharing a debate stage with Biden and delusionally lauded his greatness on handling the pandemic.

– He refused to condemn the QAnon conspiracy freaks (who believe there’s an international cult of celebrities and Democrats who engage in child sex-trafficking). Even though federal law enforcement authorities are closely watching them, Trump claimed he knew nothing about them. Then he changed his mind and said they’re “very strongly against pedophilia, and I agree with that.”

– He didn’t think it was wrong to falsely tell his Twitter followers that Biden had conspired with Navy SEALS to cover up the fake death of Bin Laden. “That was a retweet. I’ll put it out there. People can decide for themselves. I don’t take a position,” Trump said.

– He confirmed he’s personally $400 million in debt, but said it was a small amount of money (“a peanut”), and he refused to name is creditors because he claims not to know who they are. When he was asked whether his creditors are foreign sources or foreign entities, he said: “Not that I know of, but I will probably, because it’s so easy to solve, and if you’d like to do, I will let you know.” Whatever that means.

– He recycled one of his pet lies about purported mail ballot fraud: “When I see thousands of ballots dumped in a garbage can, and they happen to have my name on it? I’m not happy about that.” Thanks to Trump’s non-stop blather, NBC’s viewers never heard the truth. The episode Trump was referring to involved nine trashed ballots – not “thousands” – in one Pennsylvania county, where a temporary seasonal worker screwed up and was fired after three days on the job.

– He recycled the lie that he and his servile Republicans “are always protecting people with preexisting conditions, and I can’t say that more strongly. In reality, he’s working to kill Obamacare in the U.S. Supreme Court, thereby removing all statutory protections for people with preexisting conditions, and he still has no plan to replace the 10-year-old law that’s now widely popular.

And so on. Shame on NBC for indulging a guy who fled like a coward when offered a second opportunity to debate Biden. If he wants to lie with impunity, let him buy ads. But the good news is with less than 2 weeks on the clock, he said virtually nothing that’s likely to bedazzle the independents, seniors, and college-educated suburbanites he so desperately needs.

Ultimately, the contrast boiled down to this:

On NBC, Trump attacked Biden, Pelosi, “the radical left,” Obama, Antifa, his own FBI director, and the Gold Star families who “maybe” gave him COVID-19.

While pondering the next four years, which tone strikes you as more attractive?