The condescending attitude that some Democrats have toward the GOP is laughable considering the Democrats’ woes. One would have to be stuck in a Democrat echo chamber in order not to see the trouble that the Democratic Party is in during the current presidential contest.

For example, in a previous post, this writer talks about Democrats awakening to the fact that Hillary Clinton is dishonest and untrustworthy. One reader of that post responded this way: “So, Democrats by a wide margin don’t think she’s honest and trustworthy, but she’s still leading in the polls. What does that say about Democrats?”

Indeed, what does that say about Democrats? Perhaps it says that Democrats are fond of weasels. After all, weasels tend to support corrruption.

The Democratic Party greatly erred by promoting the idea that Hillary would be a shoo-in for being elected POTUS. Saturday Night Live is still promoting that error. Come Election Night 2016, SNL actress Kate McKinnon may be getting drunk for real. 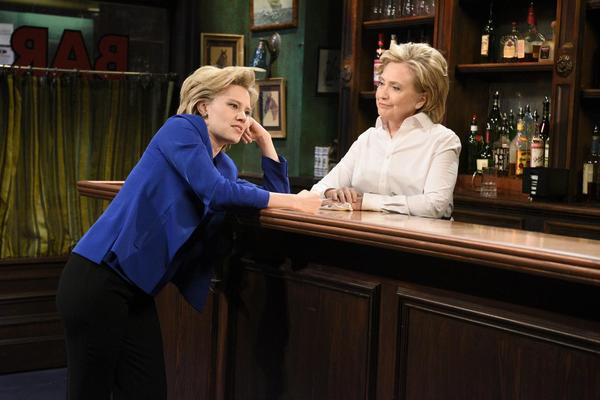 Instead of calling her Madame Secretary, perhaps one should call Hillary Madame Flip-Flop. Here is an excerpt from the Wall Street Journal commentary Hillary Trades Places With Clinton.

On Wednesday President Obama’s former Secretary of State came out against her former boss’s Pacific trade agreement only two days after it was completed. . . Mrs. Clinton previously called the Pacific pact the “gold standard in trade agreements,” and as recently as her memoir in 2014 she praised it as “important for American workers who would benefit from competing on a more level playing field.” At State she took a leading role in promoting the pact and in January 2013 said that “I think the Trans-Pacific Partnership is one way that could really enhance our relationship” with Japan. She supported Nafta and she backed the trade deal with South Korea, but now she’s had a change of heart—or should we say soul. Perhaps Mrs. Clinton is anticipating Joe Biden getting into the race and wants to carve out space to his populist left. But she really must think voters are dunces.

Are the other Democrat presidential contenders any better than Hillary? No, not really.

In fairness, it should be noted that Bernie Sanders comes across as being sincere and much more honest than Hillary. He has an authenticity that Hillary lacks. Yet, Sanders is the kind of Socialist who promises people a non-existing free lunch. His attempt to pull the nation farther left is a recipe for losing a general presidential election.

As for the other Democrat presidential contenders . . . Who are they again? Not even Saturday Night Live knows.

Left-wing extremists may be laughing at the current GOP presidential field now. However, come Election Night 2016, it is likely that Republicans will have the last laugh, and this writer will be laughing with them.