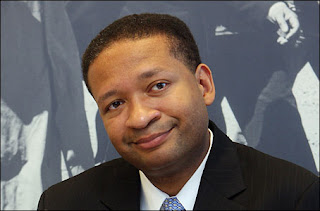 As many of you know, one of my “things” is bringing more minorities into the GOP. Believing in the free market system, Democracy, and freedom, and being against the over reaching government, government intrusion in our lives, and being against being over taxed and over regulated is for EVERYONE, regardless of color or religion. I also believe that minority communities are better served by having a voice in both parties. So, I am pleased that Artur Davis, Congressman from Alabama since 2002, is changing his party status from Democrat to Republican. He was a Senior Whip for the caucus, co-chair the New Democrat Coalition and headed up the Southern region for the Democrat Congressional Campaign Committee. He is giving up a lot for what he believes in. Here he explains why: (emphasis mine)

But parties change. As I told a reporter last week, this is not Bill Clinton’s Democratic Party (and he knows that even if he can’t say it). If you have read this blog, and taken the time to look for a theme in the thousands of words (or free opposition research) contained in it, you see the imperfect musings of a voter who describes growth as a deeper problem than exaggerated inequality; who wants to radically reform the way we educate our children; who despises identity politics and the practice of speaking for groups and not one national interest; who knows that our current course on entitlements will eventually break our solvency and cause us to break promises to our most vulnerable—that is, if we don’t start the hard work of fixing it.

On the specifics, I have regularly criticized an agenda that would punish businesses and job creators with more taxes just as they are trying to thrive again. I have taken issue with an administration that has lapsed into a bloc by bloc appeal to group grievances when the country is already too fractured: frankly, the symbolism of Barack Obama winning has not given us the substance of a united country. You have also seen me write that faith institutions should not be compelled to violate their teachings because faith is a freedom, too. You’ve read that in my view, the law can’t continue to favor one race over another in offering hard-earned slots in colleges: America has changed, and we are now diverse enough that we don’t need to accommodate a racial spoils system. And you know from these pages that I still think the way we have gone about mending the flaws in our healthcare system is the wrong way—it goes further than we need and costs more than we can bear.

Taken together, these are hardly the enthusiasms of a Democrat circa 2012, and they wouldn’t be defensible in a Democratic primary. But they are the thoughts and values of ten years of learning, and seeing things I once thought were true fall into disarray. So, if I were to leave the sidelines, it would be as a member of the Republican Party that is fighting the drift in this country in a way that comes closest to my way of thinking: wearing a Democratic label no longer matches what I know about my country and its possibilities.

Related, you might enjoy my post “Black History, My History, And Arms Open Wide,” which explains why I welcome Davis “Home” to the GOP, and a bit of my history.