Posted on January 23, 2023
You are here: Home / Health / Voting on Cultural Issues Instead of Economic needs 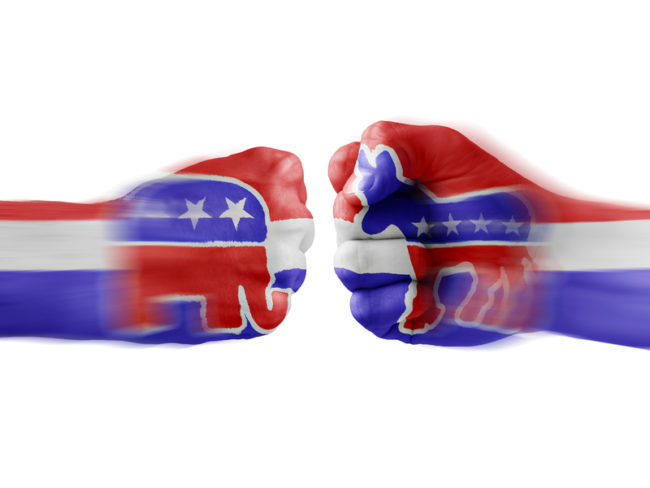 An attendee’s sign reading “Vote” is pictured during a campaign event for Nevada Governor Steve Sisolak and US Senator Catherine Cortez Masto with former US President Barack Obama, ahead of the US midterm elections in Las Vegas, Nevada, on November 1, 2022. (Photo by Ronda Churchill / AFP) (Photo by RONDA CHURCHILL/AFP via Getty Images)[/caption]Overall, Republican dominated states in America have worse life expectancies and quality of life than states where Democrats prevail. With the quality of life and survival in Red states considerably lagging the Blue states, why do their citizens consistently vote for candidates who do not support their needs. It is because the GOP politicians tend to focus on cultural issues rather than quality of life. In this current election however, they have pummeled the Democrats on some quality of life issues, such as crime and inflation. Though there has indeed been a spike in crime over the last five years, it started during President Trump’s time in office and still has not come close to the peak that was present thirty years ago.

According to the World Bank, in 1991, the homicide rate in the US was 9.71 per 100,000. There was then a fairly steady decline in homicides until 2015 and 2016, when the rates turned around, peaking at 6.52 in 2020, Trump’s last year in office. That was almost a 29% increase prior to Biden’s presidency. In 2021, Biden’s first year in office, violent crime statistics in the US were basically unchanged from the year before according to the DOJ. Statistics are not available for the full year 2022 currently, but it appears that homicide rates are decreasing from the previous year, though not total crime. In 2021, four of the five states with the most homicides were Red states, with Texas far in the lead, followed by North Carolina and Ohio.

So-called deaths of despair, which include drug overdoses, alcohol related deaths and suicides are far more frequent in Red states than Blue ones. In 2020, the top two states from drug overdoses were Missouri and West Virginia. Suicide rates were highest in Wyoming and Alaska followed by Montana and New Mexico. In 2021, alcoholism was most prevalent in Wisconsin, North Dakota, Iowa, Nebraska and Minnesota. According to the CDC, the states with the lowest life expectancy was mainly in the South, prior to the onset of Covid. With Covid, the average life expectancy for the ten lowest states was 73.6 years in 2020, again mainly in the South, compared to the national average of 77 years. The ten states with the longest life expectancy were all Blue, including New York, New Jersey, Colorado, and states from New England and the West Coast.

Obviously, the deaths of despair contributed to the diminished lifespan for people in some of the Red states, but poor health care is a significant factor. People tend not to see physicians regularly and do not get the preventative care that is necessary. This is because medical care is not easily accessible or it is not affordable. The highest rates of poverty are seen in the Red states, with nine of the top ten led by Mississippi and Louisiana.

Yet with all the poverty and health care problems of their constituents, Republican politicians have fought against expanding Medicaid in many states because it was initiated by Obama and is called Obamacare- the Affordable Care Act. Senate campaign chairman Rick Scott and other Republicans have spoken of reducing Medicare and Medicaid benefits if the GOP controls Congress, possibly raising the age for Medicare to 70. Likewise, the Republicans would like to raise the age when Social Security benefits can be obtained to 70. They say they are concerned about the Federal deficit, yet they cut the tax rate for the wealthy during the Trump years and refuse to increase taxes on the wealthy.

These are but a few of the ways that the Republicans are willing to harm ordinary or poor Americans in order to cater to the rich people who fund their campaigns. They lie about the Democratic motives and focus on cultural issues to obtain the votes of the electorate in their states who they are more than willing to ignore once in office and take advantage of them. People in the Red states have to learn which politicians are out to help them and those who really don’t care. Democratic legislation favors the middle classes and the poor while the Republicans constantly favor the wealthy. Education, gay marriage and similar issues are used by Republicans to distract voters from their plans to cut Medicare, Medicaid and Social Security which would have a devastating effect on American society.