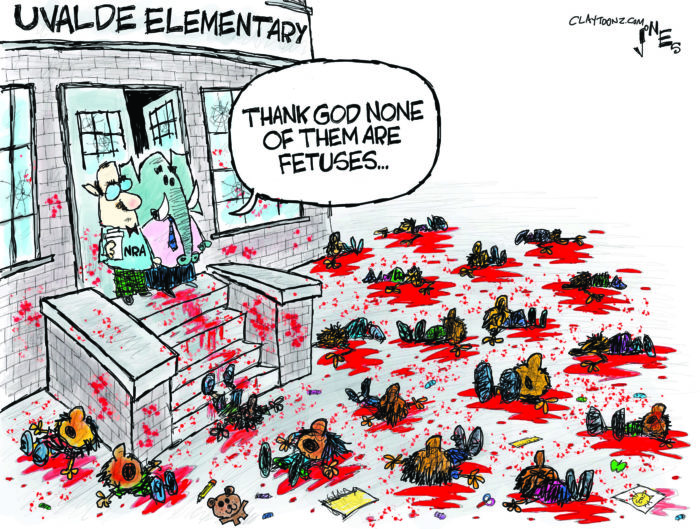 What are the odds that on the same day I receive a journalism award from a human rights organization, the Robert F. Kennedy Human Rights organization, for a cartoon on school shootings that’s there’s another school shooting? In this country where politicians refuse to do anything to stop mass shootings and end the easy accessibility of assault rifles designed to kill as many people in the fastest way possible, pretty good. We don’t live in Belgium.

I had one of the best days of my career yesterday. After 32 years of being a professional cartoonist, I finally won my first national award. I didn’t just win any award. I won one of the big ones. And, it’s a journalism award focused on human rights, the issues closest to my heart, the issues I believe are the most important in this nation. Immigration is not the greatest threat to this nation. So while I was having the best day of my career, a lot of people in Texas were having the worst day of their lives. Nineteen children lost their lives. Parents lost their babies. Two teachers were also killed.

I received a congratulatory message from Ann Telnaes yesterday, one of the best cartoonists in our business and a person I have the highest respect for. I received several congrats from friends and colleagues, but Ann’s stood out because she apologized for congratulating me an “hour late,” as she was following the tragedy in Texas. Her message brought me back down to Earth a little bit and was a reminder that I still have to focus on what got me that award. Awards are nice, but it’d be nicer if 19 children didn’t die yesterday from something we could have prevented. My news was not the most important thing to focus on yesterday.

Another friend told me it was a shame that the shooting happened while the RFK ceremony was underway.

But, this is America. Good luck picking a day where there’s not a mass shooting.

Instead of fleeing Texas in time of trouble as is his habit, Ted Cruz offered condolences, then expressed anger at anyone who might suggest we go after the weapons that were made to kill children. Texas Governor Greg Abbott expressed confusion as to why this stuff happens. This weekend, they will both be speaking at an NRA convention in the state of…you guessed it…Texas. This is why this shit keeps happening. This is why children continue to die in their classrooms.

The person who killed these children purchased two assault rifles after turning 18 when he can’t buy a beer. Republicans are more interested in speaking at an NRA convention and scooping up big cash donations than preventing a kid from buying assault rifles to kill other kids.

These children were all in the same 4th-grade class. The shooter barricaded himself with them in their class. He killed 19 of the students and two teachers. They didn’t have a chance. This weekend, Ted and Greg are going to barricade themselves with gun humpers who will give them money to save guns from commie liberals, who want to end mass shootings. If they do bring up this shooting at the conference, I’m sure they’ll blame liberals. Hell, they don’t even want to blame racism for the Buffalo shooting.

Last night, I reshared my cartoon on mass shootings that was in my entry for the RFK Award. At this point, it has nearly 7,000 shares, a lot more from when I originally posted it in 2021. The bad thing is, I can’t remember which school shooting it was about. I was also being screamed at by people with Pepe the Frog as their profile pictures for posting the cartoon. Cartoons on mass shootings disturb gun humpers more than mass shootings do. I find thoughts and prayers more outraging as responses to these incidents.