USA TODAY Comes Out For Impeachment There it is, just hot off the pixel presses:

The president’s Ukraine shakedown and stonewalling are too serious for the House to ignore: Our view  —  “Put your own narrow interests ahead of the nation’s, flout the law, violate the trust given to you by the American people and recklessly disregard the oath of office, and you risk losing your job.”

USA TODAY’s Editorial Board wrote those words two decades ago when it endorsed the impeachment of President Bill Clinton, a Democrat. Now, in graver circumstances with America’s system of checks and balances at stake, they apply to another president facing impeachment, Republican Donald Trump.…

Unless public sentiment shifts sharply in the days and weeks ahead, that is the likely outcome of this process — impeachment by the Democratic-controlled House of Representatives followed by acquittal in the GOP-controlled Senate. So why bother? Because Trump’s egregious transgressions and stonewalling have given the House little choice but to press ahead with the most severe sanction at its disposal.

It’s called “Country First” and was the keynote of John McCain’s 2008 presidential run.

But, as we will increasingly find, as GOP Clinton statements come back to haunt them, it only matters if it isn’t a Republican doing the law-breaking.

All of the chest-pounding about “the rule of law” and suchlike were only for Bill Clinton and never for George Bush and Dick Cheney’s Nuremberg Trials war crimes. And now that Lindsey Graham has graduated from House Impeachment manager to Senator from South Carolina and inheritor of the mantle of mendacity formerly held by his predecessor, Strom Thurmond … well, you can fill in the blanks.

Forgotten: Donald Trump’s 2016 endorsers
(and yes, the KGB is now the GRU but it’s the KGB)

One major and middle-of-the-road mainstream paper has come out forcefully for impeachment (and, implicitly, removal) and has begged the GOPs to fulfill their oath of office, but, as the twitter hashtag goes:

An assay of a twitter thread by John Cleese asking what is so difficult about understanding impeachment? produced paroxysms of dissimulation and prevarication that would do an intervened alcoholic proud. 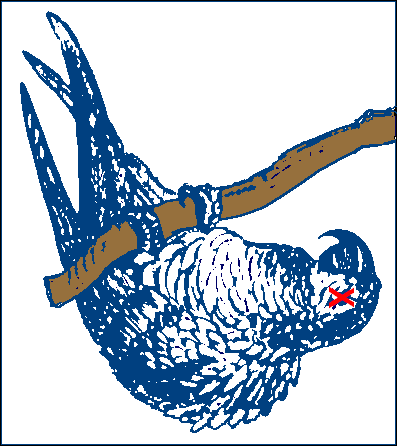 A Norwegian Blue parrot pining for the fjords.

We may not be the brightest species in the universe, but, I guarantee you, when it comes to rationalization and self-deception, the entire galaxy stands in awe of us.

I will stand for the Constitution and the Rule of Law with every fiber of my being in the dark times ahead, but I do it out of duty and patriotism, and not, by any means, the slightest hope that virtue will prevail and that the GOPs will decide that America is more important than doing whatever Rush Limbaugh and Faux Nooz tell them to do.

Why? Because I am an empiricist and not an ideologue.

Which gives me an advantage, I think.

Because facts are stubborn things.