Posted on October 9, 2021
You are here: Home / Book Reviews / Uncle Will and the Fitzgerald Curse a rare part of John D. Fitzgerald’s western trilogy 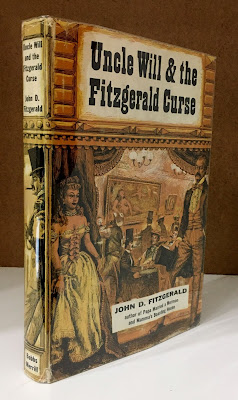 Review and musings by Doug Gibson

The late Utah-born author John D. Fitzgerald is certainly not a household name, but many of his books, primarily the youth fiction “The Great Brain” series, are both recalled and loved by I’d wager millions. In the 1950’s, long before he started “The Great Brain” books, he wrote “Papa Married a Mormon,” a major best seller. (Our review is here). That novel had several printings. A sequel, “Mamma’s Boarding House,” also sold well. Both are easily accessible today, “Papa Married a Mormon” can be bought for within $20, “Mama’s Boarding House” is a bit more expensive, usually. Fitzgerald wrote a third novel, “Uncle Will and the Fitzgerald Curse,” and I promise to get to that as soon as I’ve finished my beginning musings.

The above-mentioned series and novels relate the lives of the Fitzgerald family in a fictional Utah town named Adenville. The time period runs from the late 19th century into the first dozen or so years of the 20th century. Close to Adenville, in southern Utah, is a mining town later turned ghost town named Silverlode. Tom D. Fitzgerald is Papa and the Mormon he married is Tena Nielsen Fitzgerald. Children of the Fitzgeralds who are prominent in the books include John D., (the author of the novels) and his older brothers Tom D. and Sweyn D.

Fitzgerald is a marvelous storyteller. The books are mostly arranged in chapters that tell a distinct tale from beginning to end. The author manages to do this while keeping the flow of the novel. There are minor inconsistencies of time frame and character events but they are subtle and do not distract from an enjoyable reading experience.

Fitzgerald’s writing style has been compared to Mark Twain, Nathaniel Hawthorne, John Steinbeck and Harper Lee. He vividly describes the regional western era of the state he grew up in, with idealized, often-moralistic depictions of sheriffs, newspapermen, gamblers, saloon keepers, Latter-day Saint bishops, Catholic priests, Protestant ministers, teachers, mothers, dads, children, merchants, gunslingers, con men, miners, team of horses drivers, bigots, dance hall girls, Native Americans and even town drunks. Often in the chapters a negative influence in the moral tale will reform and become a positive influence within both diverse communities, Mormon, straight-laced Adenville, and the more “back-street, hell-raising” Silverlode, later represented as East Adenville. In other chapters the negative influence either dies at the hand of justice, or suffers appropriate monetary loss/comeuppance, or is sent off to jail.

While I may make no claim that Fitzgerald is the equal of Charles Dickens (there are probably only 8 or 9 writers in history his equal) I see a type of Western America “Dickensian-like” talent in Fitzgerald as he describes both the personal appearance, speech, and colorful personalities and antics of his many characters.

UNCLE WILL AND THE FITZGERALD CURSE

Time to get to the review of the above-mentioned book. It involves the life of a prominent character, Will D. Fitzgerald, Tom’s brother and uncle to the children. In “Papa Married a Mormon,” we meet this very rich owner of the White Horse Saloon and gambling hall in Silverlode. He is an agnostic and skeptic, but extremely fair and pragmatic. A longtime gambler, he worked his way across the country, earning his wealth initially through gambling, and killing several men in gun draws. He’s a positive, loved member of the family who uses his considerable intellect, wits and wealth to help resolve some crisis in the novels.

“Uncle Will and the Fitzgerald Curse” is Will’s story. A significant portion of the book is spent on Will’s childhood, in the Fitzgerald family home in Pennsylvania. Already a headstrong child, Will reacts negatively to his maternal grandfather moving into the home. He is an autocratic religious bigot who — with his father’s enabling — takes over authority in the house. His mother is also plagued with religious intolerance, but also is a loving influence. Will and his grandfather clash over several years, with Will slowly defying his parents, and the community. He turns into a known troublemaker, non-conformist, “bad seed.”

There is a chapter, early in the book, in which Will, in his upper mid teens, is seduced by an unhappy early-middle-aged female librarian, who harbors a past romantic grudge against his father. The sexual seduction passages are not explicit, but is a bit shocking, perhaps more today where a mature adult seducing an impressionable teen is considered a criminal offense rather than a “rite of passage.”

When Will turns 18 his father describes in detail the Fitzgerald family curse, which evolves from an Irish descendant named Dennis who turned traitor in the old country. Due to the treachery, a curse was placed on one male child of each generation. Several sons die ignoble deaths. In Will’s family, the “cursed” one is predicted to suffer a fate worse than death. Although Will has heard his father scoff at the curse’s veracity, listening this time, he senses his father believes he is cursed. He leaves his family at 18 on very formal, chilly terms, determined to become a gambler, head West, and build an empire. (I forget to mention that the aggrieved father who set the curse dictated that all male descendants of the traitor carry the middle name, Dennis.)

Will’s travels through the West and the early years of his adult life take him through St. Louis, where he meets a mentor who teaches him to gamble successfully, with advice to live a detached life. Regarding women, the mentor says, “Why buy a cow when milk is so cheap.”

Silver Plume, Colorado, which is a real place (I’ve been there) is the next major, long-term stop in Will’s education. He takes a high-level gambling position with a successful saloon owner, with an eye toward buying the saloon’gambling hall one day and having his empire. He also gains a measure of prominence in the mining town. As always there are very descriptive characters, sort of Damon Runyun-esque, if the late Broadway scribe had written about the mining town West, about parlor house madams, female saloon owners, bullies, gamblers, miners, old-timers …

His tenure in Silver Plume teaches a maturing Will several harsh realities caused by the life choices and viewpoints he’s followed. He initiates a physical relationship with a beautiful showgirl, mistaking lust and a desire to possess her for love. She wants a wedding ring, and eventually leaves the relationship.

Later, he falls even harder for a newspaperman’s daughter. She’s a pretty young woman, charitable and religious. She represents conventionality, something that Will has rejected. My opinion is that Will sees in her the values he first learned in his youth. He mistakes his response to her purity, charity and friendship as love. She rejects him, preferring a more conventional mate, and a  conventionally decent life, although she lacks the maturity to understand that the “decent” homes she tells Will she wants her children to play in may not not necessarily be populated with decent adults.

Will painfully discovers, during his failed courtship, that prominent men with whom he rubs shoulders with will never accept him into their society or families.

It’s actually a blessing that she rejects him, but it crushes Will, who leaves Silver Plume and wanders for a long time — distracted — until he wills himself to forget her. His despair during that time causes him to think that maybe he is a cursed Fitzgerald.

Will eventually makes his way to Silverlode and uses his gambling skill to win The White Horse Saloon in a high-stakes game with the owner, but has to outdraw and kill him afterward. Soon after, he finds a healthy, lifetime love.

“Uncle Will and the Fitzgerald Curse” is a great read, as satisfying as “Papa Married a Mormon” and “Mama’s Boarding House.” I sense it didn’t sell as well as the others. It’s a very expensive book to buy used; I’ve only seen first editions for sale. I owned a copy for years, but lost it in a 1997 move across country. I finally bought a copy for $150 a few weeks ago. Usually copies run $250 and above. I’ve added three links (here, here and here) to buy used copies. (I will add that I am skeptical of any offer for under $100). Readers who can’t afford a copy should write to libraries and see if they will photocopy the book for a reasonable price. The book is out of print, so I imagine there is no legal impediment. I have receives photocopied pages of books from libraries.

I’ve written a lot about Fitzgerald and his work, on another blog, Plan9Crunch. Here is one and another is a review of the film version of “The Great Brain.” It was released in 1978.

Fitzgerald researcher Carrie Lynn runs the valuable Finding Fitzgerald blog. She is also the author of a recent book, Finding Fitzgerald. It answers many long sought-after questions about the people who represented the characters in Fitzgerald’s novels and how the author’s hometown of Price, Utah, represents both “Adenville” and “Silverlode.” You can buy Finding Fitzgerald here. I have done a review of the book here and interviewed Ms Lynn here. (Below is a photo of author John D. Fitzgerald). (This review is cross posted at Culture of Mormonism blog.) 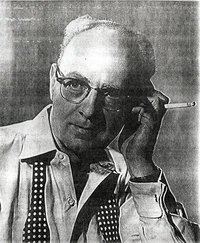