Posted on June 26, 2022
You are here: Home / At TMV / Ukraine Issues New Stamps with a Mocking Twist 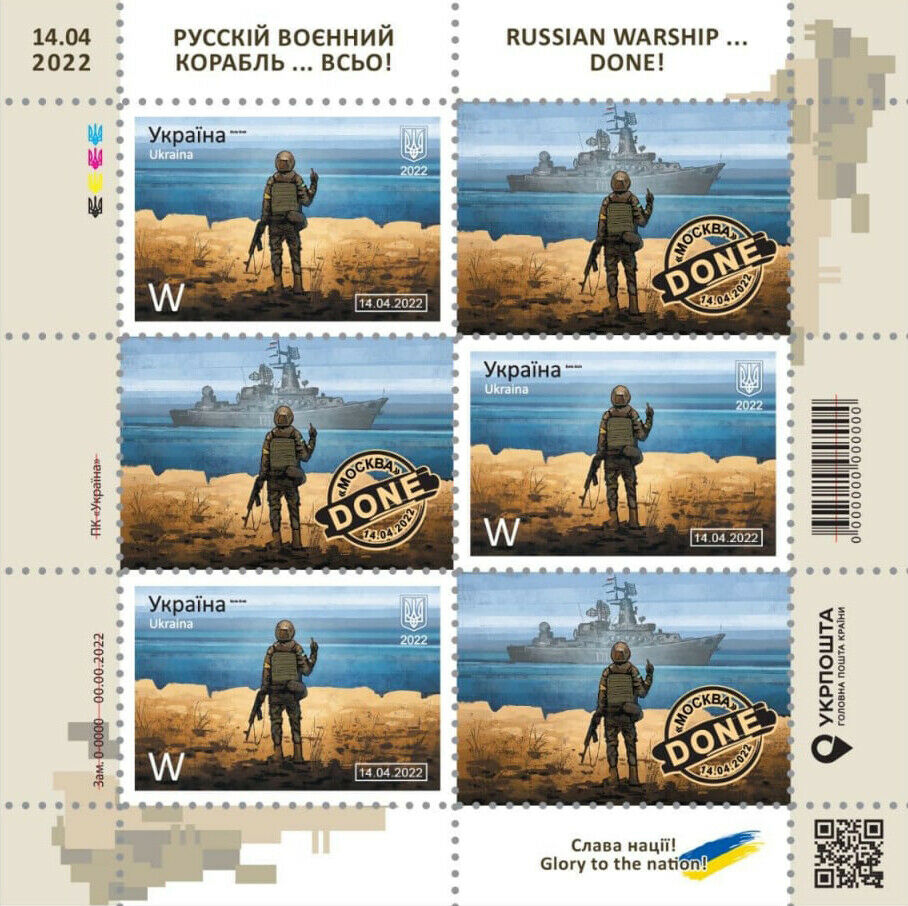 One of the most iconic moments of the Ukraine war occurred a few months ago when the Russian flagship Moskva, cruising offshore across from the now famous Snake Island, demanded that the small but brave contingent of Ukrainian border guards stationed on that rocky outcropping surrender.

The response was unmistakably clear. “Russian warship, go f*ck yourself,” the guards replied and gestured.

A few weeks later, on April 13, those words and gesture were immortalized on a stamp (below) issued by Uktposhta, the national Ukrainian postal service, a stamp that sold like wildfire in Ukraine and around the world.

As so happened, the very next day, Putin’s pride and joy was struck by two Ukrainian RK-360 Neptune anti-ship missiles and now she rests at the bottom of the Black Sea.

On Monday, Ukposhta issued another set of postage stamps commemorating the initial moment of defiance but also the sinking of the Russian Moskwa.

And they have done it with a twist of grim humor, skill and scorn.

The new release includes, in addition to the original stamp that showed the Moskwa looming offshore, one with the Moskwa gone, “done.” As some of the inscriptions on and around the stamps say: “Russian warship… Done!” “Death to enemies!” “Glory to the nation!”

And, as before, Ukrainians are lining up by the hundreds across the country to buy what certainly will not only be a philatelic collectors dream, but also a treasured Ukrainian memento.

While one million stamps were issued the first time, this issue is planned to be five million.

The photo above shows President Volodymyr Zelenskyy taking part in a special cancellation ceremony of the postage stamp during which he said:

Things like this stamp are first and foremost symbols that help us believe in our victory. That we will definitely win this war, and the occupier will go to the bottom. People’s interest in these stamps proves that. I am convinced that we will have many more such symbols of victory.

The previous issue of the stamp raised about $135,000 which went towards the Ukrainian war effort.

The proceeds from the sale of this issue will go to a foundation focused on “helping doctors, the military and civilians.”