Posted on January 10, 2022
You are here: Home / Featured / U.S. Intellligence: Russia is planning huge military operation with 175,000 troops against Ukraine 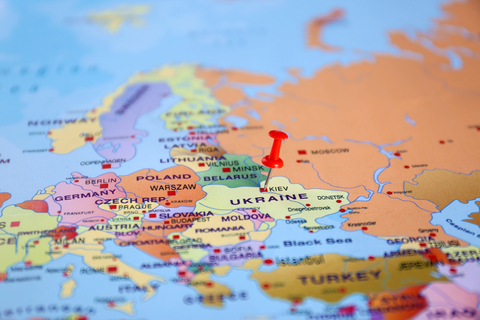 As tensions mount between Washington and Moscow over a potential Russian invasion of Ukraine, U.S. intelligence has found the Kremlin is planning a multi-front offensive as soon as early next year involving up to 175,000 troops, according to U.S. officials and an intelligence document obtained by The Washington Post.

The Kremlin has been moving troops toward the border with Ukraine while demanding Washington guarantee that Ukraine will not join NATO and that the alliance will refrain from certain military activities in and around Ukrainian territory. The crisis has provoked fears of a renewed war on European soil and comes ahead of a planned virtual meeting next week between President Biden and Russian President Vladimir Putin.

“The Russian plans call for a military offensive against Ukraine as soon as early 2022 with a scale of forces twice what we saw this past spring during Russia’s snap exercise near Ukraine’s borders,” said an administration official, speaking on the condition of anonymity to discuss sensitive information. “The plans involve extensive movement of 100 battalion tactical groups with an estimated 175,000 personnel, along with armor, artillery and equipment.”

The unclassified U.S. intelligence document obtained by The Post, which includes satellite photos, shows Russian forces massing in four locations. Currently, 50 battlefield tactical groups are deployed, along with “newly arrived” tanks and artillery, according to the document.

While Ukrainian assessments have said Russia has approximately 94,000 troops near the border, the U.S. map puts the number at 70,000 — but it predicts a buildup to as many as 175,000 and describes extensive movement of battalion tactical groups to and from the border “to obfuscate intentions and to create uncertainty.”

Washington Post columnist David Ignatius explained why the CIA is so worried:

The CIA discovered something scary in October: Russia was moving troops toward the Ukrainian border — and, unlike in previous border thrusts, was making secret plans about how to use them.

The agency also worried that the potential conflict zone didn’t appear to be just the eastern sliver of Ukraine occupied by Russian-backed separatists, which Russian troops had approached the previous April, but a much broader swath of the country. Alarm bells rang at the agency, and then across the U.S. government.

Reports of the Russian buildup couldn’t have come at a worse time. President Biden was seeking improved relations with Moscow after his June summit meeting with Russian President Vladimir Putin in Geneva. The Russians seemed to be reciprocating with dialogue on cybersecurity and strategic stability. And the administration had signaled support for an eventual diplomatic deal on Ukraine that would give Putin much of what he wanted.

The tension mounted through November. CIA Director William J. Burns rushed to Moscow at the beginning of the month to warn the Russians that an invasion of Ukraine would shatter the Russian economy and void any hope of rapprochement with the West. But Putin didn’t seem to be listening. The Russian buildup continued, accompanied by defiant rhetoric.

As the Ukrainian crisis enters December, the Biden administration is pursuing what policymakers like to call a “dual strategy.” To deter a Russian invasion, Secretary of State Antony Blinken will meet Wednesday with NATO allies in Latvia to share U.S. intelligence and discuss joint military plans to raise the cost of any Russian invasion. At the same time, the White House has continued high-level conversations with Moscow that could lead to a meeting between Biden and Putin, virtual or in person, before year end.

Russia isn’t backing down. It has nearly 100,000 troops close to the border, and administration officials expect that number could increase soon. As NATO plans for contingencies, Russia is boasting of its “unbreakable” military alliance with Beijing. Putin speaks of Moscow’s eternal bond with Kyiv in nearly the same way that Chinese leaders demand reunification with Taiwan. He offered a rationale for war in an emotional essay in July arguing that Ukraine and Russia were inseparable.

The human cost of Russia’s war on Ukraine will be born by these citizens/soldiers.

Russia’s aggression will not end there and will inevitably place our own soldiers closer to peril.

Ukraine is the frontline of freedom and democracy. https://t.co/W0sTSzvmxr

New: Russia has positioned more forces near the Ukraine border and is erecting supply lines such as medical units and fuel that could sustain a drawn-out conflict should Putin move to invade, officials tell CNN. with @jimsciutto @barbarastarrcnn https://t.co/7OHyTvy3uc

U.S. Secretary of State Antony Blinken told the #ReutersNext conference that President Biden will tell Russian President Putin that the U.S. is determined to stand resolutely against any reckless actions that Russia may pursue and to defend the territorial integrity of Ukraine pic.twitter.com/QASbKWLRhg