Posted on September 21, 2020
You are here: Home / Featured / ‘Tyrannical and Un-American’: ACLU Rebukes Barr for Urging Sedition Charges Against Protesters 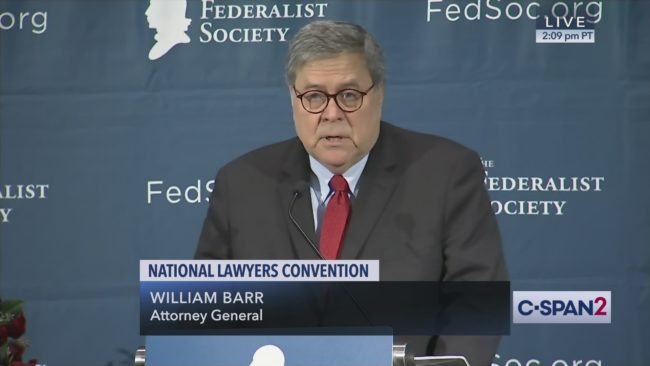 “Treating protest as a form of sedition won’t hold up in court,” said the ACLU. “But that is clearly not the point here.”

The Wall Street Journal reports Barr’s directive came during a conference call last week in which the attorney general warned that protests—which have been overwhelmingly peaceful and focused on racial justice—could increase as Election Day approaches.

Attorney General William Barr told federal prosecutors to be aggressive in charging violent demonstrators, including potentially prosecuting them for plotting to overthrow the government, say people familiar with the talks https://t.co/hu4TzCOMqt


Two people familiar with the call told the Journal that Barr urged prosecutors to seek federal charges wherever possible—including a rarely-used sedition law meant to punish people who conspire to overthrow the U.S. government.

However, legal experts noted that in order to successfully charge someone with sedition, prosecutors must prove that they were part of a conspiracy to overthrow the government or attack government officials, or that they posed an imminent threat to the nation.


“Treating protest as a form of sedition won’t stand up in court, but that is clearly not the point here,” Somil Trivedi, a senior staff attorney with the ACLU’s Criminal Law Reform Project, said in an email to Common Dreams. “This is a tyrannical and un-American attempt to suppress demands for racial justice and an end to police violence. Independent and ethical prosecutors should reject this administration’s authoritarian impulses.”

This is a tyrannical and un-American attempt to suppress our demands for racial justice and an end to police violence. https://t.co/7X8FeaV037


Some observers warned that aggressively prosecuting protesters could have a chilling effect on constitutionally-protected free speech, assembly, and expression.

1 Violent crime should be addressed appropriately, altho most often, it is a matter for state, not fed'll, prosecution. The risk here is Barr's directive will have a chilling effect on peaceful protest & free speech especially given the unusual suggestion to use the Sedition Act. https://t.co/sQxFlVEYrO


Others wondered whether sedition charges would apply to violent right-wing protesters who support Trump.

Does this apply to the armed Boogaloo Boys, too?? ?https://t.co/HjX1MwAH5H


Both Barr and President Donald Trump have (often falsely) blamed left-wing and anarchist protesters, including members of the Black Lives Matter movement and people who loosely identify under the Antifa umbrella, for most of the violence during the ongoing protests that began earlier this year after police and white supremacist killings of Black and Latinx people including George Floyd, Breonna Taylor, and Ahmaud Arbery.

However, a study by the Armed Conflict Location & Event Data Project (ACLED), which analyzed more than 7,750 Black Lives Matter demonstrations in all 50 states and Washington D.C. that occurred between May 26 and August 22, found that fully 93% of the protests were peaceful.

Nevertheless, the president has called the Black Lives Matter movement—the latest iteration of the centuries-old Black struggle for equality and justice—”a symbol of hate.”

NYC is cutting Police $’s by ONE BILLION DOLLARS, and yet the @NYCMayor is going to paint a big, expensive, yellow Black Lives Matter sign on Fifth Avenue, denigrating this luxury Avenue. This will further antagonize New York’s Finest, who LOVE New York & vividly remember the….


Trump has made “law and order”—replete with thinly-veiled racist appeals to white voters—a pillar of his re-election bid. He has habitually downplayed right-wing violence, even as his own Department of Homeland Security warned earlier this month that white supremacist pose the greatest domestic terrorist threat, and even as white supremacists keep attacking and killing people.

In 2017 the president infamously called neo-Nazis and other white nationalists who attended the Charlottesville, Virginia protest where anti-racist protester Heather Heyer was murdered “very fine people.”

Despite the growing white supremacist threat, Trump revoked funding for the federal program tasked with countering violent extremism, while focusing his ire on the overwhelmingly peaceful Black Lives Matter movement. The president and some of his prominent supporters have repeatedly conflated the movement for Black lives with what the FBI for a while called “Black identity extremists.”

For more discussion on this issue GO HERE.