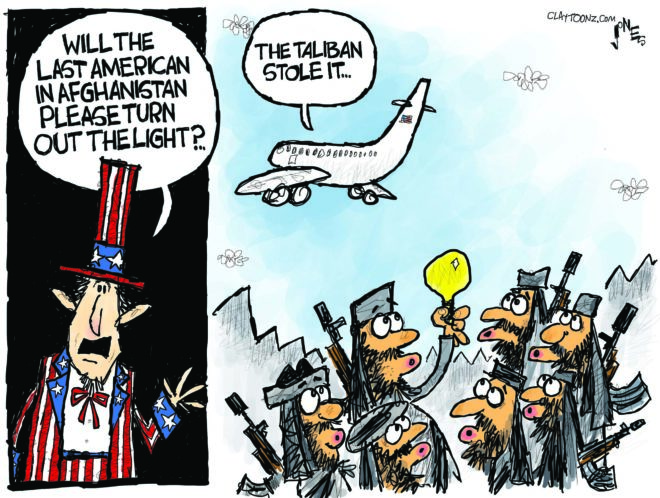 I have a very non-bold prediction. A year from now, a majority of Americans will be satisfied with the way President Biden handled the withdrawal out of Afghanistan. And those still giving him low marks won’t remember why. Case in point: We lost fewer Americans in Afghanistan than we lost to Covid during the Trump presidency (sic), a virus he admitted he downplayed. Ask a Republican about that now and he’ll give you the same look a dog gives after he’s asked to tell the ingredients of moussaka.

This is leadership. Republicans don’t recognize it because they’re Trump supporters.

Biden has made mistakes with this ordeal he inherited, mostly with his prediction that Afghanistan wouldn’t fall to the Taliban. But outside of that, I don’t think you can blame him for anything. Last night, a few political prognosticators were clamoring for a resignation from the White House over this. Who do they want to resign? They don’t know…just someone. Someone has to pay. Except we already fired the guy who made this shitty evacuation deal with the Taliban, so we’re good. Also, how do you fire someone for doing exactly what you told them to do?

Yesterday, I saw a lunatic on social media describe the withdrawal as nothing but a disaster for President Biden. Yet, over 123,000 people were evacuated in a span of two weeks. That is not a total disaster. Yes, a lot of people were left behind, including Americans. But President Biden showed leadership and stuck to the deadline. Were we supposed to extend the deadline again and bring in more troops to do it right? I don’t care how many people you airlift out of Afghanistan, there will will always be someone in Afghanistan who wants to get out of Afghanistan. It’s like Mississippi that way.

Remember, this withdrawal was set by a deal Donald Trump and Mike Pompeo made with the Taliban. A lot of people say we should have started our withdrawal earlier, but the Afghanistan government asked us not to out of fear there would be a mad rush to the airport creating a humanity crisis…which happened anyway. So, how could we have avoided this “disaster”? Answer: We couldn’t have.

But for some reason, despite this being such a huge “disaster” for President Biden, Republicans still have to make stuff up.

The Taliban’s seizure of U.S. weaponry has been covered extensively. There are fears the Taliban will use these weapons against the United States. But, even if the Taliban could somehow fly Black Hawk helicopters across oceans halfway around the world, or drive the stolen Humvees to our shores, they promised they would never attack, or allow any group from inside their nation, to attack America. This is in the deal made by Donald Trump. I mean, it’s like Republicans suddenly don’t have faith in Donald Trump as a great dealmaker anymore. But, just like the treaty he signed with North Korea, there are not actual obligations or accounting required from the Taliban in the Trump deal. Even the part about negotiating peace with the Afghan government only required the Taliban to think about trying to make peace with the Afghan government maybe possibly kinda sorta.

Republicans, stop getting your news from 4chan and YouTube. Also, maybe don’t buy into Taliban propaganda. I know it’s hard because it’s so similar to Trump propaganda.

Then, Republicans found a photo of a bunch of dogs in crates. The Washington Times reported they were rescue dogs abandoned by the U.S. military…and Joe Biden. Also, none of the dogs were house trained. Goddamn you, Joe Biden! Again, it wasn’t true. They were not military dogs or owned by the United States.

Republicans, stop getting your news from The Washington Times, which is literally owned by a cult.

A lot of these idiots say we should have taken all this military equipment with us when we left Afghanistan. The problem with that brilliant idea is that it didn’t belong to us. It belonged to the Afghanistan government. Republicans are very simplistic thinkers.

They’re also lying about the cost of the equipment left behind with some claiming it’s over $80 million when it’s actually closer to $16 million.

The truth is, all that military equipment has already served the purpose it was made for. That purpose was for the military industrial complex to make money. The U.S. defense industry is all about making money off the backs of taxpayers, which means they have to keep producing weaponry, even if those weapons are never used.

Currently, the Lima Army Tank Plant in Ohio produces 11 Abrams tanks a month. These tanks are about $6-8 million each. What are we doing with these tanks? We’re putting them in storage. We already have over 4,000 tanks in storage and the military has actually said it has enough tanks. But nope. The government keeps ordering more tanks.

The other thing about the military industrial complex is that it makes shit to fall apart. A Toyota hatchback will last two decades longer than a $8 million Abrams tank or a $10 million Black Hawk helicopter. All those tanks in storage will fall apart just by sitting there, and then we’ll spend millions upgrading them, and then upgrade again when the upgraded stuff falls apart. It’s why I’m not that concerned with the heavy machinery and aircraft seized by the Taliban. And when that shit breaks down and they need to reorder parts from the U.S. government, good luck with the U.S. government’s automatic voice greetings.

“Thank you for calling the U.S. government’s tank and helicopter parts division. Your call is very important to us. Currently, our operators are assisting other customers. You’re our 87th caller…someone will get to your call shortly. If you would like to hang up and have a service representative return your call….” Spoiler: Nobody’s going to return your call. Also, after waiting two hours to be number two in line, it will hang up on you. It’s scary how I know all that by heart…and you do too.]

As for all the material we left behind, it’s another cost of this two-decade failure. Let it go. And I would have told the last American soldier in Afghanistan to turn out the light, if there were actually any lights in Afghanistan.