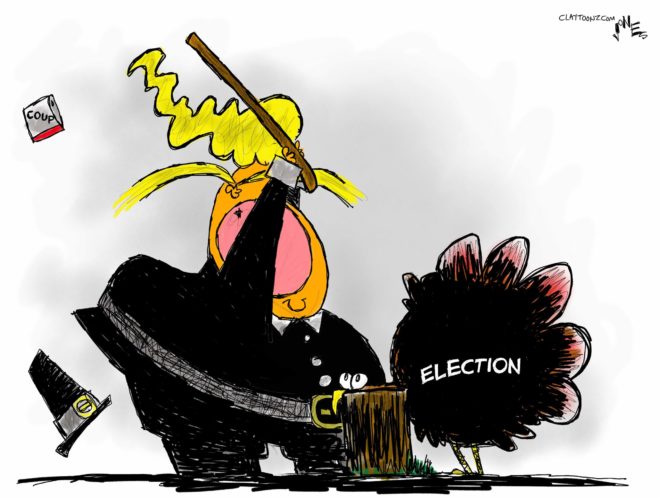 The head of the General Services Administration, a low-profile agency that directs resources for stuff like government real estate and oh yeah…transition funds from one presidential administration to the next, announced it was approving the transition to the Biden administration.

After a presidential election when a new leader is elected, the GSA routinely releases funding to the new administration so there will be a smooth transition between the election and when the new president takes the oath of office in January. Although the head of the agency is appointed by the outgoing president, there’s usually no drama over this person doing their job. That was not the case this time.

Even if by some bizarro-world situation where Trump flipped states and would remain president for the next four years (Brrr! I just got a chill), nothing would have been lost by preparing for a Biden presidency. No harm would have been done. If Joe Biden was receiving the same daily intelligence briefings as Donald Trump, it wouldn’t have been a risk to this nation.

Emily Murphy released a statement saying, “I was never directly or indirectly pressured by any Executive Branch official — including those who work at the White House or GSA — with regard to the substance or timing of my decision.” Bullshit.

Emily Murphy is a coward and she should have done her job in the first place. She shouldn’t have waited 16 days. She is just another Trump goon who put the cult before duty. Even though she was hired by Trump, she works for the citizens of the United States of America, not Donald Trump. She is paid by us, not Donald Trump. She should have done her job.

Emily Murphy, you are not a hero. You are not brave. You are a failure and a sycophant of the cult. You’re no better than Kayleigh McEnany, Stephen Baby Goebbels Miller, or Steve Baby Fishmouth Mnuchin. And just like all the MAGAts Trump brought with him, I look forward to your dismissal after January 20.

Donald Trump is boasting he has delivered a vaccine to the coronavirus. He really didn’t have anything to do with that but still, his stonewalling the Biden transition endangers the distribution of the vaccine after he’s gone.

Donald Trump hasn’t just be trying to discredit the Biden administration. His actions were an attempt to make it fail. And if that means more Americans died, for Donald Trump, so be it. It’s not like he cared about Americans dying from the virus before the election. If more Americans die after Trump leaves office, even if it’s his fault, he can blame Biden and tweet about it.

Now, he’s going to pin a medal on himself for approving the transition. Donald Trump tweeted he told Murphy to release the transition funds while Murphy is saying she made the decision on her own. These people need to coordinate their bullshit.

Even If Murphy never did release the funds before January 20, it wouldn’t have stopped Joe Biden from becoming president. While Trump goons say the media doesn’t decide who wins elections, neither does the GSA or the president (sic). Joe Biden will be president on January 20 and there’s nothing Donald Trump or Emily Murphy can do about that. But, they’re still going to give the impression Donald Trump allowed it.

Prediction: Donald Trump will be praised by the Trump media and MAGAts for being a big boy and getting out of the way for Joe Biden. You’ll see. Geraldo Rivera wants to name the vaccine to the virus that Donald Trump allowed to kill over 250,000…after Donald Trump to “honor” him. That’s how these people are. We should NOT name any vaccine after Donald Trump. We have named the virus after him. He is the virus, not the cure.