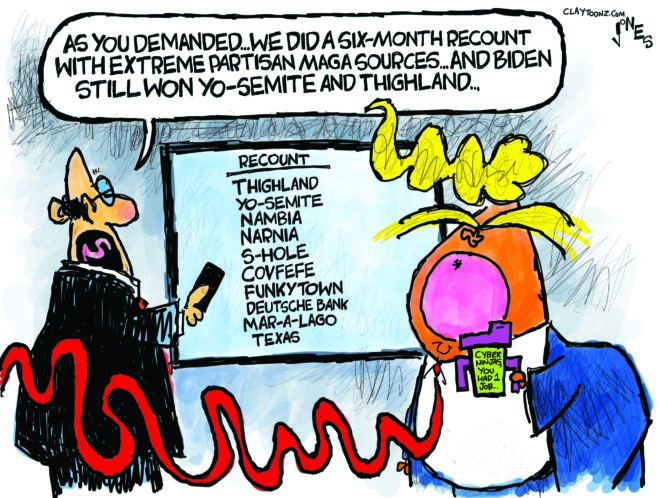 Every time dumbass Donald Trump tries to steal the election, all he does is add more evidence and validation that he lost and Joe Biden won.

All the evidence Trump lunatics claim they have has yet to be presented. Probably because those lunatics, Sidney Powell, Rudy Giuliani, and the MyPillow jerk, don’t have any real evidence. There was no ballot switching by voting machines or Italian satellites. There was no interference by the Clintons or George Soros. There was no manipulation by poll workers or the dead Hugo Chavez. There was no massive voter fraud. There was very little fake voting by dead people and undocumented immigrants. Most voter fraud that was found was committed by Republicans. The biggest case of election interference and fraud was committed by the President (sic) of the United States at that time, Donald Trump.

When Donald Trump called the Georgia Secretary of State, he said all he needed was enough votes that would give him one more than Joe Biden had. There were no reports of missing or uncounted votes. On election night while he was ahead, he demanded election officials stop counting votes. Weeks later, he was demanded that Georgia create votes. And the biggest evidence of Trump’s meddling was his not asking to find every “missing” vote, but just enough to give him one more than Biden had.

When Trump supporters who believe The Big Lie (that the election was stolen from Trump) are asked for any evidence to base their beliefs on, the best they can come up with is that Biden winning is just not believable to them. They don’t see how Joe Biden could beat Donald Trump.

They also say they can’t believe Trump lost because Joe Biden didn’t campaign as much. If he had, his margin of victory over Trump would have probably been greater than the seven million it was.

And now we have more evidence Donald Trump lost the election because the recount in Arizona has confirmed he lost. In fact, that recount took votes away from Trump and gave more to Biden.

Most recounts are done in a day or two. This took six months. It started last April, six months after the election. This fraud of an audit actually cost Arizona taxpayers over $6 million. But that Republican-led chicanery was a bargain compared to California’s bogus recall that cost around $300 million. Remember when conservatives were supposed to be the fiscally-conservative guys?

Now, Donald Trump wants Texas to conduct an audit of the election which is weird because Trump won Texas. Greg Abbott, Texas’ horrible governor, caved into Trump’s demands and announced that a “full and comprehensive forensic audit” of four counties, three that Biden won, has already started, except it hasn’t.

Why does Trump want a recount in a state he won? Because Texas has a Trump cultist as its governor and this is another attempt to cast doubt on the election. In his demand to the governor, he referred to the election as a “scam.” It’s a scam in a state he won? He better be careful because he only won Texas by 5.5 percent. It could turn out like it did in Arizona and take votes away from Trump and give more to Biden. Maybe after they finish this recount, Biden will have won Texas too.

Republicans are also trying to copy Arizona’s recount in Wisconsin and Pennsylvania. Naturally, these recounts are partisan and being attempted by Trump goons.

Here’s the thing though, kids. Trump lost. And he keeps losing. In fact, new reports are revealing his White House knew he lost and there wasn’t any fraud.

All they’re doing with these recounts is giving more confirmation that Joe Biden is the president of the United States of America.

And the continued claims the election was fraudulent only works to tear down our democracy. Continuing with The Big Lie is the most un-American thing a lot of these people do. It’s almost as un-American as voting for Donald Trump.

Visit Clay Jones’ website and email him at [email protected]>.