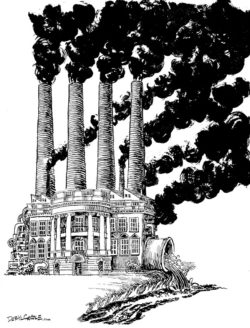 WASHINGTON — Someday, in the not-so-distant future, sea-level rise could claim Mar-a-Lago. Perhaps President Trump — by then no doubt disgraced, shunned and all but forgotten — would still be around to see his beloved Florida resort wiped out by a “Chinese hoax.”

Of all the wrongheaded policies Trump and his Republican Party insist on pursuing, their stubborn denial of climate change is the most baffling — and the most obviously self-destructive. Everything is personal with Trump. Can’t anybody get it through his head that his own coastal properties are urgently threatened? And that he is going out of his way to hasten their demise?

The National Oceanic and Atmospheric Administration reported Thursday that July 2019 was the hottest month on planet Earth since record-keeping began in the years after the Civil War. Wherever you live, think back to all the punishing heat waves you’ve experienced. Globally, July was worse.

The month saw unprecedented triple-digit temperatures in parts of Europe where summers are usually mild at best. On July 25, thermometers in Cambridge, England, soared to 101.7 degrees — an all-time record for the United Kingdom. That same day, Paris saw a high of 108.7, which broke the previous all-time record by a full four degrees. Meanwhile, much of the United States baked in an unrelenting heat wave, with day after day in the 90s. And earlier in the month, Alaska saw its highest temperatures since record-keeping began, with residents of Anchorage enduring a Floridian 90-degree afternoon.

July also saw the area covered by polar sea ice shrink to record lows in both the Arctic and Antarctic regions, according to NOAA. In the Arctic, there was almost 20% less ice than normal, or what used to be normal.

“Yes, but it snowed the other day in Australia,” denialists will say. Well, of course it did. It’s winter down there. Global warming doesn’t mean the seasons no longer march through their yearly progression. It just means that, on average, the planet is warmer than it used to be. It means that heat waves are becoming worse and more frequent, it means that weather patterns are changing, and it means that anomalous phenomena are being seen in the unlikeliest places. Thunderstorms generally occur in temperate and tropical zones. A few days ago, one was detected within 300 miles of the North Pole.

There is no longer a debate among climate scientists about the cause of global warming. Since the Industrial Revolution began roughly 250 years ago, the large-scale burning of fossil fuels has increased the concentration of heat-trapping carbon dioxide in the atmosphere by more than 40%. Increase any variable by 40% — your monthly salary, say — and you are bound to feel an impact.

If you watched any of the television specials last month commemorating the 50th anniversary of the moon landing, you saw grainy interviews with the early astronauts, who said they were struck at how thin and fragile the atmosphere looks from space. Humankind is perfectly capable of befouling it — and we’re well on the way.

The warming process is proceeding more rapidly in some places than others. The Arctic, for example, is heating up so quickly that shipping lanes are being charted across the Arctic Ocean, where summer now sees open water in vast areas once covered with ice. Within the United States, according to an analysis by The Washington Post, the northeast corridor between Philadelphia and Boston has seen much more warming than inland parts of Alabama and Mississippi, which have seen very little.

Sea-level rise is real, undisputed and relentless. It is also gradual, measured annually in millimeters — for now. But warming has destabilized ice shelves in Antarctica and Greenland, and some scientists worry they could give way rapidly and catastrophically. Even if this does not occur, steadily rising seas plus bigger, wetter storms — another result of climate change — pose a deadly threat to coastal communities. Like Palm Beach.

When you find yourself in a hole, you need to stop digging — in this context, switch to clean energy sources and stop emitting carbon. But first you have to admit you’re in a hole, and that’s what Trump and his enablers refuse to do. Trump incredibly wants to increase the burning of coal, the dirtiest fuel in terms of carbon emissions.

Much of the damage this administration is doing can, and I believe will, be repaired after Trump is gone. But we will never get back the precious time he is squandering on climate change. If he retires to Mar-a-Lago, he’d better be able to swim.