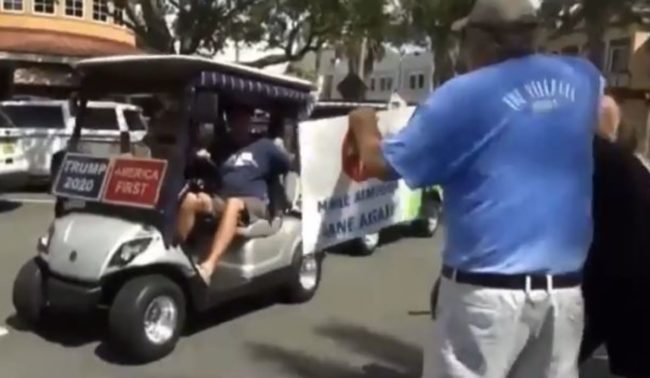 President Donald Trump today tweeted a video in which a supporter yelled “White power!” It sparked a big backlash and the tweet was deleted. The explanation was predictable: Trump hadn’t really seen or focused on that, he was focused on all the people there who support him. ETC.

The New York Times’ story has this subhead: “The president later deleted the tweet, which once again showed his willingness to use social media to amplify some of the most hateful commentary of some of his followers, even at a moment of unrest.” Here’s some of the Times’ report:

President Trump on Sunday retweeted a video of one of his supporters yelling “White power!,” once again using the vast reach of his social media platforms to inflame racial divisions in a nation roiled by weeks of protests about police brutality against black people and demands for social justice reforms.

The edited racist video shows a white man riding in a golf cart bearing “Trump 2020” and “America First” signs during what appears to be an angry clash over the president and race between white residents of a Florida retirement community. Mr. Trump deleted the tweet more than three hours after posting it.

In response to a protester shouting “Where’s your white hood?” and other taunts, the man in the golf cart pumps his fist in the air and says “White power!” twice. The two-minute video continues to show profane exchanges between protesters and other Trump supporters riding on more golf carts.

The president retweeted the video to his millions of followers just after 7:30 a.m., thanking “the great people of The Villages,” the Florida retirement community where the clash apparently took place. He added: “The Radical Left Do Nothing Democrats will Fall in the Fall. Corrupt Joe is shot. See you soon!!!”

The tweet was widely criticized as racist and insensitive, and again demonstrated the president’s willingness use social media to amplify some of the most hateful commentary of some of his followers, even at a moment of national unrest.

Senator Tim Scott of South Carolina, the only black Republican senator, called the video “offensive” and asked Mr. Trump to take it off his Twitter page.

“There is no question he should not have retweeted it, and he should just take it down,” Mr. Scott said on the CNN program “State of the Union.” “We can play politics with it or we can’t. I’m not going to. I think it’s indefensible. We should take it down.”

Mr. Trump deleted it less than an hour after Mr. Scott’s comments, but he did not condemn the “white power” statement or specifically disavow the sentiment expressed by his supporter.

Judd Deere, a White House spokesman, said Mr. Trump “is a big fan of The Villages.”

“He did not hear the one statement made on the video,” Mr. Deere said. “What he did see was tremendous enthusiasm from his many supporters.”

Dear @JuddPDeere45: You are lying when you said @realDonaldTrump did not hear the one statement. White power was repeated multiple times. You can’t watch that video & hear other words but not those words.

The American people are not stupid. Stop treating us as if we are stupid. https://t.co/Su6V4vKlAS

The signal was sent. https://t.co/Mlz8rMiN1L

Historians will not struggle to explain why widespread public recognition of racism happened to coincide with the Trump Presidency.

Today the President shared a video of people shouting “white power” and said they were “great.” Just like he did after Charlottesville.

We’re in a battle for the soul of the nation — and the President has picked a side. But make no mistake: it’s a battle we will win.

Any attacks the President’s team was planning on Joe Biden regarding race and Biden’s old comments died on June 28, 2020, when the President retweeted a video of a man chanting “white power.”

In early 2016 I was with a small group drinking with Lindsey at a hotel bar. He spent the majority of the time venting about how Trump is a racist.

Today Trump is literally tweeting White Power videos and Lindsey is golfing with his pal.

??, @LindseyGrahamSC. You sicken me. https://t.co/lVE2g1YtJO

President Trump just re-tweeted a video of some of his supporters shouting “white power!” It doesn’t get more explicit than this, folks.

Every company in America would immediately fire a CEO who retweeted a white power video.

President Trump, you can delete the tweet, but you can't delete your bigotry.

See you in November.

Trump “didn’t hear” the “white power” part and “didn’t hear” the intel brief on Russia paying Taliban to kill our troops. So, he’s a racist who betrayed our military…or just a dangerous dumbass — you choose. PS: 125k Americans are still dead from COVID. https://t.co/5OmPHTl6AZ